Writers seeking representation by a literary agent in the Age of the Internet have only to plop down at their computers to gain access to more information than most of us can assimilate. I’ve picked querytracker.net (QT) as my primary source, probably because it was the first site I spent much time with. Most sites have handy links to others, so branching out is only a click away from whatever “home” source you choose.

QT has three primary functions: 1) provide a forum on which members help each other with the task of writing the best query letters they can; 2) search a list of agents to determine which ones are likely candidates, and; 3) provide feedback to other QT members about the results of queries and interactions with the individual agents.

An initial search produces an alphabetical list of over 1200 agents. Selectable filtering criteria refine the search, and in my case, that meant agents who have indicated an interest in mysteries and thrillers and are currently accepting unsolicited queries from new writers. With these three filters, the list includes about 157 agents.

Sorting criteria allow you to further refine your list, and I chose to put at the top those agents who have proven to be the most likely to request additional material from QT members who queried them. Each agent’s name is linked to an individual screen with detailed information about the agent and the agency, their websites and blogs, and tabs allow you to refine your search by reading comments of QT members about the agents and generating a report showing the number of queries sent to the agent, replies, requests for full and partial manuscripts, and rejections. Below is a partial screenshot of my query list: 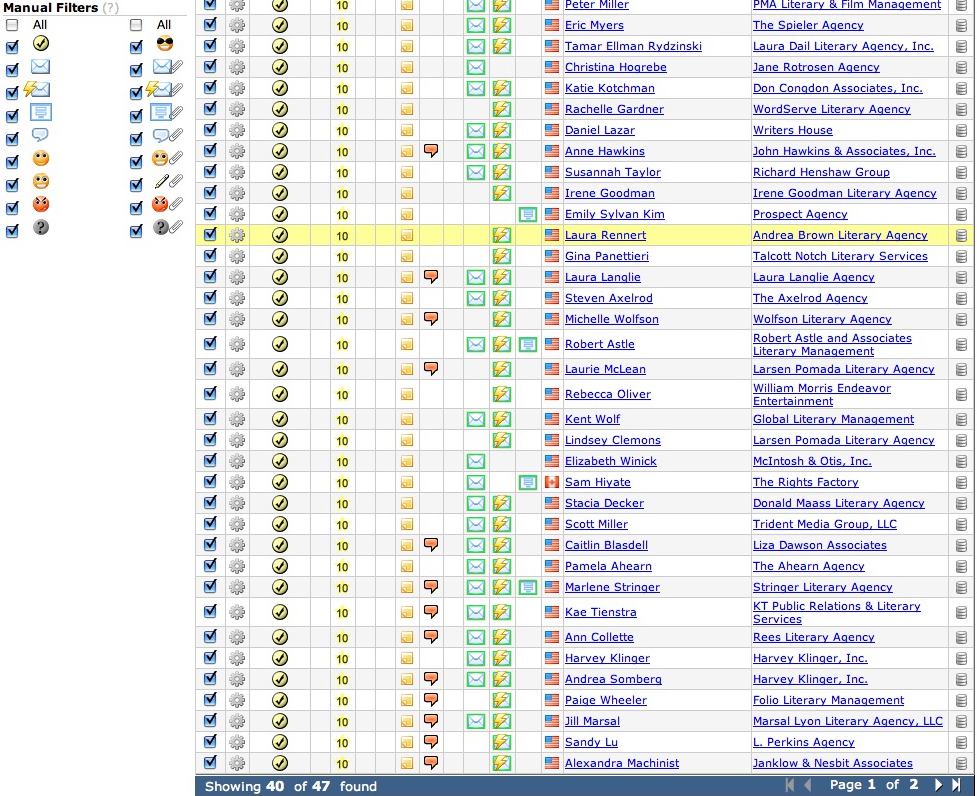 After perusing the data, you can choose to disregard the agent or add them to your list. Either of these actions opens a window for your personal notes about that agent. You can record the date of your query, the results, upload a copy of the query letter you sent, and that’s only a few of the options for managing the process. 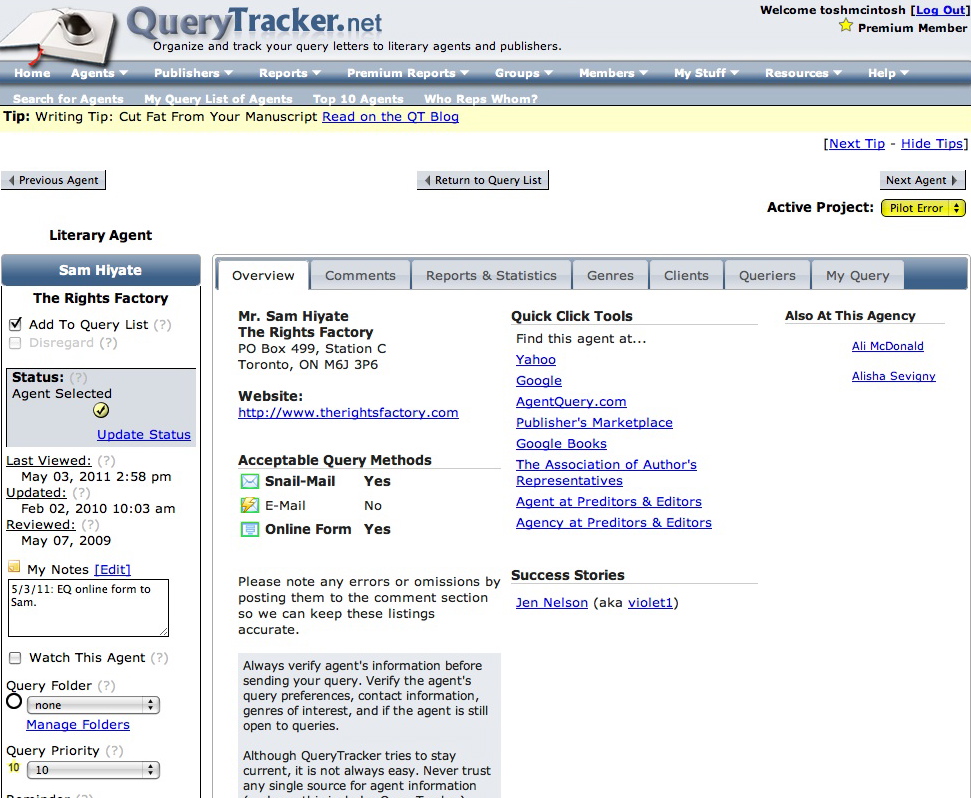 My “tactic” so far has been to generate a report for the past 30 days to determine how actively QT members have been querying each agent. Then I review members’ comments with particular attention to the past few months, and finally visit the agency website for the agent’s bio, specific interests, and submission guidelines. With all this in mind, I choose whether to add the agent to my list.

Not too many years ago, very few agents accepted queries by email. Today the majority do, and a significant percentage of those will not accept snail-mail queries. Although I understand why some agents only accept snail mail, I have to admit a slightly negative reaction and a tendency to disregard those agents, at least for the time being. It’s easy to take another look, because you can pull up your “disregard” list whenever you want.

Preparing an email query involves attention to detail no less than that required for one sent by snail mail. With different computer platforms and email programs, it’s essential to format the query in a generic way that presents it to the agent exactly as you prepared it. This is not the time to have some of the characters show up as question marks or asterisks because you used a font or special character the agent’s email program doesn’t recognize.

I write all my query materials in Word, which I can then print and send by snail mail when and if I decide to do that. To prepare them for an email, I strip the Word formatting in TextEdit (the Macintosh plain text program) and paste it into an email. Since the vast majority of agents will not open attachments to emails unless they have specifically instructed you to do so in their request for additional material, any writing sample and synopsis must be included in the body of the email with the query letter.

Initially, I intended to “personalize” the queries by finding something specific about each agent that I could mention in the query letter. Absent the best personal connections, such as having been recommended by a writer on the agent’s list, or having met the agent and pitched your novel at a conference, guidelines for doing this suggest comparing your novel to one or more the agent has represented, or referring to something relevant the agent wrote in a blog, or commenting about the agent’s website. It didn’t take me long to realize that this would probably be wasted effort. The query and any material included with it will either get the agent’s attention or they won’t.

With few exceptions, my query letters have been identical. Rather than typing each one into an email, I either copy and paste it from a “master” letter properly formatted for email, or use one already sent. This requires a bit of care, however, with changing the email address and the greeting. First impressions count, and an email to one agent addressed to another isn’t the way to dazzle anyone. More than one QT member has admitted that mistake in their comments.

The same tactic can be used with query letters accompanied by additional material. Once I had sent out enough queries, I’ve usually been able to carefully resend a previous one that satisfied another agent’s requirements.

Statistics as of this writing: 23 sent (mostly email), 11 rejections, and requests for 2 full manuscripts and 1 partial. Simple math indicates that 9 queries remain “out there” with me waiting for a reply. Being left in limbo is a common condition when engaged in the query wars. That begs the question of “What’s a writer to do?”

Some agents tell you to expect that a reply may take up to a specified number of weeks, and if you haven’t received a reply after that time, feel free to send what QT members refer to as a “nudge.”

Agents may also tell you up front that no reply means “No,” often with an apology that the number of queries they receive drives this decision. From the writer’s perspective, however, it could also mean the agent never got the query, or it’s buried in an over-filled inbox. Whatever the case, at some point your only choice is to label that query “closed/no response.” I haven’t done that so far, but the time will soon come when I’ll need to examine each no reply and either send a nudge or close out the query.

At this moment, 3 requests for additional material out of 14 replies is a respectable 21% request rate. Using simple math again, it’s easy to see that each closed/no response will reduce that record accordingly. Maybe that’s why I’m putting it off for a while. To manipulate the statistics.

Such is the life of a query warrior.