I decided to post these statistics periodically in a series of reports after installing the Count per Day plugin on October 14, 2010. Previous attempts have had to deal with retyping the information because a copy-and-paste procedure messed up the formatting. What follows is a series of “grabs,” also called “screen shots” or “captures,” of the Count per Day window. I began at the top and took three shots, then cropped them to present the relevant information.

It took me a while to figure out the procedure. And while there may be a better way, these are the steps with my Mac:

The result is what you see below, distorted somewhat and slightly blurred from all the manipulation. The images capture portions of the Count per Day window from top to bottom. Note: For a full screen version, put your pointer on the image and click. Return to this page by clicking the back button. 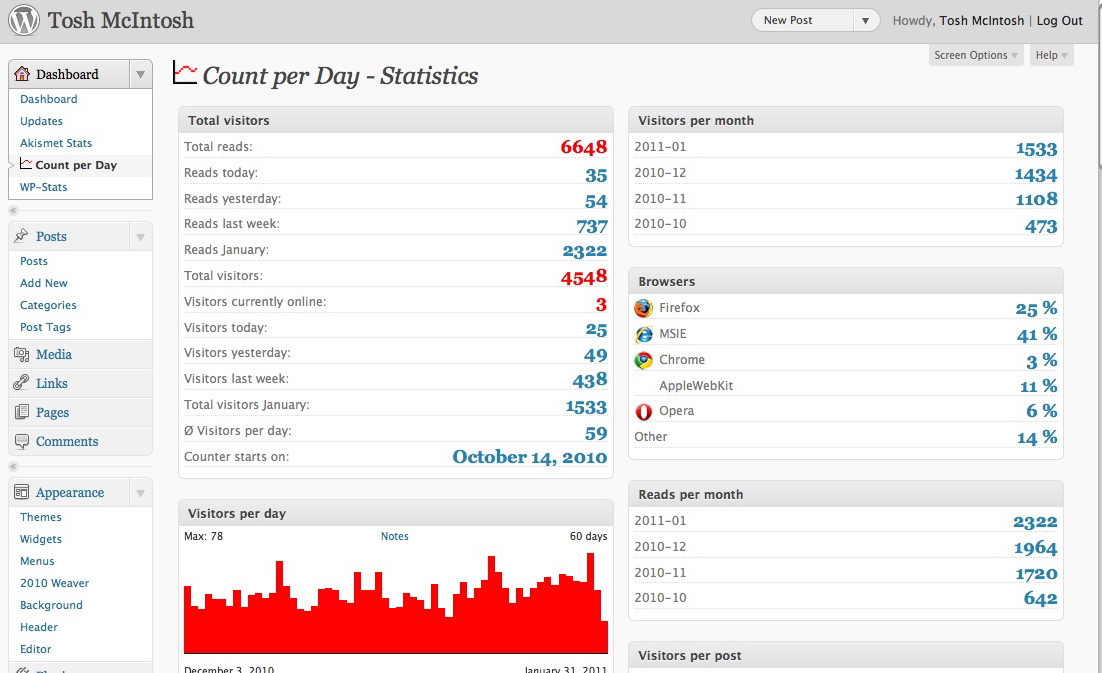 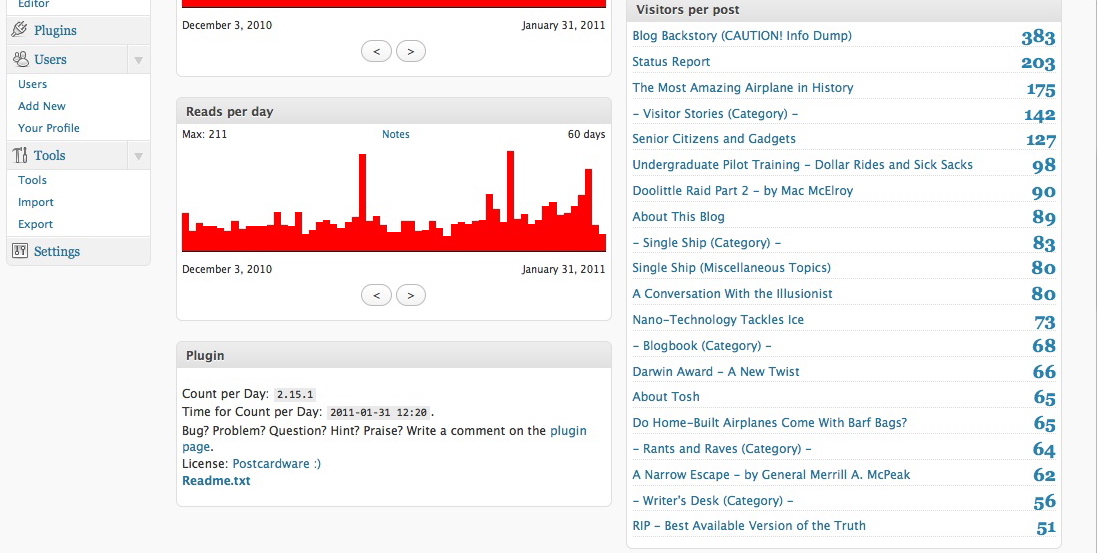 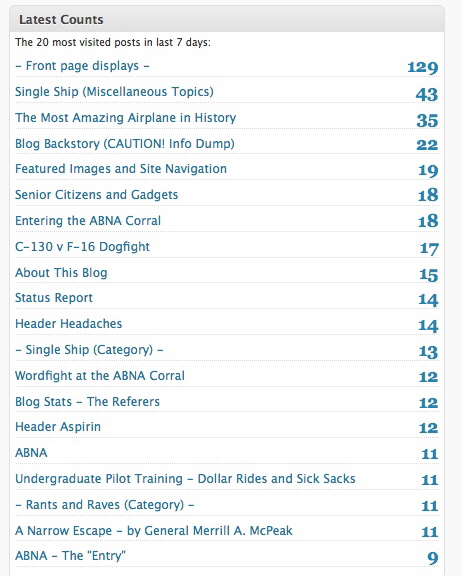 There’s a saying that you can prove anything with statistics by manipulating assumptions. This effort doesn’t fall prey to that temptation for two reasons: 1) I’m not trying to prove anything, and 2) the Count per Day plugin does its thing with no input from me.

My motivation for installing the counter has always been nothing more than curiosity about the number of visitors to the website and what they read.

Another purpose of statistics is analysis, most often with the objective of using the data as the basis for taking action of some sort. In my case, maybe that would involve trying to determine if one of my logbooks and the content therein draws more interest than others. If I wanted to “cater” to the statistically displayed interest, I might decide to write more posts for that logbook and “feed” visitor appetite, if you will.

My sister-in-law Patricia Evans noticed a couple of interesting things on her blogspot: visitors from all over the world find it, and they seem less interested in posts she describes as “ramblings” on writing than those on other subjects.

For this site, the table “Visitors per post” on the right side of the second screen grab shows the top 20 posts in terms of visitor count. As has been true from the first day of installing the counter, one of my earliest posts is the clear winner over its closest contender by almost double, and both of the top two posts deal with the world of blogging.

This fact continues to baffle me. And while I might be tempted to conclude that the interest as indicated by visitor count has to do with subject matter, the truth may be quite different. In spite of no attempt on my part to include any particular key words, maybe they’re in there somewhere, and the link to this post tends to show up near the top of searches that don’t begin with looking for anything to do with me or this site.

The reality probably is nothing more than a matter of pure chance. Or the numbers may be skewed by something in the post that makes it a high-visibility target of the spam and junk crowd. But even with that possibility as likely as any other, this adventure in blogging continues to fascinate me. And if you’ve gotten this far, I really appreciate your interest and invite you to stick around and dig deeper into the stack of posts (158 and counting) for something you might find worth your time.