Undergraduate Pilot Training began with intensive academics prior to any flying.

None of us had ever flown the T-37, and the era of being handed a flight manual with instructions to “Read this tonight and be ready for a dawn takeoff” were long gone. We spent many hours learning about the airplane and its systems, all of which were far more complicated than anything we’d seen so far.

Classroom instruction also covered a myriad of other subjects, including meteorology. We had private pilot’s licenses, so we weren’t novices when it came to understanding weather patterns and how dangerous conditions develop in the atmosphere. That said, we hadn’t any experience flying in West Texas.

One of the first lectures involved the topic of wind. That seemed a bit strange at the time, considering all of the other weather hazards pilots had to deal with, but did I mention that this was West Texas? 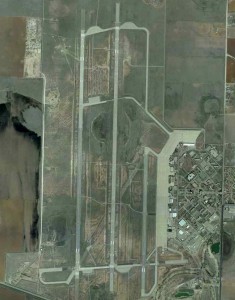 Since proximity of the Gulf of Mexico creates a predominant southerly wind throughout the state, most Texas airports have a primary runway oriented roughly north-south. Reese AFB was no exception, and originally it had what were called “crosswind” runways. But in 1964 these were no longer in use. All takeoffs and landings had to be made on a north or south heading. Unfortunately, the wind didn’t always cooperate, and it often seemed downright malicious.

The first mention of wind came during a lecture on survival gear and being prepared for the unexpected. What if we had to eject and spend a night out in the open before being rescued? We had been issued two flight jackets, and the instructor recommended wearing the heavyweight version during the winter months regardless of forecast temperatures during at the time of our scheduled flights.

“Now, boys, y’all need to remember this is West Texas. The weather can change faster’n you can blink. And when the only thang ‘tween you and the North Pole is a three-strand bob wahr fence, and two o’ them strands are broken, take it from me. You can freeze yore buns off mighty durn quick.”

A strong north wind posed no problems for takeoffs and landings, but Reese didn’t earn a reputation for challenging crosswinds for nothing. A westerly flow at the surface could develop very quickly and exceed the maximum allowable landing crosswind component for student pilots. It also could bring sand. Lots of sand. The joke was that if you felt a west wind at Reese, you could take a sniff and smell New Mexico.

The potential danger of a sudden change in the weather catching a bunch of airplanes airborne with solo student pilots dictated a well-oiled recall plan. “All solo students at Reese return to the pattern immediately and land” broadcast over “guard” channel would bring the fledglings home before crosswinds and lowered visibility worsened to the point of jeopardizing safety.

Landing in a strong crosswind takes special techniques and lots of practice. Prior to the terminal portion just prior to touchdown, pilots most commonly use the “crab method” of aligning the airplane with the runway. The pilot turns the airplane into the wind at an angle to the runway heading. Once any drift due to the wind is canceled, the pilot levels the wings so the flight path of the airplane continues in a straight line toward the touchdown point.

But you can’t touchdown in that condition without creating excessive side loads on the landing gear. This requires transitioning to the “wing low” method of canceling the drift for the landing: simultaneously add rudder to yaw the nose of the airplane to point at the runway and bank in the opposite direction into the wind. This is called “cross control” because it uses opposite rudder and aileron to maintain the desired flight path. Touchdown occurs in a bank on one main gear before lowering the opposite wheel to the runway.

Reese students got to practice crosswind landings a lot, which gave rise to another joke: “You can always identify a pilot trained at Reese because no matter which way the wind is blowing, his west wing will always be low.”

That morphed into another joke: “There’s that Chinese pilot from Reese, Won Wing Wo.”

I don’t know if my training at Reese had anything to do with it, but I have always used three strict criteria for self-evaluating my crosswind landings: touchdown at the desired point on the runway, with the longitudinal axis (nose to tail) aligned with runway heading, and on the center stripe.

About forty years later, after landing a Citation on a relatively short runway in strong, gusty crosswinds, I climbed out of the cockpit to open the main cabin door and noticed that none of the passengers had yet unbuckled their seat belts. Normally I have to get out of the way in a hurry or be trampled.

The owner of the jet knew all about crosswind landings because he had once asked me to explain them. He was trying to stifle a smile as he said, “Tosh, our passengers were wondering why you landed on only one wheel.”

The devil made me reply, “Because I noticed on preflight that the other tire was a little more used and I wanted to even out the wear.”

I wish I could have kept a straight face a bit longer . . .