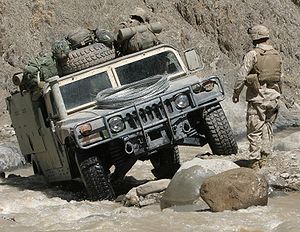 Remember when Governor Arnold Schwarzenegger supposedly precipitated one of the most outrageous failures in the history of the automobile industry?

As the story goes, he loved the Humvee and suggested that General Motors should make a civilian version. I mean, why not? The Jeep rose from military-vehicle roots, and how many of those have been sold over the years?

Blissfully ignorant of what the future held in store, GM produced gas-guzzling behemoths capable of traveling off-road and crushing almost any obstacle in their path so that soccer moms and dads could take the kids to school, go to work, and out for a night on the town.

And for that latter activity, GM engineers realized how popular the vehicle would be as a status symbol. They included an instruction manual written especially for valet parking attendants. You know, how to drive a tank in confined spaces without flattening a Lexus. One particularly important caution was written in red: “DO NOT TOUCH THE CANNON BUTTON.”

Enter the follow-on to this madness. From an article by W.J. Hennigan in the Los Angeles Times (edited for brevity):

“With its armored doors and bulletproof windows, the burly Humvee has been a stalwart ground transport for the U.S. military. But now the Pentagon thinks the hulking vehicle should also be able to fly. On Tuesday, Pratt & Whitney’s Rocketdyne division in Canoga Park announced it had been awarded $1 million to design a propulsion system for a flying Humvee.

“Don’t scoff — there is good reason for an airborne truck. With the proliferation of improvised explosive devices, or IEDs, on the ground, a hovering Humvee would be an ideal way to keep soldiers out of harm’s way. Dubbed the Transformer, the vehicle — at least an artist’s rendering of it — looks like a toy commando truck out of a ‘G.I. Joe’ cartoon. But according to the Pentagon’s technical specs, it would ‘combine the advantages of ground vehicles and helicopters into a single vehicle equipped with flexibility of movement.’ 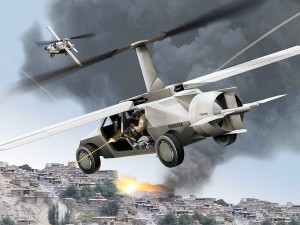 “The Transformer would have folding wings that pop out from the side of the vehicle and helicopter-like rotor blades attached to either the roof or the wings, depending on which design the Pentagon picks. Also, it would be robotic, so there would be no pilot or driver behind the wheel. The hybrid craft is being spearheaded by the Pentagon’s famed Defense Advanced Research Projects Agency, or DARPA, which has been behind projects that have either turned out to be revolutionary, such as the Internet and stealth technology, or just boneheaded, like developing telepathic spies and jungle-tromping robotic elephants.”

According to the article, the flying Humvee should be able to haul 1,000 pounds while traveling a distance of 287 miles on a tankful of fuel. That’s an especially tall task considering that the ground-only version gets 14 miles per gallon at best. But just think of the potential civilian market.

Today, you pull out of your driveway on any typical weekday morning and within a minute or two resign yourself to the fact that you’ll be idling your way in gridlock to wherever it is you need to go. Might as well make good use of the time. Pull out your trusty wired-to-the-world device and chit-chat, check your portfolio, play a video game, and engage in text-talk while other drivers are trying to avoid the results of your inattention. Oh, well, that’s what modern life has become, so we all just have to deal with it.

But wait! You, too, can have the civilian version of the Transformer! It’ll have leather seats, wood dashboard trim, a state-of-the-art sound and video entertainment system, fold-down rear seats, and cup holders in every conceivable location. Just in case you’re wondering, the M-60 machine guns will not an option. That would create the potential for road rage on steroids.

So, what will they call it? The original Humvee became the Hummer. I guess that means the Transformer will become the Transformee. Catchy.

But back to my point. When you absolutely can’t stand the creeping any longer, you’ll fire up the jet engine, extend the wing/rotor assembly, and lift yourself out of gridlock into the freedom of the sky. How cool is that?

Until all your friends an neighbors get one, that is. Then you’ll be right back where you began, only this time in a hover waiting in line to set down on the Tranformee landing pad at your destination.

And we call ourselves intelligent life . . .