Williams was in the back emptying the extra gas cans into the gas tank as fast as we had burned off enough fuel. He then punched holes in the tins and pushed then out of the hatch against the wind. Some of the fellows ate sandwiches and other goodies that the Navy had put aboard for us. I wasn’t hungry.

I held onto the controls with a firm grip as we raced along westward just fifty feet above the cold rolling ocean, as low as I dared to fly. Being so close to the choppy waves gave us a true sense of speed.  Occasionally our windshield was even sprayed with a little saltwater. It was an exhilarating feeling, and I felt as though the will and spirit of our whole country was pushing us along.  I didn’t feel too scared, just  anxious. There was a lot riding on this thing, and on me.

As we began to near land, we saw an occasional ship here and there. None of them close enough to be threatening, but just the same, we were feeling more edgy. Then at 1330 we sighted land, the Eastern shore of Honshu. With Williams now on his guns in the top turret and Campbell on the nose gun, we  came ashore still flying low as possible, and were surprised to see people on the ground waving to us as we flew in over the farmland. It was beautiful countryside.

Campbell, our navigator, said, “Mac, I think we’re going to be about sixty miles too  far north. I’m not positive, but pretty sure.”

I decided that he was absolutely right and turned left ninety degrees, went back just offshore and followed the coast line south. When I thought we had gone far enough, I climbed up to two thousand feet to find out where we were.

We started getting fire from anti-aircraft guns. Then we spotted Tokyo Bay, turned west and put our nose down diving toward the water. Once over the bay, I could  see our target, Yokosuka Naval Base. Off to the right there was already smoke visible over Tokyo. Coming in low over the water, I increased speed to 200 mph and told everyone, “Get ready!” When we  were close enough, I pulled up to 1300 feet and opened  the bomb doors. There were furious black bursts of anti-aircraft fire all around us, but I flew straight on through them, spotting our target, the torpedo works and the dry-docks. I saw a big ship in the dry-dock just as we flew over it.

Those flak bursts were really getting close and bouncing us around, when I heard Bourgeois shout, “Bombs away!” I couldn’t see it, but Williams had a bird’s eye view from the back and he shouted  jubilantly, “We got an aircraft carrier! The whole dock is burning!” I started turning to the south and strained my neck to look back and at that moment saw a large crane blow up and start falling over!

Take that! There was loud yelling and clapping each other on the  back. We were all just ecstatic, and still alive! But there wasn’t much time to celebrate. We had to get out of here and fast!

When we were some thirty miles out to sea, we took one last look back at our target and could still see huge billows of black smoke. Up until now, we had been flying for Uncle Sam, but now we were flying for ourselves.

We flew south over open ocean, parallel to the Japanese coast all afternoon. We saw a large submarine apparently at rest, and then in another fifteen miles, we spotted three large enemy cruisers headed for Japan. There were no more bombs, so we just let them be and kept on going. By late afternoon, Campbell calculated that it was time to  turn and make for China. 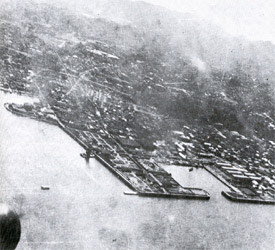 Across the East China Sea, the weather ahead of us looked bad and overcast. Up until now we had not had time to think much about our gasoline supply, but the math did not look good. We just didn’t have enough fuel to make it!   Each man took turns cranking the little hand radio to see if we could pick up the promised radio beacon. There was no signal. This was not good.

The weather turned bad and it was getting dark, so we climbed up. I was now flying on instruments, through a dark misty rain. Just when it  really looked hopeless of reaching land, we suddenly picked up a strong tailwind. It was an answer to a prayer. Maybe, just maybe, we can make it!

In total darkness at 2100 hours, we figured that we must be crossing the coastline, so I began a slow, slow climb to be sure of not hitting any high ground or anything. I conserved as much fuel as I could, getting real low on gas now. The guys were still cranking on the radio, but after five hours of hand cranking with aching hands and backs, there was utter silence. No radio beacon!

Then the red light started blinking, indicating only twenty minutes of fuel left. We started getting ready to bail out. I turned the controls over to Knobby and crawled to the back of the plane, past the now-collapsed rubber gas tank. I dumped everything out of my bag and repacked just what I really needed, my .45 pistol, ammunition, flashlight, compass, medical kit, fishing tackle, chocolate bars, peanut  butter and crackers. I told Williams to come forward with me so we could all be together for this. There was no other choice. I had to get us as far west as  possible, and then we had to jump. 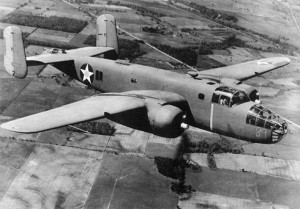 At 2230 we were up to 6500 feet. We were over land  but still above the Japanese Army in China. We couldn’t  see the stars, so Campbell couldn’t get a good fix on our position. We were flying on fumes now and I didn’t want to run out of gas before we were ready to go.

Each man filled his canteen, put on his Mae West life jacket and parachute, and filled his bag with those “C” rations from the Presidio. I put her on auto-pilot  and we all gathered in the navigator’s compartment around the hatch in the floor. We checked each other’s  parachute harness. Everyone was scared, without a  doubt.

Please visit again soon for the conclusion of Doolittle Raid.