Airport Security Out of Control

On December 7, 1987, a Pacific Southwest Airlines BAe146-200 crashed into the Pacific Ocean near San Luis Obispo, CA. All five crew members and 37 passengers were killed. The cause of the accident was determined to be the unlawful death by gunshot of both pilots at the hands of a uniformed but recently fired airline employee who boarded the aircraft with a pistol. One of the passengers was the employee’s former manager. How did the revenge killer get on board the airplane with a weapon? The answer that time was, “No problem.”

When I began my ten-year employment as an airline pilot in 1987, crew members routinely entered restricted areas through unguarded airline personnel doors into the first floor of terminal buildings. The doors did have cypher locks, so you had to know the “secret” numerical code. But for the convenience of crews not based at the airport, all we had to do was look around the door and voila, somewhere on the jamb or the wall, we’d find it written: 2-4-1-3, for example.

After visiting the crew room and completing flight preparations, we typically entered the airport concourse on the second level and mingled with passengers on the way to our departure gate. But since we were in uniform and badged, we could bypass security checkpoints without screening of any kind.

Following this crash, that changed. You might be thinking that the new procedures would be designed to prevent anything like this tragedy from happening again. You’d be wrong.  At many, if not all, of the airports I visited regularly, crew members could still board an airplane without them or their bags being screened. 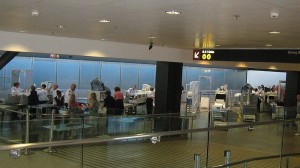 So why didn’t the commercial air travel system in the United States implement effective measures? Pick your excuse, but it probably had to do with the sheer number of places at which access points would have to be secured to prevent un-screened entry. That would be too much trouble. So the “fix” was to ensure that any crew members within sight of passengers passed through checkpoints. The objective? Give passengers a “warm fuzzy” so they wouldn’t be afraid to fly on commercial airliners. It’s a tactic as old a government: spin public perception to influence behavior of the masses.

In a previous blog I wrote about the pitiful security measures in place at Boston’s Logan International Airport that allowed the 9/11 hijackers to board four airplanes and change America forever. Since that time, screening procedures have been implemented to prevent a recurrence while wannabe terrorists have added to the inconvenience of air travel by causing us to remove our shoes, submit to full-body X-ray scans, and in the latest personal intrusion, experience the joy of a hand’s-on frisking.

Consider a recent incident, in which a pilot for ExpressJet Airlines refused to subject himself to a full-body scan at his home base of Memphis. The pilot likens the scan, a technology that reveals a graphic depiction of a person’s body beneath their clothing, to “virtual strip searching.” He also declined the alternative of being frisked. When discussion between the pilot and TSA screeners became a stalemate, he attempted to leave and was detained for questioning.

The pilot says the TSA contacted his employer and he is now unsure of his future at ExpressJet. His account of the incident, under the title, “well, today was the day,” has become a topic of debate in online pilot forums. Whatever your opinion, his actions evolved over time from earlier statements expressing his concerns about security measures and were apparently not intended as a conclusive act but rather to initiate further action.

The pilot writes, “This is not a left or right, red or blue state issue. The very bedrock of our way of life in this country is under attack from within. Please don’t let it be taken from us without a fight.” He concludes his account with the words, “Malo Periculosam Libertatem Quam Quietum Servitium.” That translates as, “I prefer liberty with danger to peace with slavery.”

In a previous blog under the title “The Quagmire of Disproportionate Response,” I offered the opinion that the aftermath of 9/11 has threatened the long-term survivability of this country far more than the attack itself. And I submit that to treat badged, uniformed airline cockpit crew members, who can be authorized to carry weapons in the cockpit, as potential terrorists is a government knee-jerk reaction in the extreme. If pilots can legally carry a weapon into the cockpit, why would one of them find it necessary to conceal some other dangerous weapon or substance on their person?

You may have heard the joke about an elderly lady removed from an airliner shortly after boarding because she got knitting needles out of a carry-on bag. Airline personnel explained the incident by saying they were afraid “she would knit another Afghan.” That might elicit a chuckle, but here’s something that shouldn’t.

A few years ago, a WWII Medal of Honor recipient was traveling to a speaking engagement. TSA screeners detained him because the medal tripped the alarm, and due to the ensuing delay, he missed his flight. Some people may believe that this sort of mistake is nothing more than the price we pay to remain safe. I’m of the opposite opinion, that common sense and good judgment must prevail. I have no problem with any individual TSA screener, but if the system can’t recognize the difference between a true American hero or an airline pilot simply going to work and a terrorist, the system is out of control.

And I agree with the ExpressJet pilot that we, the people of this great nation, must not ignore the seeds of tyranny. To let them germinate and grow is to forfeit our freedom piece by piece.