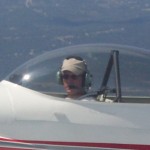 The following comments relate to information from AVweb and the NTSB preliminary accident report on this accident.

The Premier 1 did not touchdown on the runway and initiate a go-around due to conflict with another airplane on landing rollout as suggested by a second-hand eyewitness report. The pilot asked the tower controller if he was “going to be okay with this” and the controller answers, “Affirmative.” From that moment until impact, no radio communication occurs between the tower and the pilot.

Previously in this thread, I presented a likely scenario in which the pilot overshot the centerline of the landing runway and unsuccessfully tried to “salvage” the approach. According to the most recent information, that is exactly what occurred.

In an interview with a car-racing publication, the pilot “appears” (the words of AVweb) to blame air traffic controllers for events that led to the crash landing. “The reality of it–on a trip arrival into Oshkosh, Wisconsin, I was put into conflict with the flight plan of another airplane close to the ground, and I was unable to address the conflict and keep the airplane flying. I ground looped the airplane.”

I have a number of issues here. The pilot’s statement doesn’t blame the tower controller. It simply states a fact, that the instructions put him conflict. Then he says he couldn’t resolve the conflict, which “appears” to me that he accepted responsibility for failure to prevent the accident. His comment that he “ground-looped” the airplane is erroneous, because he did nothing of the sort.

As pilot-in-command (PIC) of the airplane, he is the sole person ultimately responsible for what happens. There is no “passing of the buck” to someone else. It may or may not be true that the tower instructions put him too close to the airplane ahead of him on the runway. One possibility is that the tower instructions were reasonable based upon what the controller saw when he issued them, but he didn’t anticipate that the pilot would overshoot the final approach and have to correct his flight path at low altitude, close-in to the runway. This sort of maneuvering often causes an airplane to land “long” rather that  in the desired touchdown zone. Controllers don’t have a crystal ball at their consoles to predict what’s going to happen next. 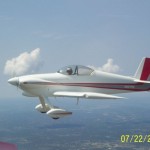 In the final analysis, however, none of that matters. The PIC is responsible for assessing everything that happens and making safe decisions. If the PIC receives an instruction that jeopardizes safety, he is obligated to reject the instruction, inform the tower what he’s doing instead, and sort it out after landing.

This accident ultimately was caused by pilot error. He flew the airplane into a condition from which safe recovery was impossible. The moment he had any doubt as to his ability to land safely, he should have rejected the landing attempt with sufficient airspeed and altitude to prevent uncontrolled contact with the ground.