Pilot Error in Fact and Fiction — The Presentation in Brief

If the title of this post is black, or you are viewing the fighter pilot header, click on the title to view the featured image header and continue reading. 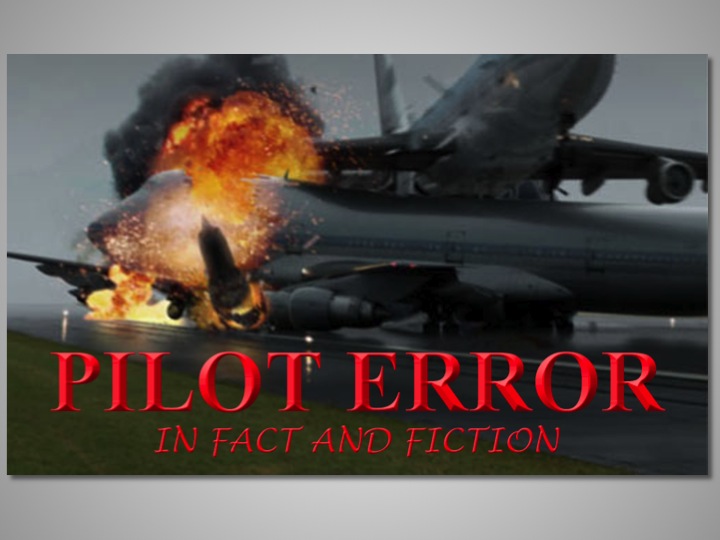 As documented in previous posts in the Pilot Error “logbook,” I’ve given the presentation titled, “Pilot Error in Fact and Fiction” to a variety of groups since the first invitation to be a guest speaker for the UT LAMP (Leaning Activities for Mature People) Lecture and Seminar Program as a part of the Osher Lifelong Learning Institute at the Thompson Conference Center on the UT-Austin campus.

Other speaking venues have included:

THE OVERVIEW: “PILOT ERROR IN FACT AND FICTION”

Although air travel is by far the safest mode of transportation over long distances, pilot error is the most common cause or contributing factor in air crashes. Tosh covers in detail the critical links in the chain of events relating to four high-profile aviation accidents that define the all-too-common role of human performance in determining the final outcomes. His presentation will focus primarily on the facts of pilot error and finish with a short description of how he has used his personal experience and interest in writing to author a series of mystery novels in which pilot error serves as a smokescreen for airborne murder.

Lt. Col. McIntosh entered the United States Air Force in 1964 and served on active duty as a pilot for twenty years, five months, four days, twelve hours, and thirty-seven seconds, but who’s counting? He never had a desk job that didn’t include active flying, all of which after pilot training was in fighters, and of that, the majority in the F-4 Phantom, including two combat tours in a hot war and the rest in constant readiness if a cold war decided to heat up.

Tosh retired from active duty in 1985 not yet ready to turn in his g-suit. Every day since he has missed the unique combination of service to country and the bond of commitment to a team effort in which each fighter pilot must constantly perform to the best of his ability with no exceptions. Fail your wingman or leader and an already dangerous profession turns deadly.

After a series of false-start second careers in Austin, Texas as a flight instructor, landscaper, and financial planner, he flew airliners for ten years before monumental boredom finally drove him away and he began flying corporate jets. His professional flying landed for the last time in 2007.

Tosh is also a writer. Although he’s been putting pen to paper for much less time than he’s been a flyer, these two dominating interests in his life dovetail seamlessly into a synergistic union. His goal is to share with readers his deeply ingrained love of aviation.

With the exception of a short detour in the Air Defense Command flying the F-102 Delta Dart and the F-101 Voodoo, Tosh was privileged to call the F-4 Phantom II cockpit his office for most of his Air Force career, which included:

After leaving the Air Force, he flew DC-9s for ten years with an airline, and spent another decade flying corporate and private business jets.

Tosh’s professional flying career ended in February, 2007 when his employer sold a really nice Citation III business jet and put him on the street with a “Will Fly For Food” sign at a time when flying jobs were few and far between.