A Tribute to Bill Mauldin – by Bob Greene

One of my grounding, fundamental goals in maintaining this blog is to honor in any way I can the memories of those who, as members of the greatest generation, answered the call for help in the defense of freedom against the abomination of the Axis Powers.

On May 7, 2010, Bob Greene, CNN Contributor, published this tribute to a man whose name is synonymous with the concept of larger than life to any combat veteran of WWII, but I don’t think he will mind my taking the liberty of including it here. The text appears with only minor editing to remove extra spaces and a few formatting problems in the version I received. Here it is:

When you are in Oklahoma City, go to the 45th Infantry Division Museum located on N E 36th. There is a lot of Bill Mauldin art work there. 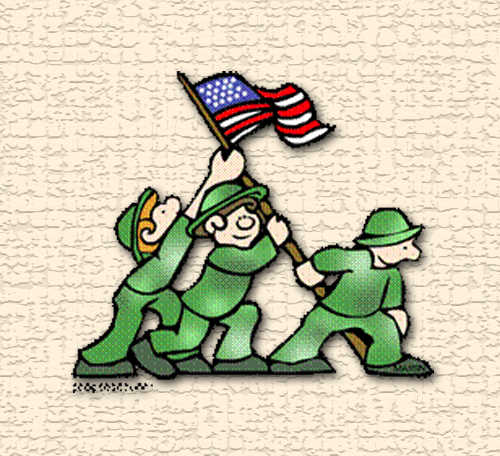 Get out your history books and open them to the chapter on World War II. Today’s lesson will cover a little known but very important hero of whom very little was ever really known. Here is another important piece of lost U.S. history, which is a true example of our American Spirit.

Makes ya proud to put this stamp on your envelopes . . . 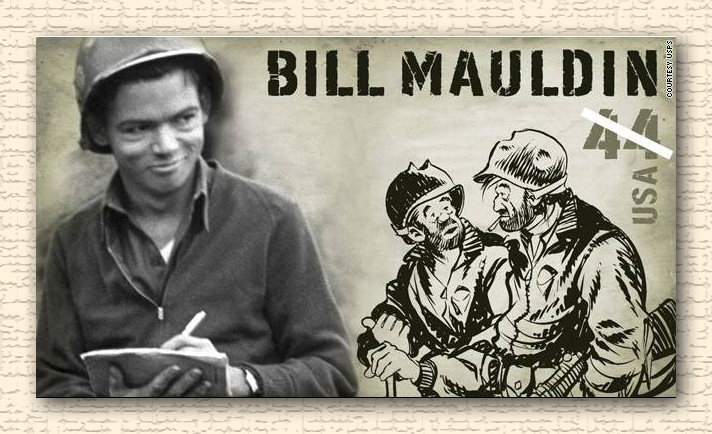 The post office gets a lot of criticism. Always has, always will. And with the renewed push to get rid of Saturday mail delivery, expect complaints to intensify. But the United States Postal Service deserves a standing ovation for something that happened last month: Bill Mauldin got his own postage stamp.

Mauldin died at age 81 in the early days of 2003. The end of his life had been rugged. He had been scalded in a bathtub, which led to terrible injuries and infections; Alzheimer’s disease was inflicting its cruelties. Unable to care for himself after the scalding, he became a resident of a California nursing home, his health and spirits in rapid decline. 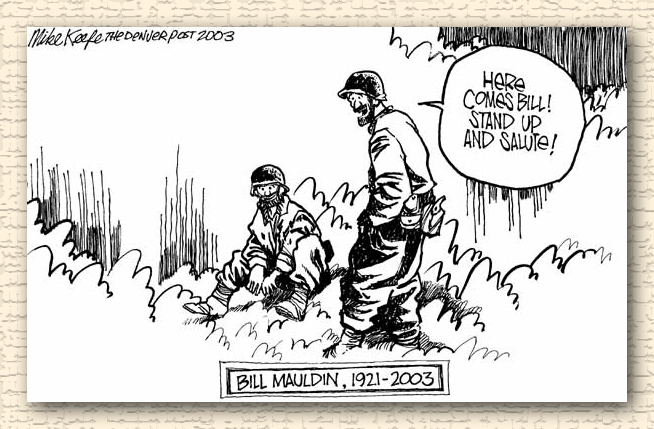 He  was not forgotten, though. Mauldin, and his work, meant so much to the millions of Americans who fought in World War II, and to those who had waited for them to come home. He was a kid cartoonist for Stars and Stripes, the military newspaper. Mauldin’s drawings of his muddy, exhausted, whisker-stubbled infantrymen Willie and Joe were the voice of truth about what it was like on the front lines. 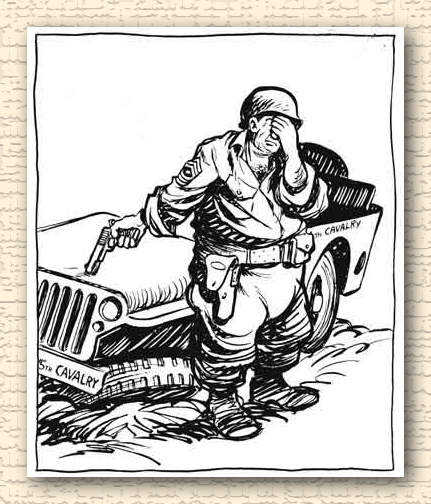 Mauldin was an enlisted man just like the soldiers he drew for; his gripes were their  gripes, his laughs their laughs, his heartaches their heartaches. He was one of them. They loved him. 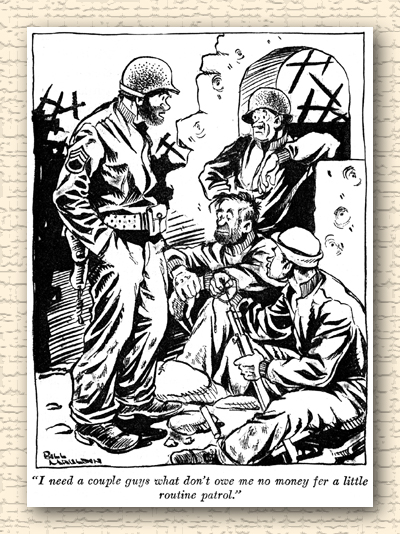 He never held back. Sometimes, when his cartoons cut too close for comfort, superior officers tried to tone him down. In one memorable incident, he enraged Gen. George S. Patton, who informed Mauldin he wanted the pointed cartoons celebrating the fighting men and lampooning the high-ranking officers to stop. Now! 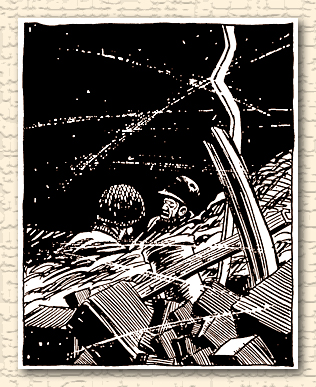 “I’m beginning to feel like a fugitive from the “law of  averages.”

The  news passed from soldier to soldier. How was Sgt. Bill Mauldin going to stand up to Gen. Patton?  It seemed impossible. 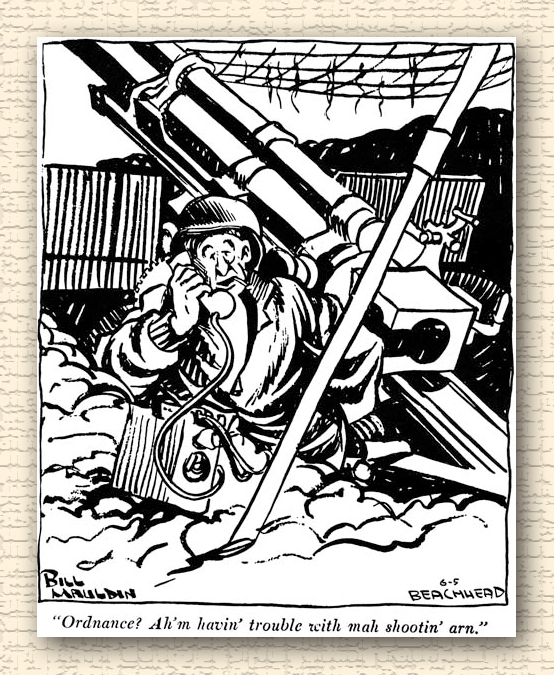 Not quite. Mauldin, it turned out, had an ardent fan: Five-star Gen. Dwight  D. Eisenhower, Supreme Commander of the Allied Forces in Europe. Ike put out  the word: Mauldin draws what Mauldin wants. Mauldin won. Patton  lost. 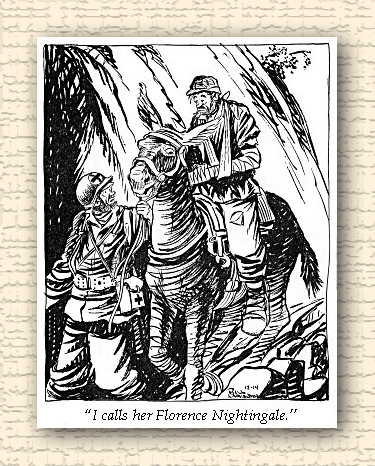 If, in your line of work, you’ve ever considered yourself a young hotshot, or if you’ve ever known anyone who has felt that way about him or herself, the story of Mauldin’s young manhood will humble you. Here is what, by the  time he was 23 years old, Mauldin accomplished:

“By the way, wot wuz them changes you wuz gonna make when you took over last month, sir?”

He won the Pulitzer Prize and was featured on the cover of Time magazine. His book “Up Front” was the No. 1 best-seller in the United States. 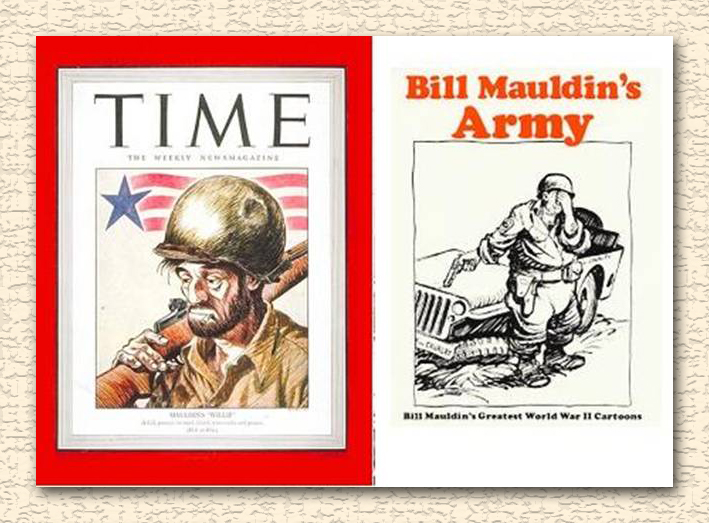 All of that at 23. Yet, when he returned to civilian life and grew older, he never lost that boyish Mauldin grin, never outgrew his excitement about doing his job, never big-shotted or high-hatted the people with whom he worked every  day. 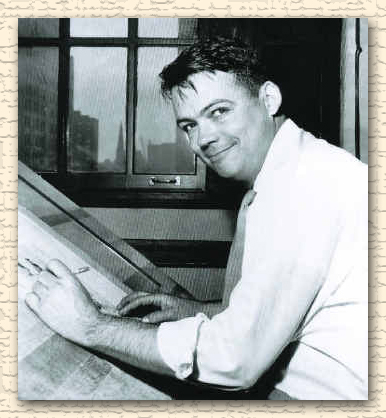 I was lucky enough to be one of them. Mauldin roamed the hallways of the Chicago Sun-Times in the late 1960s and early 1970s with no more officiousness or air of haughtiness than if he was a copyboy. That impish look on his face remained. 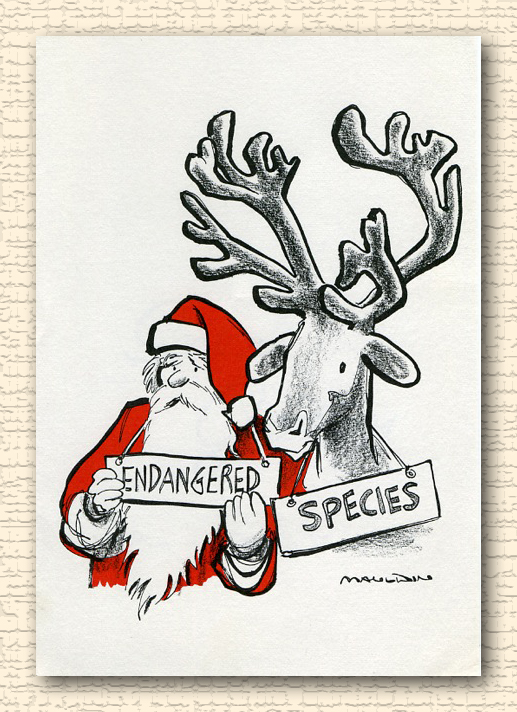 He had achieved so much. He won a second Pulitzer Prize, and he should have won a third for what may be the single greatest editorial cartoon in the history of the craft: his deadline rendering, on the day President John F. Kennedy was assassinated, of the statue at the Lincoln Memorial slumped in grief, its head cradled in its hands. But he never acted as if he was better than the people he met. He was still Mauldin, the enlisted  man. 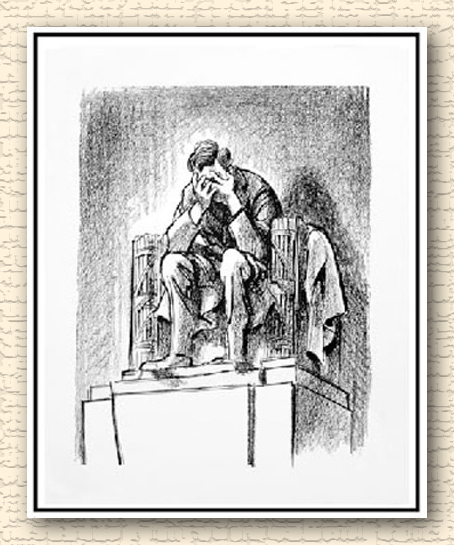 During  the late summer of 2002, as Mauldin lay in that California nursing home, some of the old World War II infantry guys caught wind of it. They didn’t want Mauldin to go out that way. They thought he should know he was still their hero. 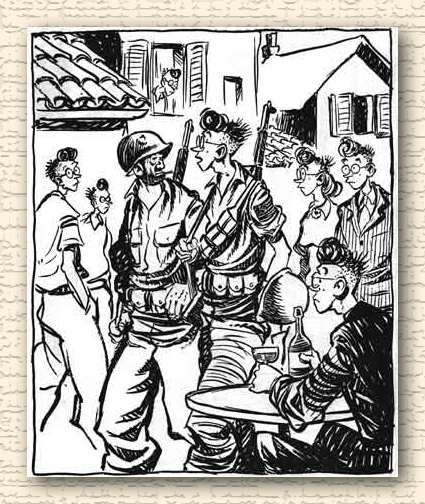 “This is the’ town my pappy told me about.”

Gordon Dillow, a columnist for the Orange County Register, put out the call in southern California for people in the area to send their best wishes to Mauldin. I joined Dillow in the effort, helping to spread the appeal nationally, so Bill would not feel so alone. Soon, more than 10,000 cards and letters had arrived at Mauldin’s bedside.

Better than that, old soldiers began to show up just to sit with Mauldin, to let him know that they were there for him, as he, so long ago, had been there for them. So many volunteered to visit Bill that there was a waiting list. Here is how Todd DePastino, in the first paragraph of his wonderful biography of Mauldin, described  it:

“Almost every day in the summer and fall of 2002 they came to Park Superior nursing home in Newport Beach, California, to honor Army Sergeant, Technician Third Grade, Bill Mauldin. They came bearing relics of their youth: medals, insignia, photographs, and carefully folded newspaper clippings. Some wore old garrison caps. Others arrived resplendent in uniforms over a half-century old. Almost all of them wept as they filed down the corridor like pilgrims fulfilling some long-neglected obligation.”

One of the veterans explained to me why it was so important: “You would have to be  part of a combat infantry unit to appreciate what moments of relief Bill gave us. You had to be reading a soaking wet Stars and Stripes in a water-filled foxhole and then see one of  his cartoons.” 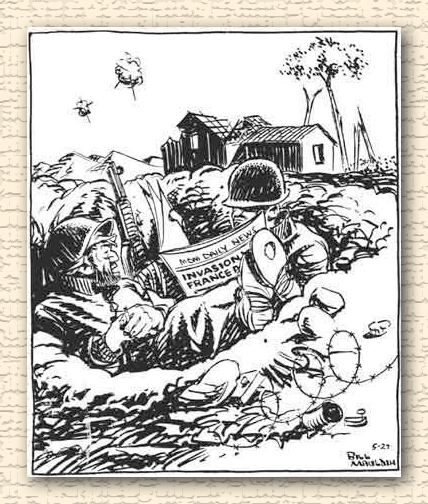 Mauldin is buried in Arlington National Cemetery. Last month, the kid cartoonist made it onto a first-class postage stamp. It’s an honor that most generals and admirals never receive. 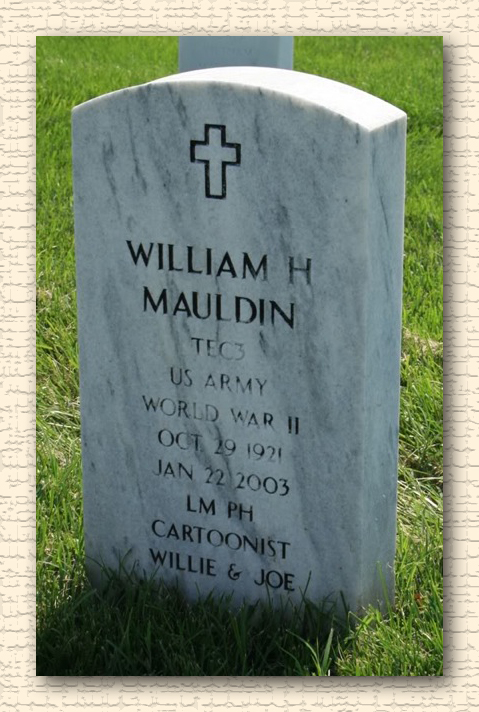 What  Mauldin would have loved most, I believe, is the sight of the two guys who keep him company on that stamp.

Take a look at it. 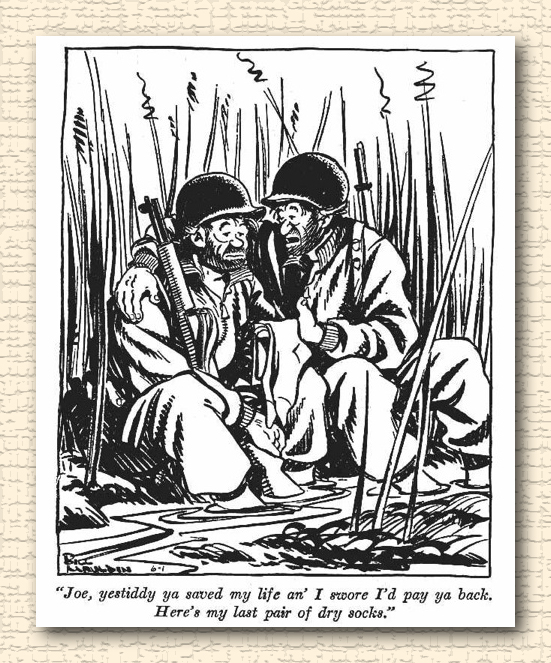 And there, to the side, drawing them and smiling that shy, quietly observant smile, is Mauldin himself. With his buddies, right where he belongs. Forever.

What a story, and a fitting tribute to a man and to a time that few of us can still remember. But I say to you youngsters, you must most seriously learn of and remember with respect the sufferings and sacrifices of your fathers, grandfathers and great grandfathers in times you cannot ever imagine today with all you have. But the only reason you are free to have it all is because of them.

I thought you would all enjoy reading and seeing this bit of American history!

2 Responses to A Tribute to Bill Mauldin – by Bob Greene