My good friend and fellow ex-fighter pilot Yago F. de Bobadilla, Maj. Gen. SAF (ret), has assembled a PowerPoint slide show as a companion to his original collection honoring the aviators and flying machines of World War II and the artists who commemorate specific events with exceptional skill and dedication to their craft.

Throughout the history of air warfare, combatants have struggled to achieve a tactical advantage and shift the balance of power in their direction by improving the aircraft and weaponry employed in the aerial battlefield.

Between the dawn of aviation and the outbreak of World War I in 1914, military leaders had disregarded the need for armed aircraft, believing them useful only for reconnaissance. Engineers in France and Germany, however, had been experimenting with methods to allow the pilot to fire a fuselage-mounted machine gun at an opponent without damaging his own propeller. Invention of the interrupter gear led to development of the gun synchronizer, which fostered the birth of aerial combat.

Based on extensive research of surviving German and French early WWI aviation records, the first victory using a synchronized machine-gun-equipped fighter most probably occurred on July 1, 1915 when the pilot of a German Fokker M.5K/MG forced down a French Morane-Saulnier Type L, which landed in French territory and could not be officially confirmed. Three days later, the same German pilot downed an unconfirmed Morane Parasol, and finally achieved the first officially confirmed victory on July 15, 1915 against another Morane Parasol.

Sole possession of a working gun synchronizer enabled Germany to dominate the skies over the Western Front in a period known as the Fokker Scourge. Although Germany was very careful to protect this advantage by forbidding its pilots from flying over enemy territory, the basic principles involved were common knowledge. By the middle of 1916, several Allied synchronizer gears were in use, and the aerial combat arena shifted to a more equal and far deadlier contest.

Throughout the history of aerial warfare, escalation has most often occurred in relatively small steps, such as extra machine guns, addition of a cannon (with exploding shells rather than bullets that rely on impact inertia alone to cause damage), or a supercharger for the engine to improve aircraft performance at high altitude.

And then along came the jet engine. During WWII, the British and the Americans both developed prototype jet-powered fighters, but Germany was the only country to employ one in combat. Imagine the shock and awe among Allied aviators when the ME-262 first appeared in defense of the crumbling Third Reich. Air warfare would never be the same.

And so, here is Part One of “Beautiful Aviation Art – The Jet Age” 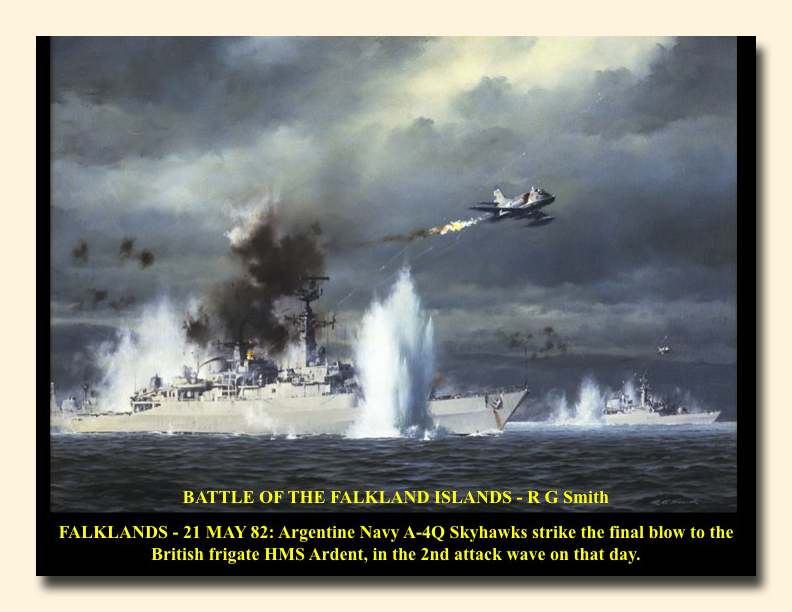 May 21, 1982. In the second-wave attack on the HMS Ardent, the Douglas A-4Qs of Lieutenants Benito Rotolo (3-A-306 in the foreground), Carlos Lecour (3-A-305, second) and Roberto Sylvester (3-A-301, last), one of Lecour’s bombs explodes inside a fuel tank and starts a fire that fatally wounds the frigate. 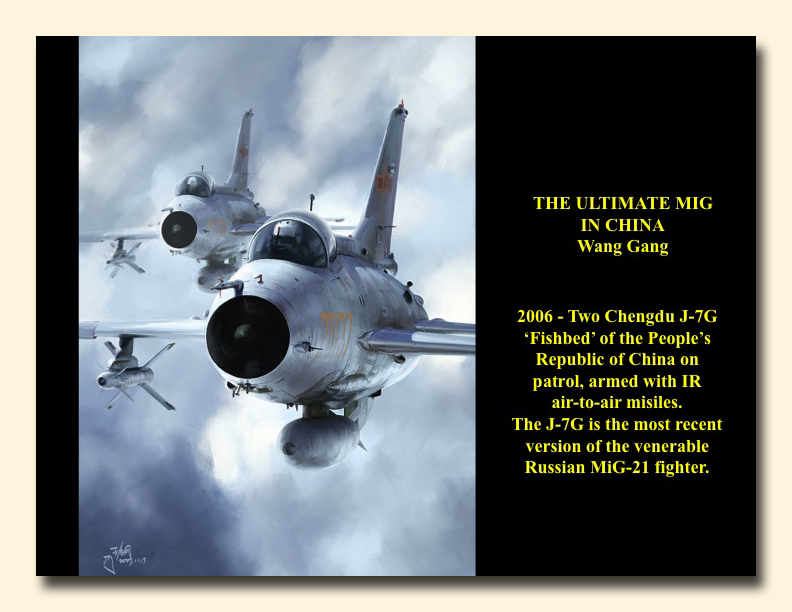 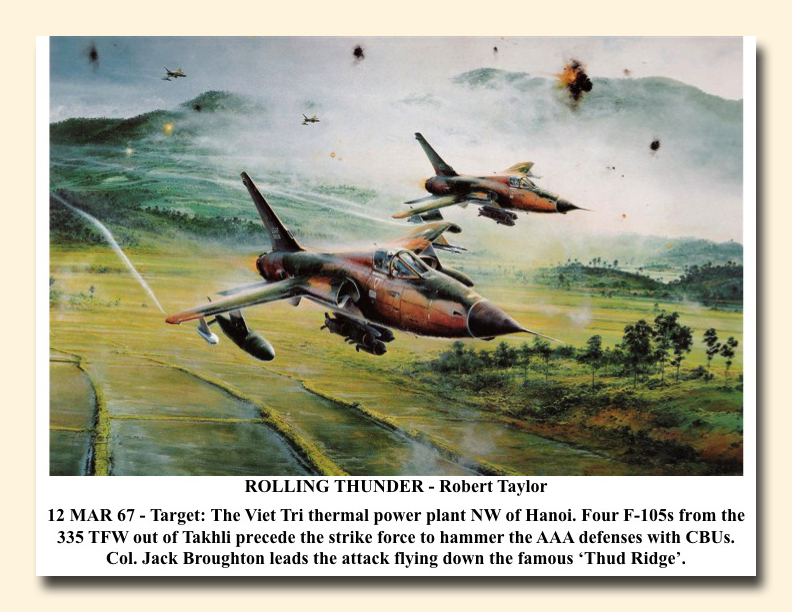 March 12, 1967. The target is the large thermal power plant at Viet Tri, on the Red River, a short distance to the northwest of Hanoi. Heavily defended by 100-mm and 85-mm gun positions, missile sites and the usual barrage of ground-fire encountered on any mission “downtown,” the task of the leading flight was to hammer the guns and clear the way for the closely following strike force to lay their bombs squarely on the power plant. They would all have to contend with the ever-present likelihood of MiG interception on the way out.

Leading the 335th TFW F-105 Thunderchiefs out of Takhli Royal Thai Air Base, Colonel Jack Broughton took the familiar route, approaching the target area flying down Thud Ridge. As the high ground fell away he pushed the flight of four ships down on the deck and, “going like hell,” Broughton swung the leading Thuds southwest, just enough to give those on the ground the impression they were headed somewhere south of Viet Tri.

Not quite abreast of the target, Broughton called the “pop-up,” and as the Thuds passed vertical they rolled inverted going over the top, attacking the guns from the opposite direction. Beneath them the big gun pits were lined up, their gunners confused by the maneuver, and before they could work out what was happening the F-105 pilots emptied their loads of CBUs into the middle of them.

Behind the Thuds came the strike force. With the air cleared of the usual flak barrage, the F-105’s unloaded their bombs right onto the thermal power plant. The facility was destroyed in one of the best-planned and executed raids of the war. 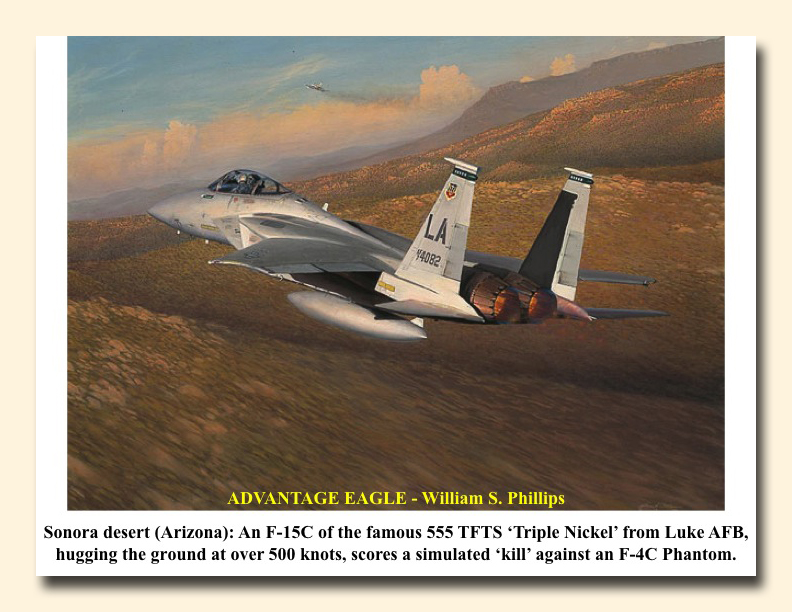 Luke Air Force Base, the 58th Tactical Fighter Training Wing and its famous “Triple Nickel” 555th Tactical Fighter Training Squadron, were the first recipients of the F-15. From the initial delivery on November 14, 1974, the eagle proved equal to its nickname. With its better than one-to-one thrust-to-weight ratio, the fighter can accelerate when flying vertically. One of its pilots said, “The Eagle can out-climb, out-maneuver, and out accelerate any fighter threat in existence or on the horizon.” The artist shows the F-15 screaming over the Sonora desert on a training mission.  In his words, “To impart a feeling of power and motion, the landscape in my painting is at a slight angle and the foreground is blurred as the Eagle roars by at about 500 knots.” 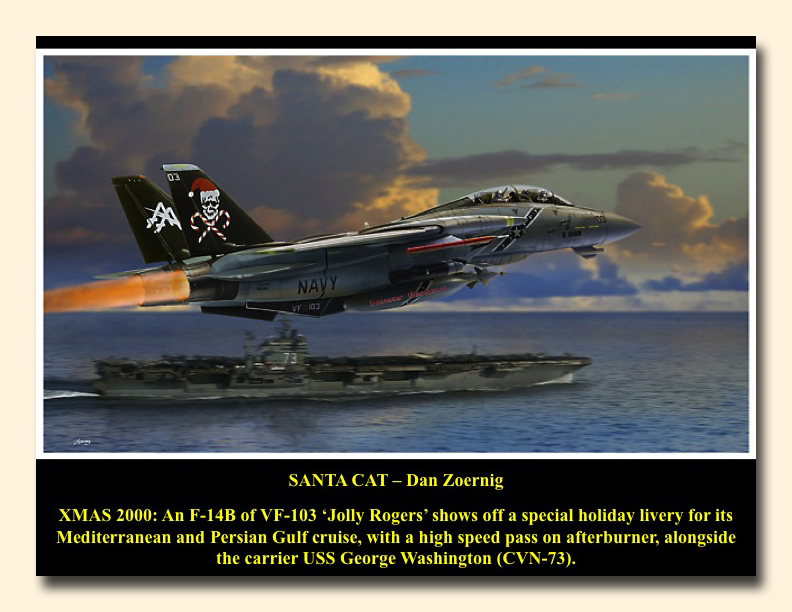 Christmas 2000. With a high speed pass on afterburner, F-14B no. 161435 of VF-103s Jolly Rogers shows off a special holiday livery for its Mediterranean and Persian Gulf cruise. With crossed candy canes and a Santa Claus cap replacing the traditional insignia, this Tomcat was one of a kind.

The nuclear powered aircraft carrier USS George Washington, CVN-73, can part the waters at over 30 knots and displaces 104,000 tons fully loaded. He is the sixth super carrier of the Nimitz class, and the fourth ship of the US Navy to be so named. Her home port is Norfolk, Virginia. 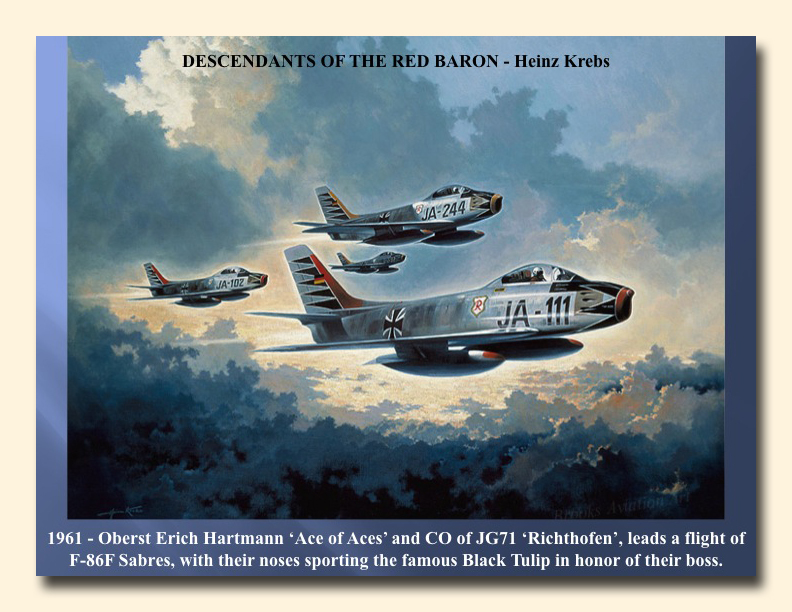 In 1961, the first fighter wing of the new German Federal Luftwaffe, led by the famous Ace of Aces Colonel Erich Hartmann, was named JG 71 Richthofen after another well-known German fighter ace, the Red Baron Manfred Freiherr von Richthofen. In this painting, Colonel Hartmann returns from a mission in his JA-111. The nose of Hartmann’s F-86 sports the black tulip, his personal emblem throughout World War II. This emblem is carried by all aircraft in his new fighter wing as a sign of loyalty to their boss. 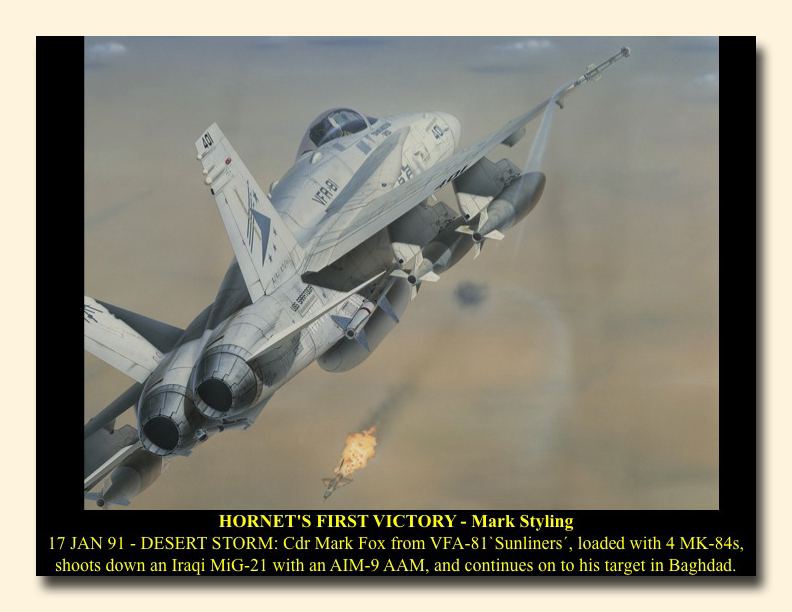 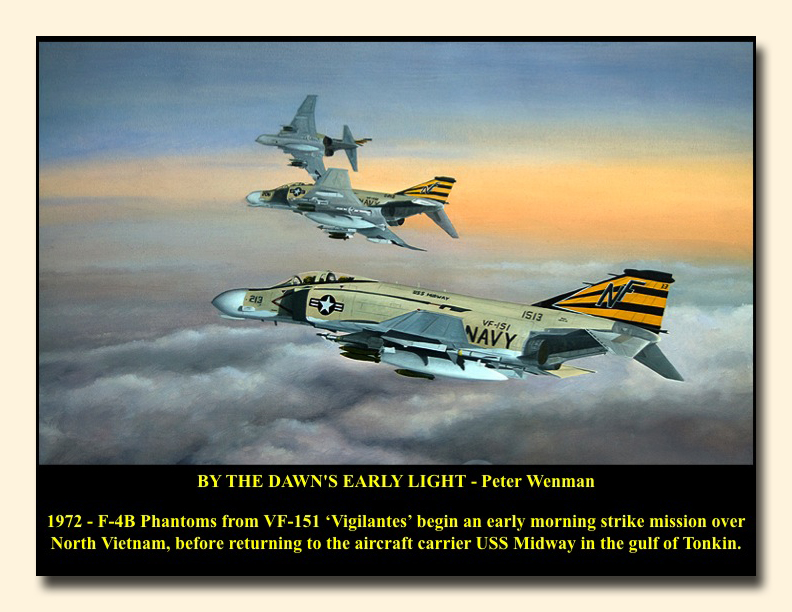 1972 – Three Phantom F-4B’s from VF-151 on an early morning mission over North Vietnam. NF 213 is piloted by John “Bedhog” Chesire, with RIO George “T.A.” Healey in the rear. NF 210 has Ted Triebel in the front seat and Dave Everett in the rear. Dave and Ted were shot down on August 27, 1972, on a photo escort mission over North Vietnam while flying 210, and spent the rest of the war as POW’s in the infamous Hanoi Hilton.

The series “Beautiful Aviation Art – The Jet Age” will continue with Part Two.