If the title of this post is black and/or you see the fighter-pilot header, click on the title to view the featured-image header and continue reading. You can click on any image for a larger view and use the back button on your browser to return here.

My original intent was to publish this series in six parts, but my good friend and fellow ex-fighter pilot Yago F. de Bobadilla, Maj. Gen. SAF (ret), sent me additional examples of aviation art that deserve to be included. Here they are: 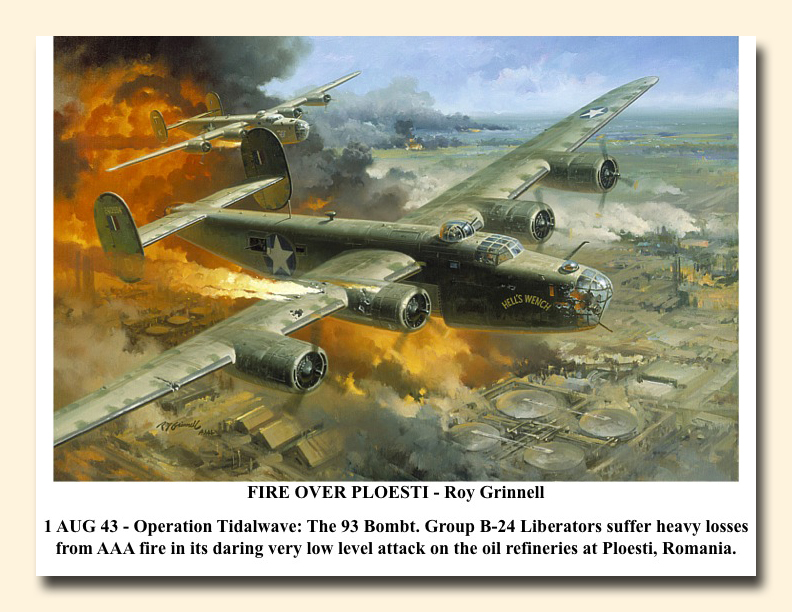 Ploesti, Romania, August 1, 1943–”Hell’s Wench,” a B-24 badly damaged by anti-aircraft artillery fire, led the 93rd Bombardment Group (Heavy) in its daring low level attack on the oil refineries at Ploesti, Romania which supplied two-thirds of Germany’s petroleum production at that stage of World War II. Lieutenant Colonel Addison E. Baker, an Ohio National Guardsman who commanded the 93rd, ignored the fact he was flying over terrain suitable for safe landing. He refused to break up the lead formation and led his group to the target, where he dropped his bombs with devastating effect. Then he left the formation, but his valiant attempts to gain enough altitude for the crew to escape by parachute failed and the aircraft crashed. For their gallant leadership and extraordinary flying skill, both Baker and his pilot, Major John L. Jerstad, posthumously received the Medal of Honor . The raid, nicknamed “Operation Tidalwave“, was especially costly, with 54 of the 177 bombers lost and 532 of the 1,726 personnel engaged listed as dead, missing or interned. 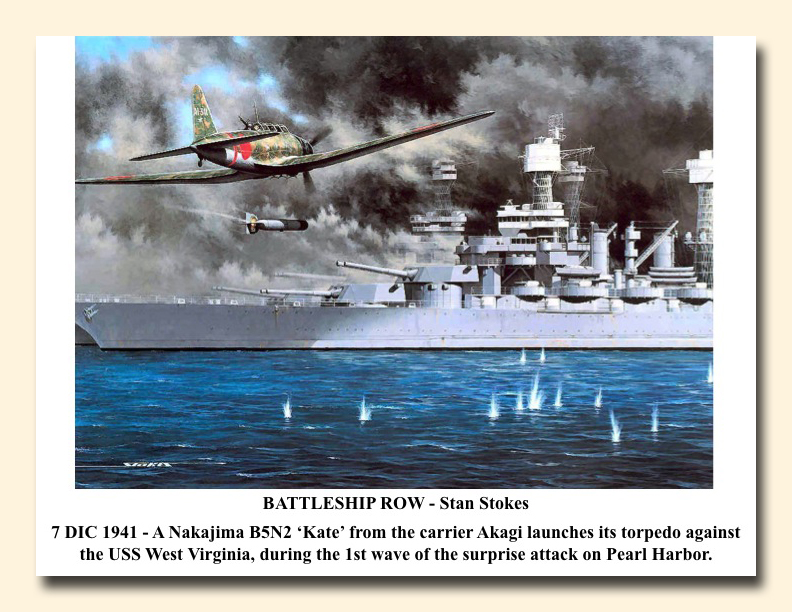 Torpedo aircraft from the Akagi, the Hiryu and the Kaga targeted battleship row during this first wave. As portrayed in the painting, a Japanese Nakajima B5N2 “Kate” from the Akagi launches its torpedo from very low altitude against the USS West Virginia and Tennessee, virtual sitting ducks. The Japanese had trained carefully, and had modified their Kai Model 2 torpedoes to accommodate the shallow waters of Pearl Harbor. While caught by surprise, the USN was fortunate that its carriers were not in port, and that the Japanese had failed to destroy many of the support and repair facilities. 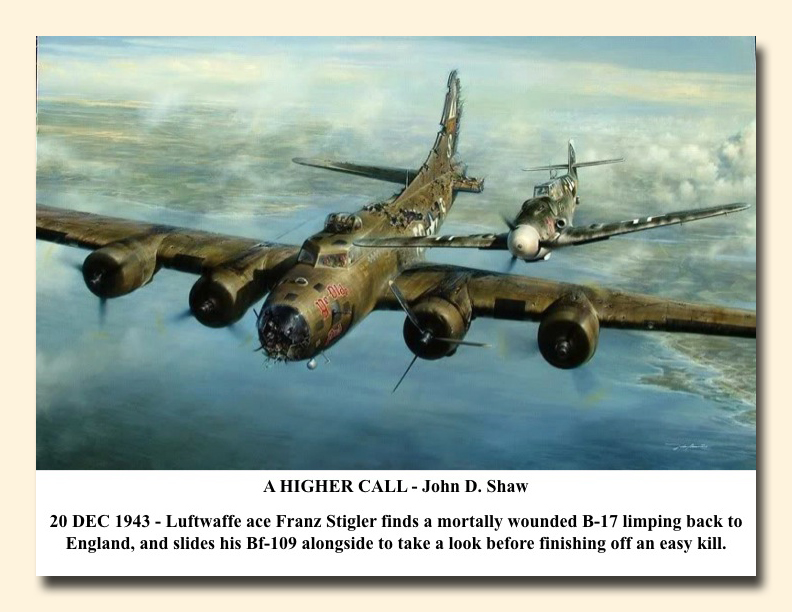 Encountering a mortally-wounded B-17 limping back to England, Stigler anticipated an easy kill and another opportunity to avenge his brother’s death at the opening of WWII. As he approached the virtually helpless American plane, however, he saw the faces of the dead and wounded crewmen. Then, Stigler’s eyes met those of pilot Charles Brown. Despite the potentially severe consequences of letting an enemy plane escape, Stigler felt that he had to answer a higher call of honor . . . mercy.

On his first combat mission and expecting it to be his last, Brown marveled as the enemy Bf-109 stuck with him to the North Sea. His adversary then saluted and veered away, allowing the astonished Brown to journey safely home. With this encounter engraved into the minds of both pilots for decades after the war’s end, the two men remarkably located one another in 1990. In the years that followed, their friendship developed to the point where Stigler considered Brown to be as precious as the brother he had lost. Note: For a fascinating CNN article on this event and its aftermath so many years later, see this. 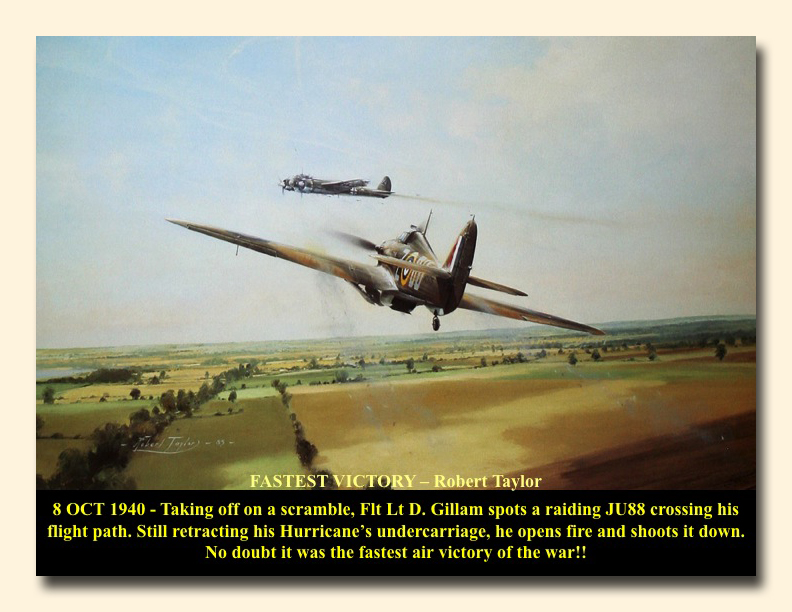 8 October 1940: While taking his Hawker Hurricane off from Speke airfield, a raiding JU88 crossed the airfield in front of Flt Lt Denys Gillam, who promptly shot it down. It was the fastest air victory of the war, and probably of all time. Robert Taylor’s painting shows Gillam’s Hawker Hurricane, guns blazing while undercarriage is still retracting. 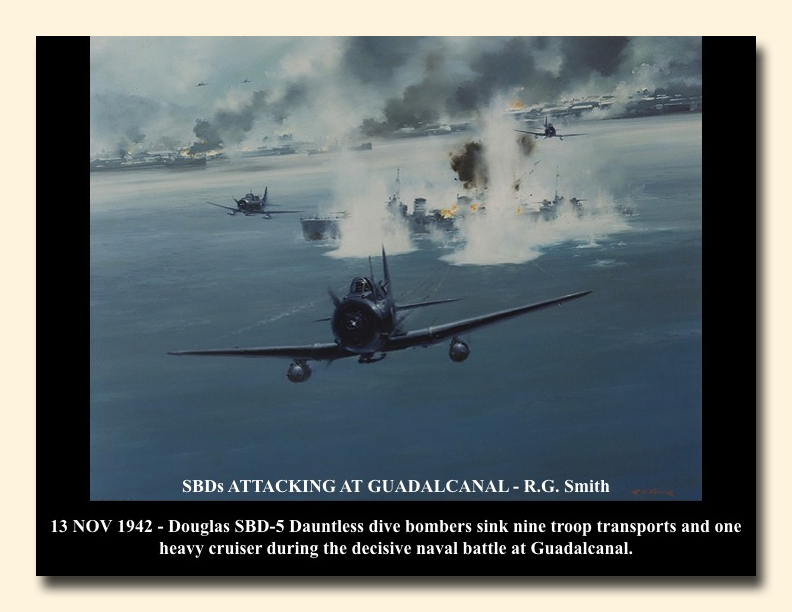 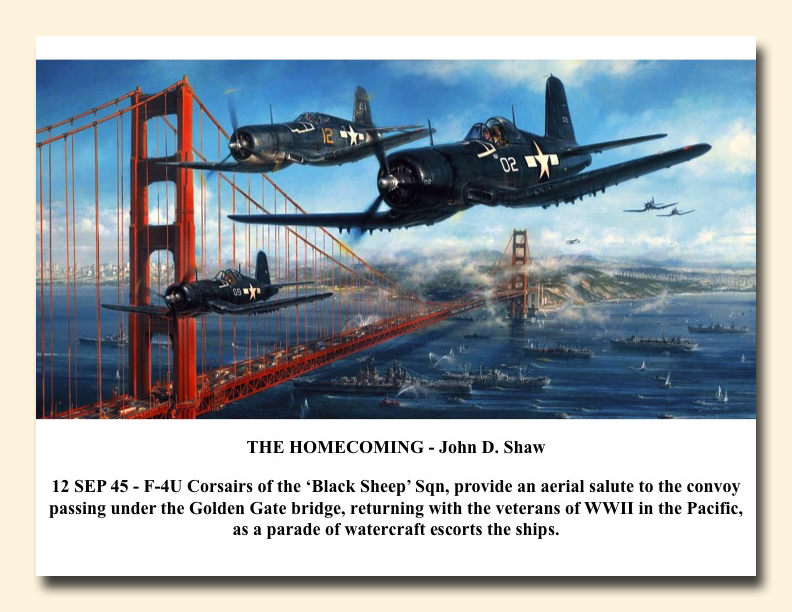 September 12, 1945. For countless American boys who sailed off to war in the Pacific, the Golden Gate Bridge was their last sight of home. Many would never return. Now, the veterans of WWII witness the joy of the nation they saved. A parade of watercraft escorts their convoy into San Francisco Bay while Corsairs of the “Black Sheep” provide an aerial salute. Stationed in California, the Black Sheep planes are factory fresh except for a war-weary model used for training. Like the heroes below, this tired fighter will soon retire, its mission accomplished. America is free. No homecoming would be sweeter than this.