One of my key objectives in this blog is to honor the legacy of WWII military aviators in whatever small way I can, and it’s a special thrill to receive comments from visitors with personal connections to the people and events in the posts.

The first of these relates to “Koga’s Zero,” by Jim Reardon. A visitor had evidence to support the contention that a family member had been the captain of the ship that transported the aircraft to California for flight testing, not the individual named in Reardon’s book.

The second arrived a few days ago in relation to the fourth image in the post “Beautiful Aviation Art–Part One.” Here’s the comment from the visitor:

I responded and received the following:

“Thank you for your prompt reply.  I have attached the photo of the plaque in England and a photo of my Dad and his crew along with a copy of the back of the photo which has all but one name of his crew. The missing name is of a man who flew only one mission with this crew which is why Dad couldn’t remember his name.

“The last time Dad flew was in June of 2011 with my son who is in flight school now and is a graduate of the Air Force Academy.  Dad folded his wings on May 13th 2012 at the age of 96 and we read “High Flight” at his memorial service. He and the rest of the crews that flew in WWII did an enormous job and I just want to make sure that the information is accurate.”

I could not agree more, so I contacted the author of the original slide show, my friend and fellow ex-fighter pilot Yago F. de Bobadilla, Maj. Gen. SAF (ret). He has corrected the English and Spanish text and sent me a link to the artist’s website, which contains the same mistaken reference to the 333rd Bomb Squadron rather than the 323rd. It’s probably nothing more than a typo, but that doesn’t make the correction any less significant.

Here’s the text of a Wikipedia article on the history of the aircraft and the efforts of the Collings Foundation to honor her memory by restoring another B-17G to 9-0-9’s original configuration, although there is some question about whether the colors on the substitute aircraft match those of the original. The images are from the article with embellishments added by me.

The Nine-O-Nine, a B-17 Flying Fortress heavy bomber of the 323rd Bomb Squadron, 91st Bomb Group, completed 140 combat missions during World War II, believed to be the Eighth Air Force record for most missions, and never lost a crewman as a casualty. B-17G-85-DL, 44-83575, civil register N93012, owned and flown by The Collings Foundation, Stow, Massachusetts, currently appears at airshows marked as the historic Nine-O-Nine.

The original aircraft was a block 30 B-17G manufactured by the Boeing Company. She was nicknamed after the last three digits of her serial number: 42-31909. She was added to the USAAF inventory on December 15, 1943, and flown overseas on February 5, 1944. After depot modifications, she was delivered to the 91st BG at RAF Bassingbourn, England, on February 24, 1944, as a replacement aircraft, one of the last B-17s received in factory-applied camouflage paint.

A former navigator of the 91st BG, Marion Havelaar, reported in his history of the group that Nine-O-Nine completed either 126 or 132 consecutive missions without aborting for mechanical reasons, also believed to be a record. M/Sgt. Rollin L. Davis, maintenance line chief of the bomber, received the Bronze Star for his role in achieving the record.

After the end of hostilities in Europe, Nine-O-Nine was returned to the United States on June 8, 1945, and was consigned after the war to the RFC facility at Kingman, Arizona, on December 7, 1945, and eventually scrapped. Another B-17G (Serial # 44-83575) has been returned to her wartime configuration under the auspices of the nonprofit Collings Foundation of Stow, MA and given the name “Nine-O-Nine.” The Collings Flying Fortress was built at Long Beach, CA by the Douglas Aircraft Company and accepted on April 7, 1945. Although she was too late for combat, #44-83575 did serve air-sea rescue duties as part of the Air/Sea 1st Rescue Squadron and later in the Military Air Transport Service.

In April 1952, #44-83575 was instrumented and subjected to the effects of three different nuclear explosions. After a thirteen-year “cool down” period, #44-83575 was sold as part of an 800-ton scrap pile and Aircraft Specialties Company began the restoration of the aircraft. Damaged skin was fabricated and replaced on site; engines and props were stripped, cleaned, repaired, and tested; four thousand feet of new control cable was installed; all electrical wiring and instrumentation was replaced.

For twenty years, without a major problem or incident, #44-83575 served as a fire bomber dropping water and borate on forest fires. She was sold in January 1986 to the Collings Foundation. Restored to her original wartime configuration by Tom Reilly Vintage Aircraft, she represented one of the finest B-17 restorations and won several awards. 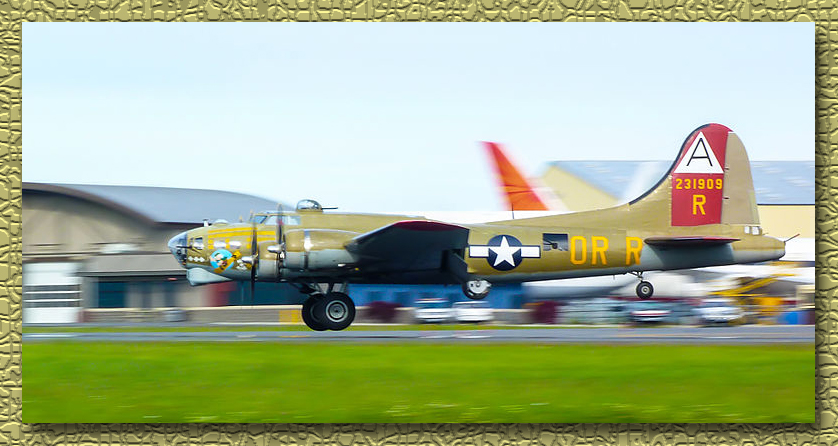 On August 23, 1987, while performing at an airshow at the Pittsburgh suburban Beaver County Airport, “Nine-O-Nine” was caught by a severe crosswind moments after touchdown. The right wing lifted in the air, finally coming down too far down the runway. Despite the efforts of her crew, she rolled off the end of the runway, crashed through a chain link fence, sheared off a power pole and roared down a 100-foot ravine to a thundering stop. The landing gear sheared off, the chin turret was smashed and pushed into the nose; the Plexiglas nose was shattered; bomb bay doors, fuselage, ball turret, wing and nacelles all took a tremendous beating. Engines and propellers were also torn from their mounts. Fortunately, there were no fatalities to the crew or riders although there were injuries.

For a second time, this B-17 “rose from the ashes.” With nacelles from the famed B-17 Shoo Shoo Baby, thousands of volunteer hours at Air Heritage Aircraft Restoration Inc., support from the folks of Beaver Falls, Pennsylvania, and donations from individuals and corporations, she was made whole again to carry on the proud and rugged heritage of the B-17. Since the crash at Beaver County Airport, the B-17 has succeeded in visiting over 1200 tour stops.

I have included more images below with captions as an addendum to the original post. 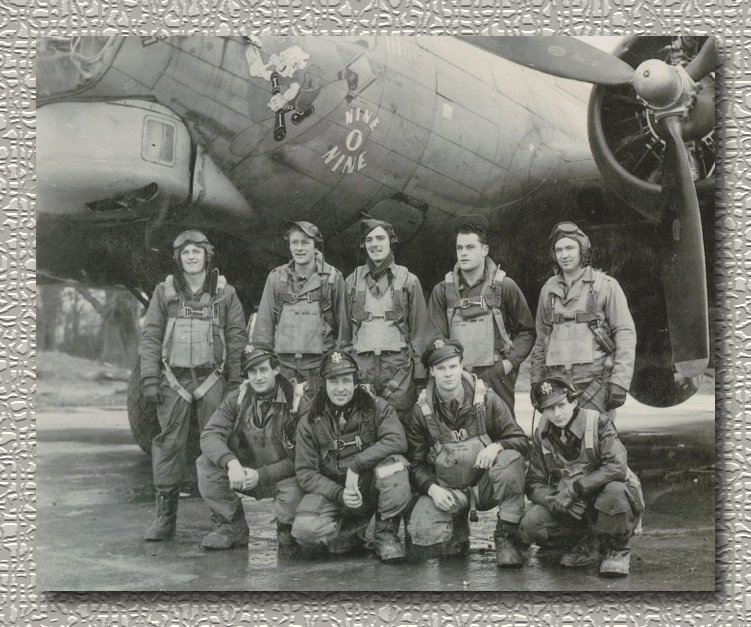 The Crew of Nine-O-Nine (credit the visitor) 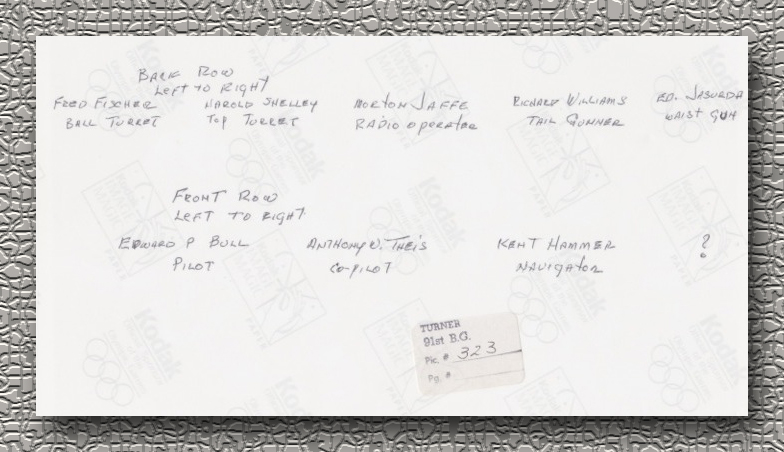 Back of the photo (credit the visitor) 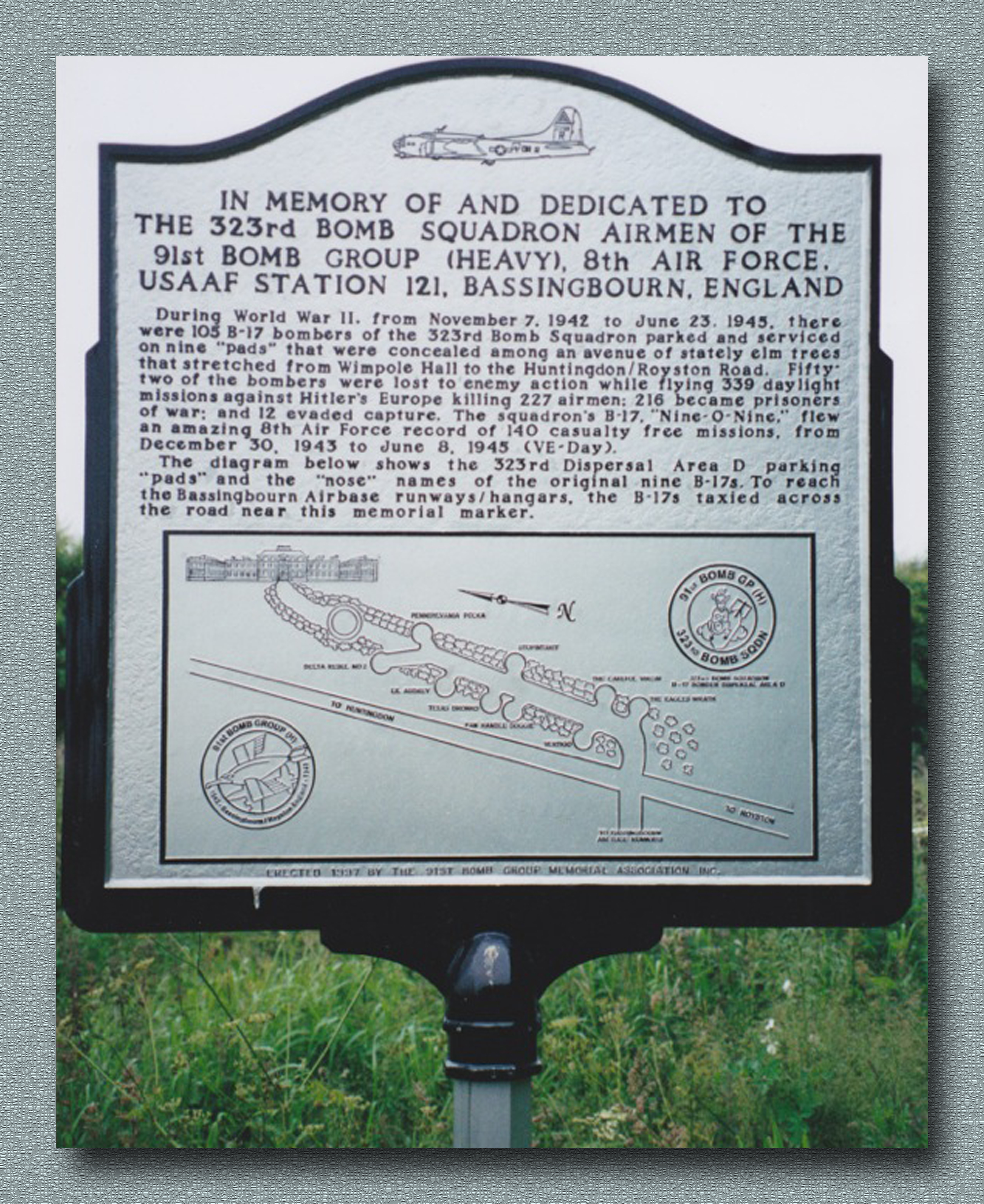 The Plaque at Bassingbourn (credit the visitor) 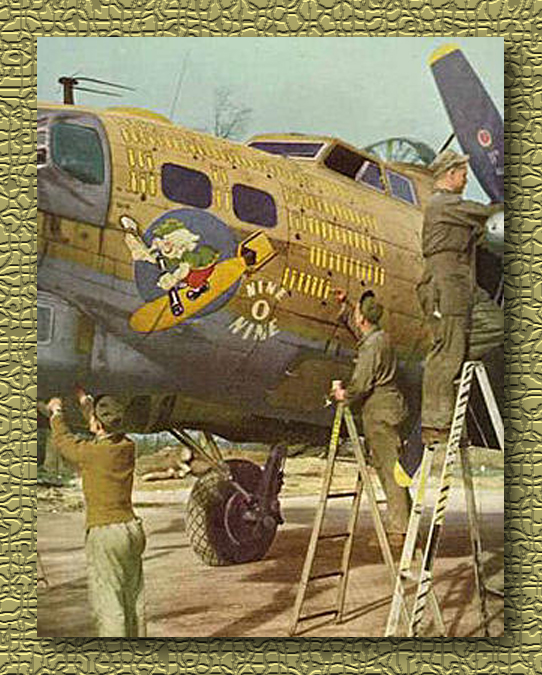 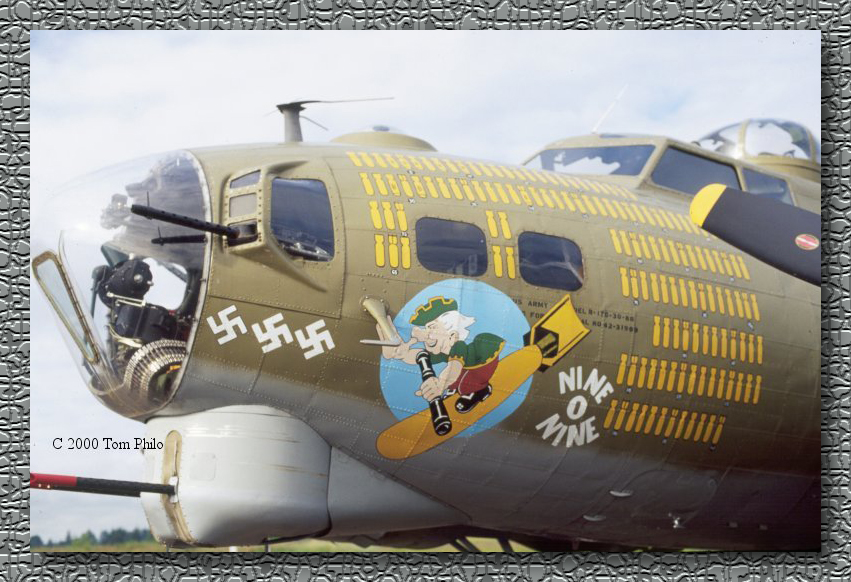 2 Responses to Addendum to “Beautiful Aviation Art – Part One”