We continue with the six-part series to showcase some of the finest examples of art depicting events of the WWII air war. I discovered the original images in a gorgeous slide show created by a good friend and fellow fighter pilot, Yago F. de Bobadilla, who rose to the rank of Major General in the Spanish Air Force. Hauptmann Hans-Joachim Marseille, better known as the Star of Africa, was probably the most formidable opponent the British ever encountered in the air. He was victorious in 158 aerial combats against the Royal Air Force, 154 of which were fighter aircraft.

Marseille died undefeated whilst bailing out of his Me 109, which had developed an engine problem on the return leg of an uneventful sortie.

Marseille is seen here at the moment of his 150th aerial victory on September 15th, 1942. On this day, he fought and defeated no less than seven Curtiss Kittyhawk fighters in an incredible eleven minutes. 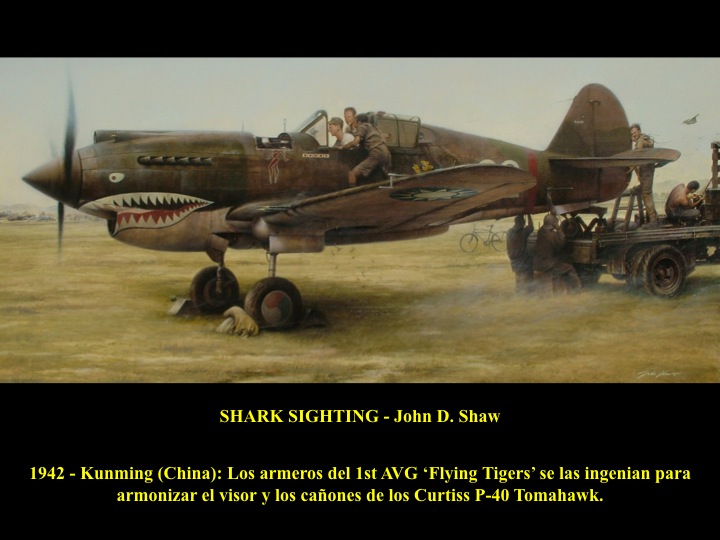 1942 – Kunming, China. Before the pilots of the legendary 1st American Volunteer Group “The Flying Tigers” could take to the skies against the enemy, the all-important task of boresighting the .30 caliber wing guns of their P-40’s had to take place. The ingenious armorers of the AVG were often forced to improvise, but as the Tigers’ incredible combat record can attest, these great Americans got the job done! Artist John D. Shaw has recreated this scenario, featuring likenesses of actual AVG personnel, such as “Tex” Hill and armorer Chuck Baisden. 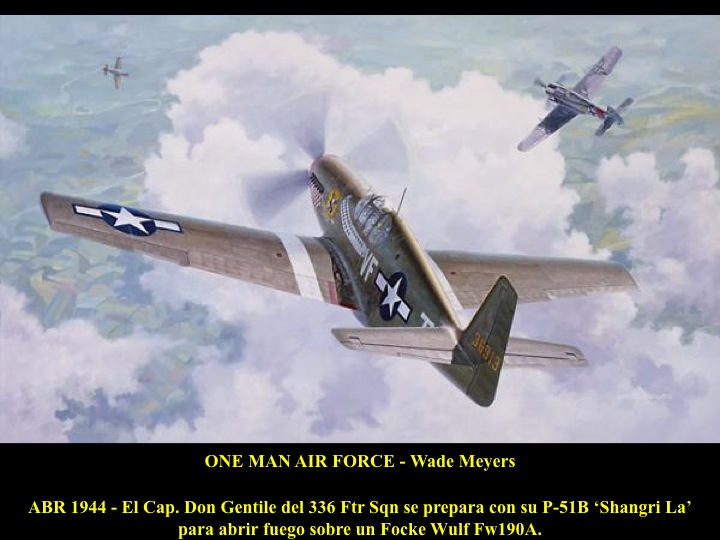 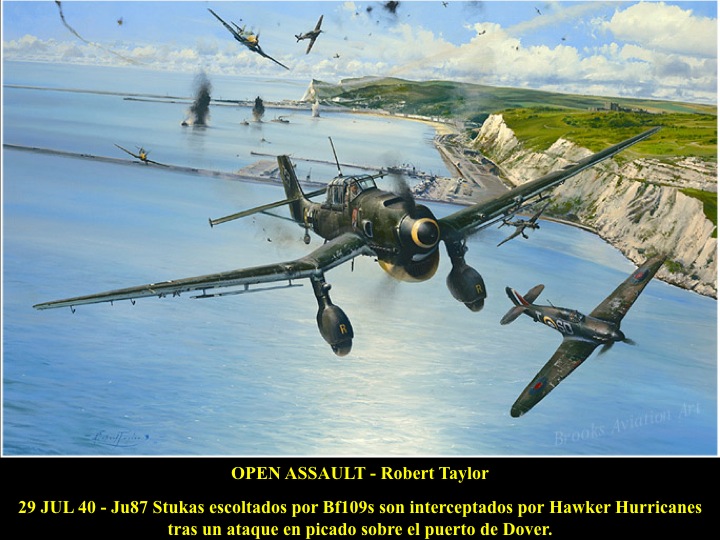 The Junkers Ju87 Sturzkampfbomber, known to the British simply as the Stuka, had already acquired a deadly reputation across Europe, its siren screaming as the ungainly dive-bomber struck terror into the hearts of those below. In 1940 its pilots crossed the Channel with their grim-looking aircraft to terrorise the southern towns and ports of England. Robert Taylors painting Open Assault, depicts Hurricanes of 501 Squadron attacking a force of Ju87 Stukas as they dive-bomb naval vessels and installations in the port of Dover on 29 July 1940. High explosive bombs detonate within the sheltered anchorage as escorting Bf109s from JG51 race in to protect their lumbering charges. Four Stukas and two Me109s are dispatched, for the loss of just one RAF aircraft. 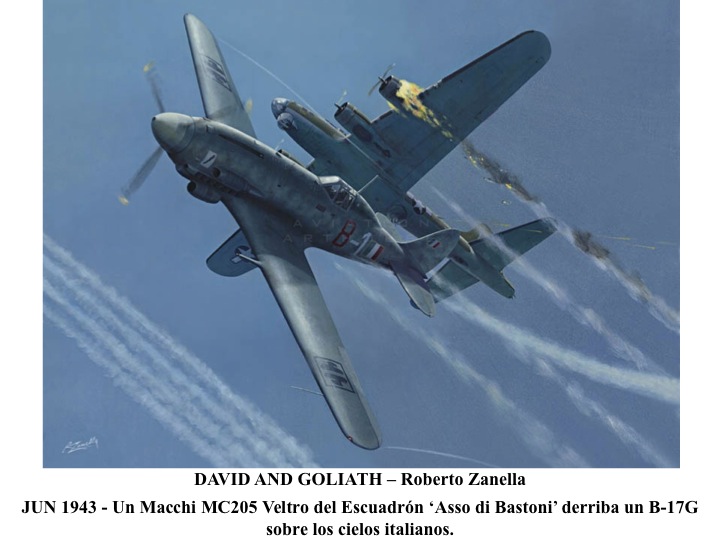 A Macchi MC205V “Veltro” fighter demolishes a B-17G Flying Fortress of the 15th U.S. Air Force over the Italian skies. This Veltro belonged to the first Scuadriglia Asso di Bastoni (Ace of Clubs) of the first Gruppo Caccia of the NRA (Aeronautica Nazionale Republicana), the Air Force of the newly formed Italian Social Republic, which remained faithful to Mussolini and continued to work with the Luftwaffe after the Italian surrender.

At the time of the armistice, 112 Italian Veltro fighters went to the Aeronautica Nazionale Republicana Mussolini, while another 37 aircraft of the same model went to the Italian Air Force co-belligerent on the side of the Allies. MC.205s of the Aeronautica Nazionale Republicana played a major role in defending Italy against the American B-17 Flying Fortresses and B-24 Liberators on the road to their targets in Germany, Yugoslavia and Italy, and gained a large number of victories against the new P-51 Mustang fighters. By the end of the war, Veltros of the Republican Nazionale had shot down a total of 58 Allied aircraft. 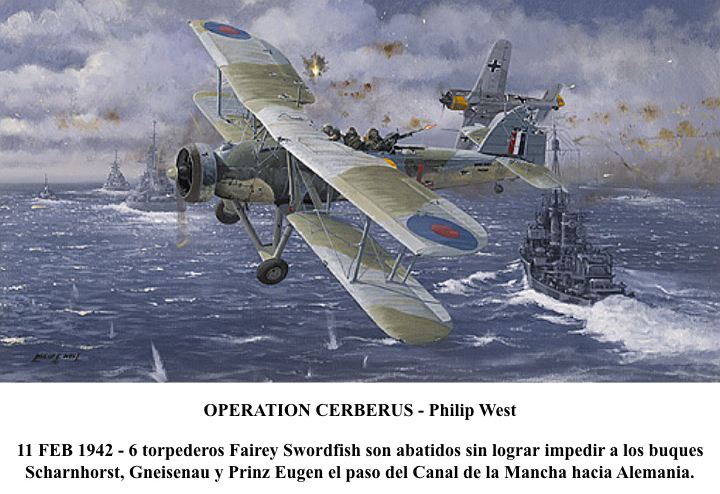 The Channel Dash (officially known as Operation Cerberus) was one of three operations during the Second World War for which the Fairey Swordfish was to become the most famous. Heavily outgunned in the Straits of Dover on this day in February 1942 by the German warships Scharnhorst, Gneisenau and Prinz Eugen, with their accompanying flotilla of destroyers and motor torpedo boats, and with top cover provided by deadly fighter aircraft of the Luftwaffe, all six Fleet Air Arm Fairey Swordfish were shot down. Only five of the eighteen aircrew survived. Here we see the Swordfish flown by Sub. Lt. Kingsmill and Sub. Lt. Samples with PO Bunce in the rear, fighting for their lives with his machine gun. The bravery of the Fairey Swordfish aircrew in this and all other operations is a matter of history and must never be forgotten. 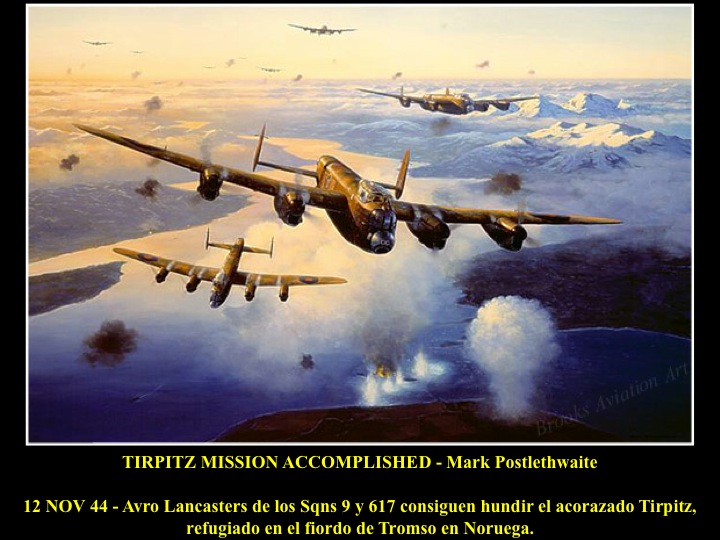 During World War II, the German battleship Tirpitz became the scourge of Royal Navy. Although she had been damaged in attacks by Royal Navy midget submarines and  carrier-borne aircraft of the Fleet Air Arm, she remained a serious threat after being moved into a fjord in northern Norway where she threatened the Arctic convoys and was too far north to be attacked by air from Great Britain.

The task of sinking her was given to Avro Lancasters of No. 9 and No. 617 Squadrons, who operated from a staging base in Russia to attack Tirpitz with Tallboy bombs. They damaged her so extensively that she was forced to head south to Tromsø fjord to be repaired. This fjord was in range of RAF Avro Lancaster bombers operating from Scotland, and from there, in October, she was attacked again, but cloud cover thwarted the attack. Finally on 12 November 1944, the two squadrons of Avro Lancasters attacked Tirpitz, capsizing her. All three RAF attacks on Tirpitz were led by Wing Commander JB “Willy” Tait, who had succeeded Wing Commander Cheshire as CO of No. 617 Squadron in July 1944. 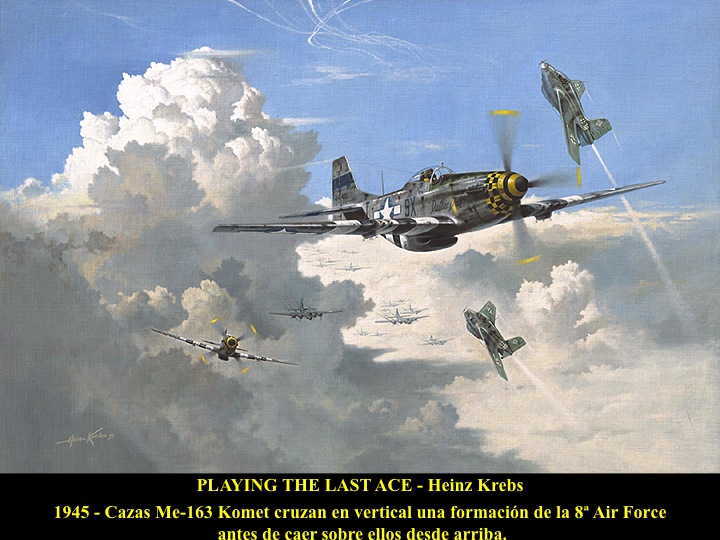 The Messerschmitt Me-163 rocket fighter aircraft, perhaps better known as the Komet, was possibly the most radical German manned fighter aircraft design to actually enter the WW II combat theatre. Here Me-163 Komet fighters of the Luftwaffe climb vertically through an 8th Air Force bomber formation and its top fighter cover before swooping down on the heavies for their short but often deadly attack. 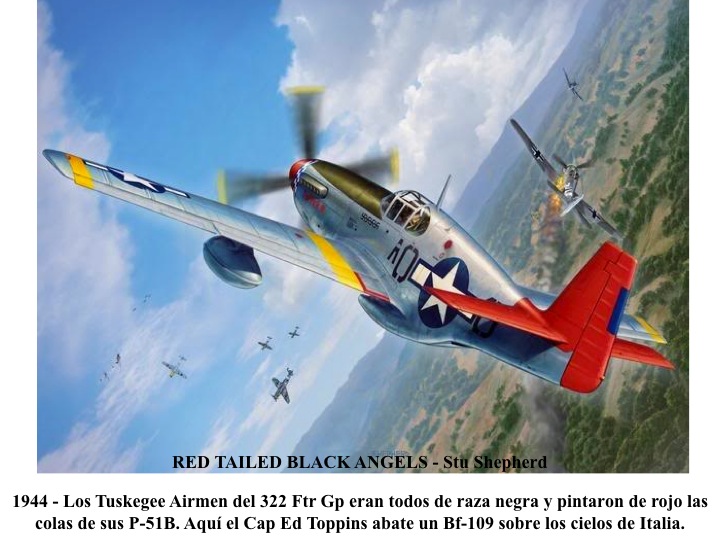 Artist Stu Shepherd captures the moment in which a P-51B Mustang flown by Capt. Ed Toppins of the 322 Fighter Group shoots down a Bf-109 in the skies of Italy in 1944.

This unit, born of the racist society of America in the ’40s, was an experiment to determine if blacks were capable of flying planes and successfully engaging the enemy. The “Tuskegee Airmen” demonstrated that well in spite of the difficulties both at home and abroad, specializing in the role of bomber escort during hazardous daytime raids over the heart of Europe. Grateful bomber crews coined the nickname “Red Tailed Black Angels” from the bright red tails of their Mustangs. By the end of the war, Tuskegee Airmen had scored a total of 109 enemy aircraft shot down at the cost of 150 pilots killed in action.