In Part One of “Beautiful Aviation Art,” I introduced the planned six-part series by speculating that I knew the author. At the time, conjecture was my only option because I had not been able to confirm that he was in fact the same, the one and only, Yago F. de Bobadilla, a captain in the Spanish Air Force on an exchange-officer assignment with the United States Air Force at Luke AFB, Arizona, during my tour of duty there as an instructor pilot in the F-4 Phantom II.

My dear friend (from 40 years ago) Tosh:

I still can’t believe I literally stumbled upon your webpage when I was surfin’ the net the other night, looking for something totally unrelated to the world of aviation. When I saw your name in the home page, it tickled my fancy making me wonder if it could really be you the guy I had been with during those wonderful years flying F-4Cs in the 426 TFTS at Luke AFB. Then I saw you in a couple of photos and, lo and behold, it was confirmed that yep, it was really you, my good friend from way back then!!!

But then my amazement peaked when I started browsing through your various Blog and Logbook pages, and in Single Ship I come upon a Post dated April 18, 2011 and titled BEAUTIFUL AVIATION ART – Part One. Out of curiosity, I opened the Post and….. Oh, my gosh!!!!…. there you are reminiscing about a Spanish Air Force fighter pilot you had befriended 40 years ago flying Phantoms in Arizona!!!

Tosh, you have one hell of an incredible memory to remember faithfully all those details about our great conversations together, after all these years. Well, yes here I still am, alive and well, and hoping to rekindle the good camaraderie we enjoyed during those three years.

If you read this mail, I hope you won’t trash it ’cause I have lots of stories to share with you. Plus I have updated (and improved) AVIATION ART – WORLD WAR II…..and I can email you AVIATION ART – THE JET AGE (it’ll blow your socks off).

Waiting to read your reply, your good Spanish friend

Before I try to characterize my reaction at receiving the email, I need to offer an explanation in the form of a joke. It may seem off-point, but please bear with me.

A street bum walks into a bar and stands just inside the entrance, waiting politely to be acknowledged. The bartender recognizes the bum as a regular panhandler around town and has never had any trouble with him, but he still isn’t eager for the guy to be hanging around outside the bar, much less sitting on a barstool. “May I help you?” he asks.

“Yessir, I believe you can. I was standin’ on the corner at Seventh and Vine, that’s my usual spot, ya see, and this dude drives up in one o’ them fancy sport convertibles with the top down. Unlike most folks, he actually looks at me, then he apologizes ‘cuz he didn’t have no spare change. He must o’ seen my eyes glancin’ over to the two cases of wine sittin’ on the passenger seat, ‘cuz he smiles, opens the top o’ one, hauls out this here bottle and hands it to me.”

When the bum pauses in his story, the bartender says, “Well, that’s good, but what does that have to do with me?”

The bum sets the bottle on the bar, points at the top, with its dark red lead seal and cork. “Imagine my surprise.”

Okay, so if you get the point of that joke, you know how it felt to receive this email. Yago and I have communicated a few times since then, and I’ve been meaning to continue with this series as a tribute to him for gathering these paintings together in one place so I can share them with any visitors to the site who might be interested. This image reflects the unique nose art of one of the B-24’s in the Zodiac Squadron. The original nose art was painted by Phil S. Brinkman while he was assigned to the Army Air Force Station 174 in Sudbury, England. Brinkman joined the Army Air Corps in the summer of 1942. He was assigned to Special Services, when he entered the army, since he was an accomplished commercial artist at the time. Shortly after he arrived at Davis-Monthan Airbase in Tucson, Arizona, he completed a large mural which attracted attention and was seen by the commander of the 834th Bomb Squadron, Captain “Jip” Howell, who set up a transfer to bring Brinkman into the 834th. The idea of adorning the B-24’s of Capt. Howell’s with unique nose art resulted in the famous “Zodiac Bombers” including “Leo.“ 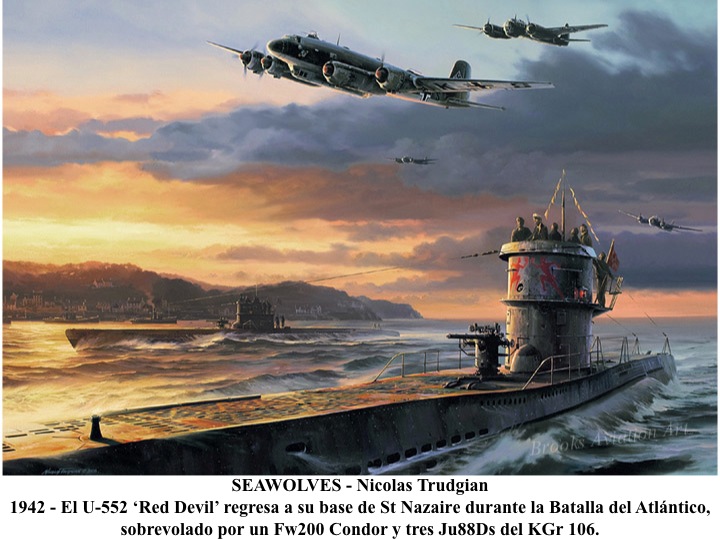 Captain Erich Topp steers his Type VIIc U-Boat number U-552 Red Devil towards the sanctuary of the base at St Nazaire after another patrol during the grueling Battle of the Atlantic in 1942. In the skies above, heading back out to hostile waters is a giant Focke Wulf 200 Condor from III/KG40 and three Ju88Ds from KGr 106 whose missions will be to search for vulnerable Allied shipping for the submarine Wolfpacks to attack. The third-highest scoring U-Boat ace, Captain Erich Topp sank a total of thirty ships and damaged three more whilst commanding the Red Devil.

This painting is aptly titled as it depicts Focke-Wulf Fw 190D-9’s of JG-26 intercepting B-24s high above Germany during the last months of the war. 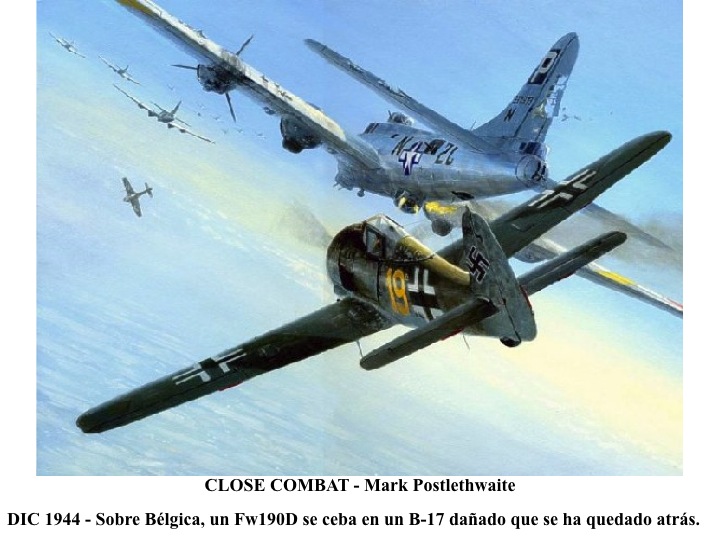 4 June 1942: One of the defining moments of the Pacific War occurred when the tide turned against the Japanese aggressors at America’s Midway Islands. Lieutenant Richard H. Best and his two wingmen in their Douglas Dauntless SBD dive-bombers have just launched a successful attack on the Japanese flagship aircraft carrier Akagi. The crushing defeat inflicted on the Japanese Navy by the very much smaller United States Pacific Fleet at Midway put an end to Japan’s ambition to dominate the central Pacific region and removed the Japanese threat to Hawaii. 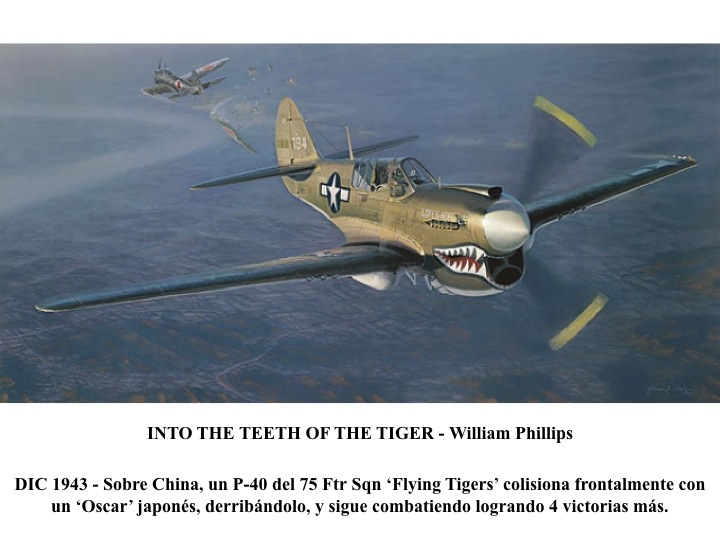 There’s more than one way to bring down an opposing fighter, as 1st Lt. Don Lopez learned on December 12, 1943. He and his comrades of the 75th Fighter Squadron were at 6,000 feet over South Central China when the young airman experienced his first scramble. Lopez ripped his P-40 into the middle of a flight of Japanese “Oscars” and quickly engaged one of them, flying directly at one another, firing steady hits. Lopez expected his opponent to break off, but neither did so. Head-on only a few feet apart, the Oscar swerved right … too late. Lopez lost three feet off the end of his wing, but the Japanese pilot lost substantially more, including control of his aircraft, which plunged toward the earth. Undaunted, Lopez pressed the attack again and scored enough victories to join the ranks of “ace” fighter pilot. (Tosh note: Let’s take stock of this for a moment. Lopez is a rookie on his first combat mission. He loses part of his left wing in a mid-air collision with a Japanese fighter and continues the engagement to down (probably with his guns) four more Japanese planes. Now that’s what being a warrior is all about.) 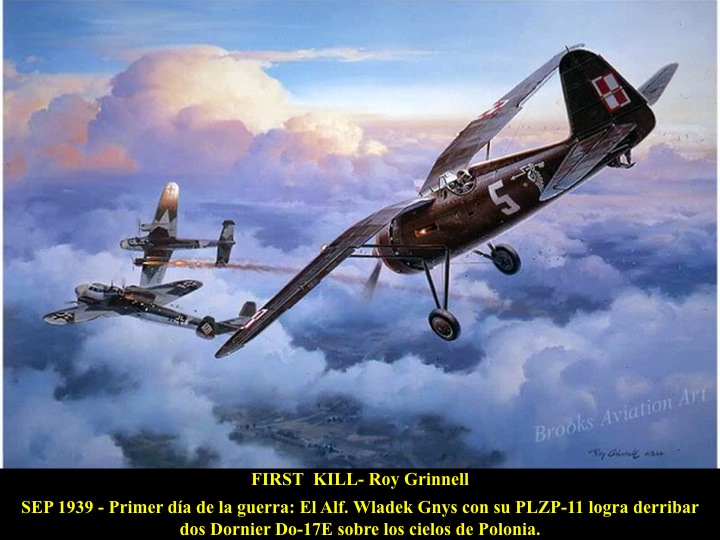 In the pre-dawn of September 1st 1939, units of Hitler’s Luftwaffe and Wehrmacht were poised to smash across Poland’s borders to begin WWII. At sunrise, formations of German bombers were over Krakow and attacked the Polish airbase of Rakowice. Meanwhile, several miles to the west on a secret airfield at Balice, 121 Fighter Eskadra (Squadron) of Army Krakow’s 2 Dyon (Air Regiment) was alerted to the attack by the noise of explosions and flaming horizon.

Leaping from his bed and pulling on his flight clothes, 28 year-old veteran flyer, 2nd Lt. Wladek Gnys, ran with his CO, Capt. Mieczyslaw Medwecki, to their gull-winged PZLP.11c fighters. As they took off to make an interception of the German attackers, the pair was surprised by fire from passing Ju-87 Stukas of I./StG2, and Medwecki was downed. In attempting to evade, Gnys went into a stall, but regained control just above the ground. Climbing once again, he managed to put two bursts into the engine of another Stuka, which turned away trailing a plume of smoke.

Later, at 5000 feet, Gnys spotted two Do-17E bombers of III/KG77 just above the rising early-morning fog. Putting his small fighter into a near-vertical dive, Gnys banked steeply toward the Dornier on the right and fired his four 7.7mm machine guns, silencing the rear gunner and hitting the port engine. He then climbed and banked to the left, away from his smoking victim, to pursue the second German. Attacking from the second bomber’s port side, Gnys dove and fired, getting hits on the cockpit. Realizing that the two mortally wounded Dorniers were on a collision course, he continued his dive below and away from them.

Returning to base, the victorious pilot did not see the two crashed bombers smoldering in a farmyard near the village of Zurada… the first victories over the Luftwaffe in World War II! Gnys later fought with the French Air Force in the Battle of France, the Royal Air Force in the Battle of Britain, and ended his combat career as the squadron leader of the 317F Squadron , RAF. 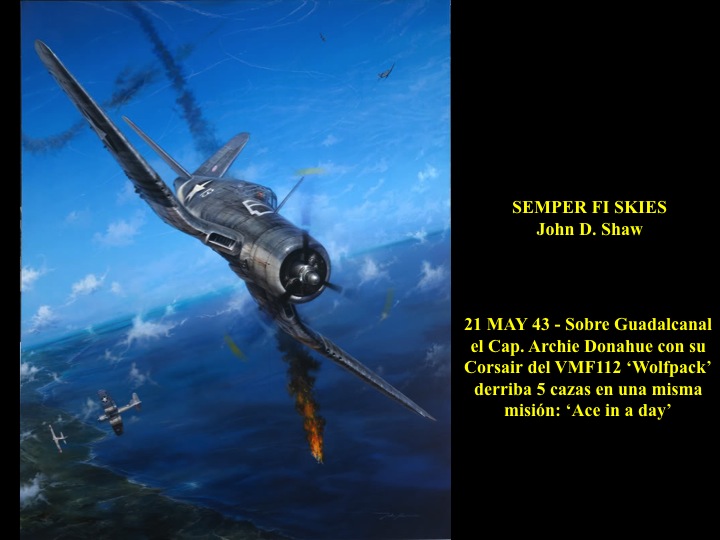 This scene depicts Corsairs of VMF-112 ‘Wolfpack’ in combat near Guadalcanal in 1943. On May 21, Captain Archie Donahue became an “ace in a day” by shooting down 5 enemy aircraft in one mission. He would repeat this feat 2 years later while serving aboard the USS Bunker Hill.

“Raid on the China Coast” depicts Lady Lil of the Air Apaches 345th Bomb Group, 498th Bomb Squadron.  A B-25 is attacking Japanese shipping off the coast of China, April 1945.  Pilot:  Lt. Albert J. Beiga. The Raid was between Amoy and Swatow, west of Formosa.