Tragedy In Reno – Who Should Pay?

Credit for source photo used in the header: AP Photo/Ward Howes. (If you are looking at the Home Page fighter pilot header, click on the post title.) As you might imagine, the aviation community is tightly focused on this crash, and the aftermath will reverberate through the news in one form or another for some time to come. You don’t, of course, have to be an aviator to grieve for the dead, the injured, and their families. And as we might expect, like vultures to road kill, “ambulance chasers” will circle the crater in the ramp where the P-51 Mustang “Galloping Ghost” very nearly impacted into the crowd of spectators. Like a bomb, she became a deadly cloud of shrapnel. 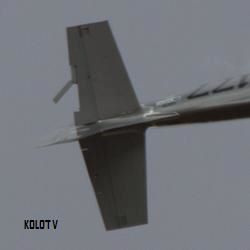 A friend of mine, who flew P-51 Mustangs in far more dangerous circumstances and for reasons far more noble than providing thrills (see my tribute to him in the Visitor’s Story Logbook here), sent me this link to an article that expands on some of the details I covered in my previous post on this topic. I had not seen this photo, which captures a split second in the sequence of very probable causal events leading up to the pilot’s loss of control. (Photo credit to Brian Dunning)

It appears that the trim tab on the left elevator is in the process of falling off. As explained in my post and the article, the trim tabs are the only part of the control surfaces preventing the elevator from deflecting upward into the slipstream as if the pilot had suddenly pulled back on the control stick. At 500 mph, the dynamic pressure over the elevator can produce in excess of 10 “g”s acceleration, enough to cause the pilot to lose consciousness and result in structural failure of aircraft components.

My only quarrel with the article is that it’s written from the perspective that promotes the “deepest pockets” syndrome: file a lawsuit and name everyone even remotely connected with the incident. It assumes that legal repercussions are inevitable and someone should pay. But of course. The author of the article is described thus: Max Kennerly is an aviation lawyer with The Beasley Firm in Philadelphia, Pennsylvania. This post, “Accountability After The National Championship Air Races Disaster,” originally appeared at his blog, Litigation & Trial.

As explained in the article, in aviation law this tactic is considered essential to protect the rights of the plaintiffs because National Transportation Safety Board Investigations are necessarily protracted affairs. To prevent the passage of time from allowing guilty parties to escape retribution, use the “shotgun approach,” and who cares about collateral damage? Here’s a case in point:

A pilot leaves his twin-engine airplane at a maintenance facility for an oil change and returns a few hours later to fly back to his home base. Shortly after takeoff, he experiences engine trouble, can’t reach an emergency field, and dies while attempting an off-airport landing.

The investigation discovers that the engines seized due to oil starvation. The mechanic performing the work had drained the old oil, changed the filters, signed off the logbooks, and a supervisor verified that the job had been completed according to the maintenance manual. Failure to put any oil in the engines is obvious proof of gross negligence and points directly at the mechanic and his supervisor.

According to FAA regulations, it also implicates the pilot-in-command, who just as obviously didn’t perform even the most basic pre-flight inspection, especially after a procedure he knew would remove all the oil from the engines. It only takes a few moments to check the dipsticks, and failure to do that cost him his life.

In an example of a legal system gone mad, the pilot’s survivors named the aircraft manufacturer as a plaintiff in the lawsuit. I’m sure many self-respecting lawyers could defend that as doing their jobs, but no one will ever convince me that this isn’t abuse of the system by any reasonable definition of the term.

In this case, even I can agree with the article that legal culpability might extend into many layers of involvement with the Reno Air Races. But in keeping with long established precedent in aviation law, it wouldn’t surprise me in the least if Boeing turns out to be a plaintiff. Through a dizzying array of mergers and acquisitions, North American Aviation (the manufacturer of the Mustang) finally came to rest under Boeing’s corporate umbrella.

And that’s where some of the liability should obviously come to rest. How dare North American design and build what is arguably one of the finest fighters of WWII? They should have anticipated that almost 71 years after its first flight, someone might turn a Mustang into a deadly missile at an airshow.

And yes, I’m being sarcastic. But I predict with confidence that one or more plaintiffs in the lawsuits sure to come will be light years removed from any rational connection to contributing fault. They will fall victim to the attitude that someone obviously had to be negligent for this tragedy to occur.

Aviators know the risks when they slide into the cockpit. Spectators fill the stands at airshows voluntarily. It’s been over 60 years since the last fatality among the crowds who enjoy watching airplanes perform on the edges of their capabilities. But these realities will be shoved aside by the rush to blame and the eagerness to profit from the result.