Posted on September 3, 2011 by Tosh McIntosh

We had a saying in the Fighter Weapons School at Nellis AFB, Nevada.

“There are two kinds of pilots you don’t meet very often: those who have hit the ground unintentionally, or those who have collided with another airplane in flight.” Hard reality supports the statement, and we used it as an attention-getter to begin both the low-altitude and air-to-air combat training portions of the syllabus.

With the exception of airshow formation flying, civilian airplanes generally stay away from each other. And when they don’t, it’s usually a tragic event. What follows is an example of how bad it could have been and wasn’t. Pure chance played a role, along with some nifty emergency response by the pilots involved.

This came to me from a friend with no indication of who wrote it, so all I can do is offer anonymous credit to the author. The story follows: 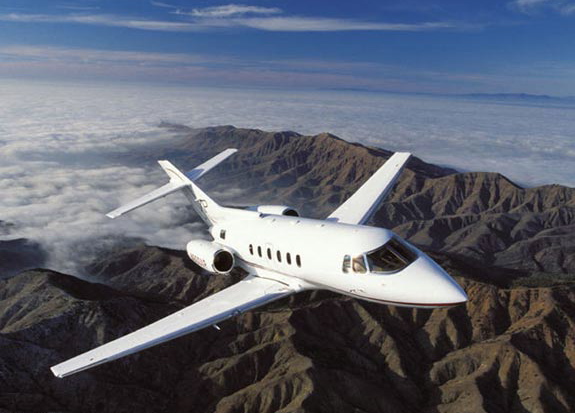 The mood couldn’t have been more relaxed aboard an executive jet carrying three Incline residents as it began its descent towards Reno-Tahoe International Airport. [Incline Village-Crystal Bay, Washoe County, NV, is a “census designated place” on the north shore of Lake Tahoe.]

Mike Chipman was dozing while his wife, Evy, read a book. Steve DiZio was also reading and occasionally looked up to check the flight’s progress on a GPS read-out.

Then they heard what sounded like an explosion coming from the cockpit. The cabin depressurized and the plane veered to the right before going into a steep dive.

“The pilot had just put on the seat belt sign, and a few minutes afterward there was this explosion . . . a really loud bang or crash from the cockpit,” recalled DiZio, a retired high-tech start-up manager.

Traveling from the Carlsbad Airport in San Diego, the Hawker 800XP jet had struck a glider in  a mid-air collision at 16,000 feet over the Pine Nut Mountains southeast of Carson City. The impact destroyed the jet’s nose cone. The glider became uncontrollable and the pilot, Japanese citizen and 30-year glider veteran Akihiro Hirao, parachuted safely back to earth.

The Hawker pilot quickly brought the jet back under control as the three startled passengers secured  their oxygen masks. After deducing that the damage to the starboard wing, part of which had caved-in and was leaking fuel vapor, was too extensive to have been caused by a bird, and that they would all be dead if they had  struck another conventional airplane, passenger Mike Chipman, a part owner of the Arizona Diamondbacks baseball team, surmised the truth. 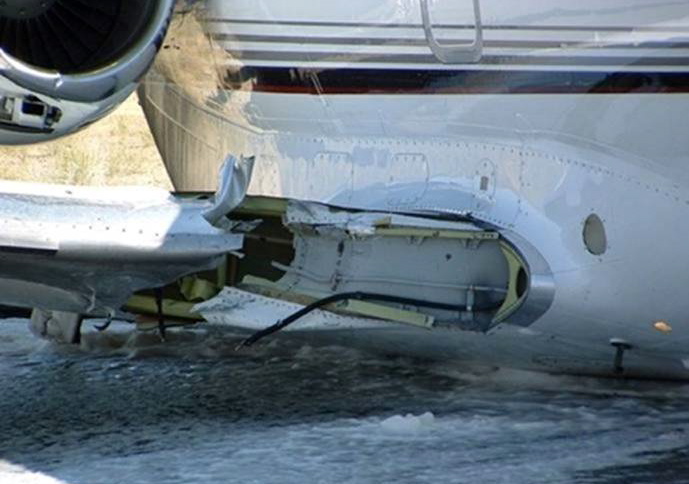 “I knew there were gliders all over the place . . . the only thing I could figure when we realized it wasn’t a bird was that it was a glider,” he said. DiZio and the Chipmans said they did not panic after the crash. “Things go through your mind, but it was sort of like a dream,” DiZio said. “There was nothing we could do. We just sort of went calm.”

“I did some deep breathing and said a few prayers,” Evy Chipman said.

“Though I was aware of the damage to the wing, there wasn’t much I could do,” said Mike Chipman.  ”The pilots clearly had it under control, but it certainly had my attention.”

Though the passengers didn’t know it at the time, the starboard engine had failed. Moreover, part of the glider had ripped its way through the plane’s nose and into the instrument dash,  causing it to burst into the pilot’s face and lap. Despite a gash to her chin, Captain Annette Saunders remained in control throughout the remainder of the  flight, even after a two-foot piece of the nose structure had bent its way in front of the cockpit window. 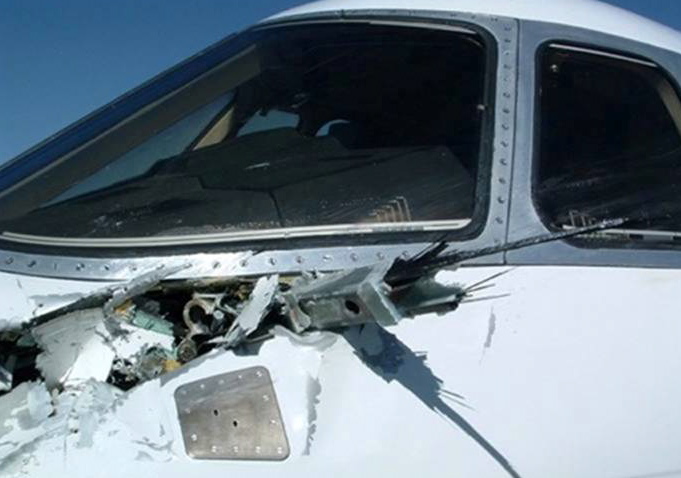 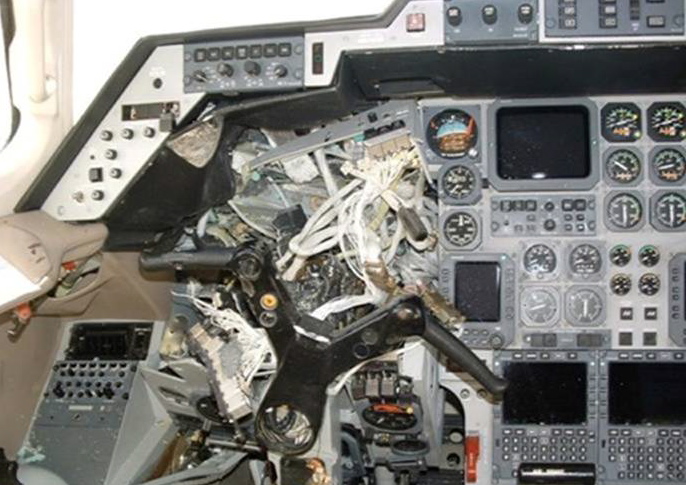 After passing the Carson City Airport , she brought the plane around for an emergency landing. As they leveled-out, the co-pilot turned and yelled over the noise that they had lost control of  their landing gear and would skid to a halt on the aircraft’s belly. 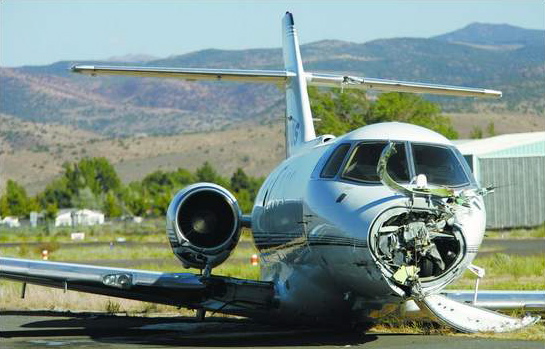 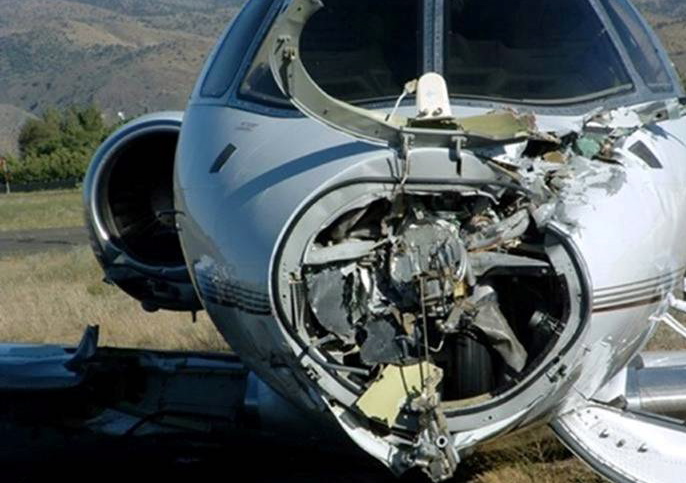 Though passengers assumed the emergency position, they said the landing could not possibly have  been better. “The landing was as smooth as you could imagine, not even a bump,” DiZio said.  “We stayed on the runway right up to the end, so the pilot must have been perfectly lined-up even with the crosswinds.”

Upon landing, pilot Saunders was taken to the Washoe Medical Center with minor injuries. Glider pilot Hirao was found unharmed by Washoe Tribal Police later that evening. According to Lyons County Sheriff’s Department Captain Jeff Page, the tribal police spotted a  Japanese man, asked him if he was a glider pilot, and told him that a lot of friends were looking for him. They drove him back to the Minden-Tahoe Airport, where he had taken off earlier that afternoon. He was greeted by friends, examined and quickly released with only scrapes and bruises.

“To be quite honest, I don’t think anybody was expecting the outcome that we had,” Page said. “In my 20 years in law enforcement, I’ve never seen a mid-collision where anybody survived. Here, everyone made it.”