I regret the absence of screen grabs in this post to illustrate the process of designing my cover, but based on the advice of “counsel” I’ll keep it under wraps until the decision to indie-publish the novel becomes a reality. Based on a recent post by Dean Wesley Smith, that might occur sooner than previously anticipated. Stay tuned for ramblings on that topic. In the meantime, I have added images from Editing Historical Fiction, a fascinating website that makes me want to write a Western.

Last week after using InDesign to format the interior of my novel for the trade paperback edition, the last remaining dragon rose from the depths of the abyss and challenged my progress in preparing for the possibility of indie-publishing. The ebook front cover needed to be joined by a spline and back cover, a task as unfamiliar to me as any of the others encountered on the journey so far.

Using the handy Build Your Book .pdf file offered to Amazon’s CreateSpace account holders by Walton Mendelson, I calculated the final trim size of the cover for a 5.25″x8″ trade paperback. The width of the spline has to be matched to page count, so with a new InDesign document of those dimensions, I divided the frame into front and back covers and spline. 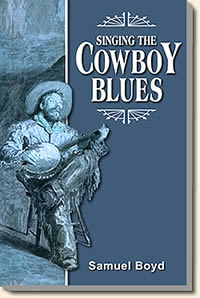 The books on my shelves provided examples of how professional designers think a wraparound cover should look. But as Mendelson points out with regard to the relationship between fonts, font sizes, leading, and margins used within the covers, significant variation is by far the rule rather than the exception. It’s called design, after all, and if everyone liked the same solution to interior layout and covers, we wouldn’t need more than one designer.

If commonality exists, it appears in the way designers deal with the demarcation lines between the spline and the front and back covers. With the front cover obviously being the most important of the three components, it typically will display the significant images or illustrations. To avoid what are called “hard edges,” splines are usually filled with a complimentary, solid background color that wraps across the junction with the back cover and fills it as well.

But the designs that caught my eye were those in which the front cover background continued across the spine and back cover with what appears to be a continuous image. One example is the Grove Press trade paperback edition of Charles Frazier’s Cold Mountain. It is a dark cover, dominated by black and shades of blue, as if the observer is looking from a position of height at a series of ridge lines extending to the far horizon. It carries well the feeling of a cold and very forbidding landscape. 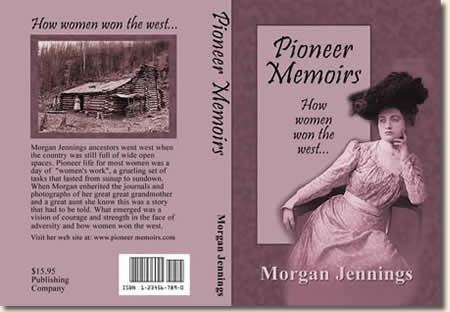 One of the lessons learned during this process was that the larger the printed size of an image, the higher the resolution needs to be to avoid pixelation, or fragmentation, and loss of detail. I have no idea how the designer did it, but in this case that wouldn’t have mattered because the entire image is blurry, as if looking through many miles of haze.

I decided that the source photo for the background of my cover was not of sufficient resolution to allow an acceptable wraparound image. After many false starts, I finally came up with the idea of reversing the background image on the front cover for use on the back, and cropping a thin section from the original source to place on the spline. When viewed flat, as the cover appears prior to being printed on a book, the demarcation lines are visible, but they don’t stand out. With the cover folded around the spline edges of a printed book, I doubt anyone will even notice them.

Three specific tasks drove me to join Photoshop Elements user forums. The first involved how to create a white rectangle on the back cover for the ISBN number and bar code. To anyone proficient with Photoshop, this may seem like a trivial task. But when I tried to find the steps in Adobe’s online help pages, nothing appeared to address my objective specifically. One question posted by me on a site called Elements Village, however, resulted in a number of solutions. 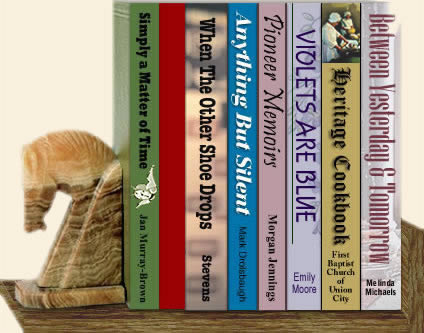 The second task related to typing text on the spline. The standard in American publishing is for the text to read horizontally left to right with the book lying on its back, front cover facing up. I first attempted that with the spline positioned vertically within the Photoshop workspace and used the vertical type tool. But that put the individual letters stacked from top to bottom one on top of the other. The horizontal type tool put the letters perpendicular to the thin strip of vertical spline.

I posted another question on the forum, and while waiting for an answer got the idea of rotating the original background image 90 degrees to the left and cropping the spline strip out of it. This produced a horizontal spline as it would appear with the book lying on its rear cover. The horizontal type tool then worked as expected, and with the title and author’s name in place, I rotated the spline strip 90 degrees back to the right. The spline now appeared as it would with the book sitting on a shelf spline-out.

And wouldn’t you know it, I’d just completed that when someone answered my question on the forum with a simpler way of accomplishing what I wanted. Interestingly enough, a few forum members asked me to post my improvised workflow, I suppose out of curiosity and the desire to learn how to use the application even better than they already do.

Next, the back cover. The majority of paperback novels on my bookshelves include back cover copy, described by Sari Mathes of Llumina Press as follows:

The words you place on the back cover of your book are the words that will either walk your book right up to the cash register or march it back to the shelves. Your back cover is the final billboard, a point-of-sale advertisement, and the last piece of promotional material that hits potential purchasers on their way to pay.  It can either lure readers inside your pages with well-chosen words or knock the wind out of your sales with faint and feebly-phrased copy. Your back cover is an invitation for readers to purchase and wasting that space on anything else won’t ensure you any immediate RSVP’s. 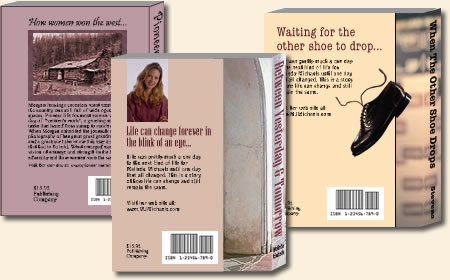 My first draft of the cover copy used a shortened version of the query letter I’m currently sending to agents that is based on six structural elements: main character, inciting event, dilemma, choice(s) faced by the main character, consequences of making or not making the choice(s), and a generalized statement of the outcome.

Based on the suggestions of a fellow writer, I reexamined the copy and discovered that I’d allowed a cardinal rule of query letters (Don’t end on a teaser that hides the outcome from the agent) to creep into the copy where it does not belong. So I revised it based on reading a number of the back covers on my shelves.

They all concentrated on the main character, inciting event, and choice(s), but did so in more detail than possible in the typical query letter, which has to include a number of other elements within the standard single-page maximum length. In effect, this focused more attention on the first 20-40 pages of the novel, and ended with a teaser designed specifically to leave the reader wondering what happens and eager to find out.

The first version used white text to enhance readability on the heavily patterned background image of a mountain with rocks, trees, and clouds. Again based on the comments of a fellow writer that the block of white text was a little hard to read, I changed it to black and experimented with ways to improve its readability as well. This effort resulted in yet another question posted on the Elements Village forum, and I tried a number of suggested solutions with varying degrees of success.

My “final” choice (at least for the moment) is a method that adds a layer between the text and the mountain background that appears to extend the clouds (concentrated on the left side of the background image) over to the right side. This effectively blocks the view of the underlying mountains enough to avoid conflicting visually with the text. I prefer this solution to one that surrounds the text with a more distinctive box of lighter color because it avoids the straight-line demarcation between the box and the mountain background.

A few books on my shelves include the title on the back cover, and I decided to do that as well. My reasoning is simple: I think it’s a very good title, and I want it visible whether the book is seen from the front, side, or back. 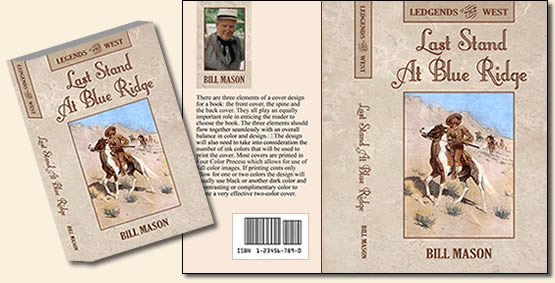 And now, about writing that Western . . .