Mysteries of the Blogosphere

This blogosphere never ceases to amaze me. 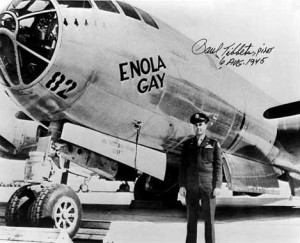 I read a book about the final days of WWII combat in the Pacific and published a post on February 15, 2011 titled “Not Just Another Day at Work.” The post connected the events chronicled in the book with a link to a 360-degree panoramic view of the cockpit of a B-29 named the Enola Gay. Col. Paul Tibbets sat in this “office” and on August 6, 1945, dropped the atomic bomb that changed the world forever.

On March 4, 2011, my spam filter nabbed a comment related to this post and held it for moderation. The source of the comment is a website: countrieswithnuclearweapons.com. I’ve never heard of it any more than the website has heard of me. And yet, somehow in the mysterious world of blogging, this site found my post and inserted a comment with a link to my site:

Submitted on 2011/03/04 at 5:01 pm
[…] Britain became the third nuclear power when it successfully detonated an atomic device in October 1952. This video contains some eyewitness accounts and impressive visuals of the destructive power of the H-Bomb. Nice related topic here: http://toshmcintosh.com/2011/02/not-just-another-day-at-work/ […]

There’s an old joke that expresses my initial reaction to receiving this comment: 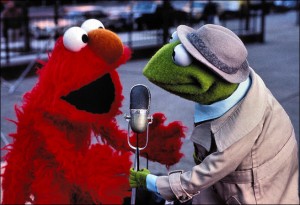 A reporter is standing on a street corner conducting a human-interest survey for a TV station. (Image from MuppetDanny on MuppetWiki). He stops a well-dressed passerby and asks, “What do you think is the most important invention of the last half century?”

The man pauses for a moment and replies, “I would say the advances in medicine.” He then lists some of the most significant new drugs and surgical procedures. The reporter is impressed with his answer.

The next person, also clean-cut and distinguished, answers the question with, “High tech and computers.” He then lists ten contributions to our daily personal and professional lives as the result of new devices. The reporter is really inspired with this answer.

The trend continues for the next hour or so, and then the sky turns dark, rain threatens, and the reporter still needs one more interview to complete his assignment. The problem is that foot traffic has all but disappeared as pedestrians scurry for shelter from the approaching storm.

But all is not lost when from around the corner appears a well-known panhandler who lives on the streets of downtown. The reporter decides that an interview with him might provide an interesting contrast to the ones he has “in the can.”

As the man approaches with his hand out, the reporter gets a five-dollar bill out of his wallet and holds it up. “This is your lucky day, fella. All you have to do is answer one question.”

The man displays a mouthful of less-than-perfect dentition in a broad smile and accepts the five bucks. “Lay it on me, brotha, ’cause I got the ansa’s.”

“In your opinion, what is the most important invention of the past half century?” 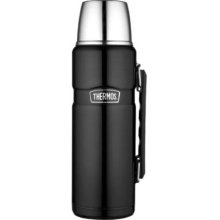 Without a second’s hesitation, the man replies, “That’d have to be the thermos bottle.”

The reporter stands speechless for the first time that day and finally stammers, “Could you explain that?”

“You betcha. When I’s a workin’ man, I’d put hot coffee in it in the mawnin.’ In a couple hours on break, I’d enjoy me some o’ that nice, hot coffee.”

“What’s so impressive about–?”

“But sometimes I’d put cold lemonade in it. In a couple hours I’d be drinkin’ me some, still cold as ice.”

“But, sir, I still don’t understand why you consider that–”