As a former USAF fighter pilot with a personal vested interest in tactical aviation, there are times when the current system for providing new combat “rides” for aviators seems astonishingly inept, if not irreparably broken. Recent news only serves to highlight my concerns.

And let me make it clear at the outset that my use of the word “clown” is in no way intended to demean any particular individual mentioned in this post. This isn’t an attack on individuals, but a comment on the collective process, which I contend is laughable if it weren’t so pathetic. The Lockheed Martin F-35 Lightning II Joint Strike Fighter (JSF) is a family of single-seat, single-engine, fifth generation multi-role fighters under development to perform ground attack, reconnaissance, and air defense missions with stealth capability. The F-35 has three models: the A is a conventional takeoff and landing variant (for the Air Force), the B is a vertical/short takeoff and landing variant (V/STOL, for the Marines), and the C is a carrier-based variant (for the Navy, in case that isn’t obvious enough). The program is being principally funded by the United States, with the United Kingdom and other partner governments providing additional funding. It is being designed and built by an aerospace industry team led by Lockheed Martin.

The United States intends to buy a total of 2,443 aircraft for an estimated $323 billion, making it the most expensive defense program ever. The United States Air Force budget data in 2010, along with other sources, projects the F-35 to have a flyaway cost that ranges between $89 million and $200 million over the planned production of F-35s, depending on the variant. Cost estimates have risen to $382 billion for 2,443 aircraft, at an average of $92 million each, which casts doubt on the actual number to be produced for the U.S.

One of the ongoing JSF controversies involves research and development on an alternate engine. I’ve addressed that issue in earlier posts and will not do so again here, except to say that the soaring expenditures associated with the alternate engine are only one of the reasons that in January, 2011, Defense Secretary Robert Gates expressed the Pentagon’s frustration with the skyrocketing costs of the F-35 program. “The culture of endless money that has taken hold must be replaced by a culture of restraint.” Focusing his attention on the troubled V/STOL F-35B, Gates ordered “a two-year probation,” saying it “should be canceled” if corrections are unsuccessful.

Gates, however, has also unequivocally stated his support for the program. “Having a robust, large quantity of fifth generation tactical air fighters is something I view as a core requirement, and in this era of increasing budget constraints, my goal has been to ensure that core capabilities for all the services are protected. This has meant increasing development funding for the F-35, scaling back or cutting other programs that are not as essential, and intervening directly to get the program back on track, on budget, and on schedule.”

Certain private analysts claim that the whole F-35 program is becoming a money pit. “The incredibly unfortunate phrase ‘too big to fail’ applies to this aircraft more than any other defense program,” said Richard Aboulafia, an aerospace industry analyst with the Teal Group. 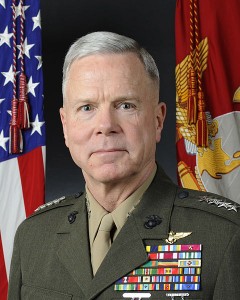 For years, the Marines have taken the position that they wanted to operate an all “jump-jet” F-35 fleet off of both amphibious ships and aircraft carriers. But the newest clown-act scenario arrived on Tuesday, March 1 with the announcement by Marine Corps Commandant Gen. James Amos, that the Marines are going to buy F-35Cs in addition to their B-model jets. The purpose of this change, apparently, is to allow the Navy and Marines to continue keeping their squadrons integrated on Navy carriers, although eyebrows across Washington shot up about what this means for the B-model.

Amos has repeated that he is focused “like a microscope” on fixing the B, which has experienced the most troublesome development of the three variants. But the revelation that the Marines also will fly a few squadrons of Cs could be seen as a hedge against the possibility that the F-35B won’t survive DOD’s two-year “probation” as directed by SecDef Gates, and which Amos wants to end early, by the way.

Lt. Gen. George Trautman, deputy commandant for Marine aviation, told Inside the Navy in October that the Marines still wanted such a fleet but would wait until the B-model is tested aboard a carrier. Amos, however, said that the Marines would go ahead and buy some carrier variants before that happens. “That was the initial plan,” Amos said. “We’ve backed up just a little. We’ve always been fans of [tactical aircraft] integration. As the [Navy] secretary said, we have three squadrons right now on Navy carriers.” 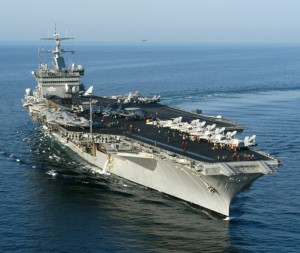 “So we like that,” he continued. “It’s good for both our services in the naval force. But when we sent the requirement in for V/STOL aircraft, our hope was we would be able to someday fly those versions off of CVNs, naval aircraft carriers. That’s yet to be seen whether that will be possible, so in the meantime it would seem prudent that we would buy some number of C variants even early on so that we can begin to transition our force.” It would be a “partial number on the overall buy of the V/STOL,” he said. “That is our primary focus.” He did not give any specifics on how many carrier variants the Marines would procure and when this would happen.

Okay, so the Marines are taking an extensive look at tactical air integration across the fleet to determine the proper mix is of C’s for the Navy and Marine Corps. The goal is to ensure that Marines will fly off carriers in strike fighters as well as in vertical take-off and landing aircraft.

To grasp the underlying reasons for what is being called “TacAir Tension,” one needs to understand that today, Navy and Marine fighter pilots fly different versions of the F/A-18 Hornet, but the Navy’s E and F models and the Marines’ A and C models all take off and land using the catapults and arresting wires on Navy carriers. Sounds reasonable, doesn’t it? The Marines don’t have any carriers, so they use the Navy’s.

Now here’s the part that can only cause an outside observer to wonder what in the world are these people thinking? 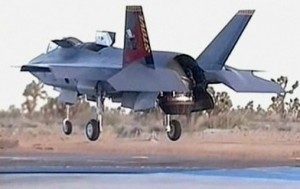 We’re supposed to be on the same team. Inter-service rivalries and bickering should have long since gone the way of the buffalo, but get this: the F-35 has caused a long-running battle between naval aviators. Will the Navy permit the Marines to fly their B-models on aircraft carriers? If so, according to one contingent, why bother building 95,000-ton nuclear-powered behemoths when all the Navy really needs is big-deck amphibious ships?

Ohmigosh! Do you suppose the Navy is concerned about the possibility of a doomsday scenario in which F-35B operation off of carriers will eventually result in the death of the carrier? Horrors! And we know how these Navy guys are about their carriers. They have a right to be. But let’s get real. This is like a modern version of the domino theory, in which one event today is projected into the future with catastrophic results based on nothing but a group of folks asking, “What if?”

In this case, according to Amos at least, it appears a truce has been struck behind the scenes when he said, “That’s yet to be seen, whether that’s possible” to fly Bs on carriers. In the meantime, with the Marines buying Cs, the Navy and Marines will continue deploying squadrons side by side. Carriers are saved, the Marines keep their own tactical air, and harmony is preserved in the naval service. The American people, who are footing the bill for the massive and bottomless money pit known as the JSF, should get a nice, warm fuzzy to know that.

But there’s a catch. If the Marines buy Cs and their B-model can’t be salvaged, they’ll lose the ability to fly fast jets from “big-deck amphibs.” What does that 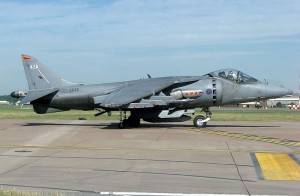 mean, exactly, and why is it important?

A big-deck amphib is a warship suitable only for aircraft with V/STOL capability, which means helicopters and only one fast jet, the aging AV-8B Harrier. Existing big-deck amphibs also have a “well deck,” a hangar-like deck located at the waterline in the stern. Taking on water and flooding the well deck lowers the stern and allows boats and amphibious landing craft to dock within the ship. This facilitates moving cargo between the ship and smaller craft during amphibious operations. 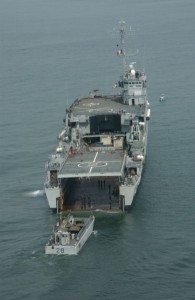 The two America-class amphibs under construction, however, were not designed with well decks. This makes them suitable only as “Marine Corp aircraft carriers” to serve helicopters and V/STOL fast jets. But if the F-35B variant doesn’t survive probation, all Marine jump jet capability will disappear when the Harriers are retired, and these brand-new ships will be all dressed up for a party that isn’t going to happen.

Amos and the amphibious factions of Quantico want the next America-class amphib to get a well deck yesterday. That may happen, but the Navy says if it tried to change the designs of the two ships under construction to include a well deck now, it will cost years of delay and millions of extra dollars.

And, according to Amos, if the B-model can’t be saved, which he believes it can, at the moment there’s no plan for what to do.

Just what we wanted to hear. Another clown act has arrived at the big tent in the circus we call weapons systems acquisition.

3 Responses to JSF Circus Act – The Clowns Take the Stage