It’s sometimes hard for me to remember that this website/blog doesn’t exist behind the screen or under the keyboard in the guts of my laptop. It’s out there somewhere, and I can only look at it from the front side just like everyone else until I log in. Then the “back pages” open up, and the world of the WordPress blog tool and publishing platform appears so that I can act as the administrator.

One of the available functions there monitors the update status of the theme I’m using and the only three “plugins” installed. WP-Stats keeps track of the number of posts, pages, comments, etc., Akismet blocks the spam, and Count per Day keeps tabs on the numbers game of blogging that I’ve mentioned in previous Blogbook posts.

A recent update to the counter significantly changed the appearance of the data by upgrading the graphs, and it added functions for monitoring the visitors’ countries in both tabular form and with a map. None of this information offers anything more than window dressing without trying to make sense of it, which I’ve been doing for about five months now since installing the plugin on October 14, 2010.

Both in terms of total visitor and “read” count, the trend indicates consistently increasing traffic. The visitors-per-post figures continue to baffle me, because I can’t figure out why certain posts attract more attention than others. It may well be that reader interest in the subject matter has far less to do with it than where the links to the posts appear on the page of a browser. If that’s the case, paying any attention to the numbers is really nothing more than an exercise in using statistics to warrant unjustified conclusions.

In spite of the possible futility of the effort, my daily routine usually involves checking the data a few times during the day for spam and latest visitor and read counts. If I have published a post that morning, I normally check an hour or so later to see if that post has received any attention, then maybe that afternoon, and almost always before logging out in the evening.

Last night about 10 o’clock, I noticed something that froze my eyes in place. In 22 hours, the counter had recorded about 140 visitors (a little higher than normal) and 750 reads (almost four times the previous maximum). When I checked the visitors-per-post listing for that period, the numbers indicated for the top posts had in fact increased from the usual 10-15 per day to 40-45. I signed off wondering what had happened to cause such a sudden spike in the numbers.

The last update to the Count per Day plugin had been installed about a month ago. When I signed in this morning, the update feature indicated a new one was available, so I installed it and immediately ran into trouble when the link to the data failed to appear in what is called the “Dashboard.”

I checked the plugin page and found that the function was supposedly active, but I still couldn’t find it. After a bit of troubleshooting, I ended up on the settings page for that plugin (for the first time ever) and noticed that the selection for who could view the data showed “custom.” In the drop-down menu I found “administrator,” selected it, and suddenly the date became available again. I have no idea why this was necessary.

Back on the data page, once again I noticed an unusual increase in the total counts for today, especially since it only covered a period of about ten hours. Something mysterious has happened again out there in the blogosphere. Take a look at the screen grab below to see what I mean. (Click on it to expand. The back button on your browser returns to this view.) 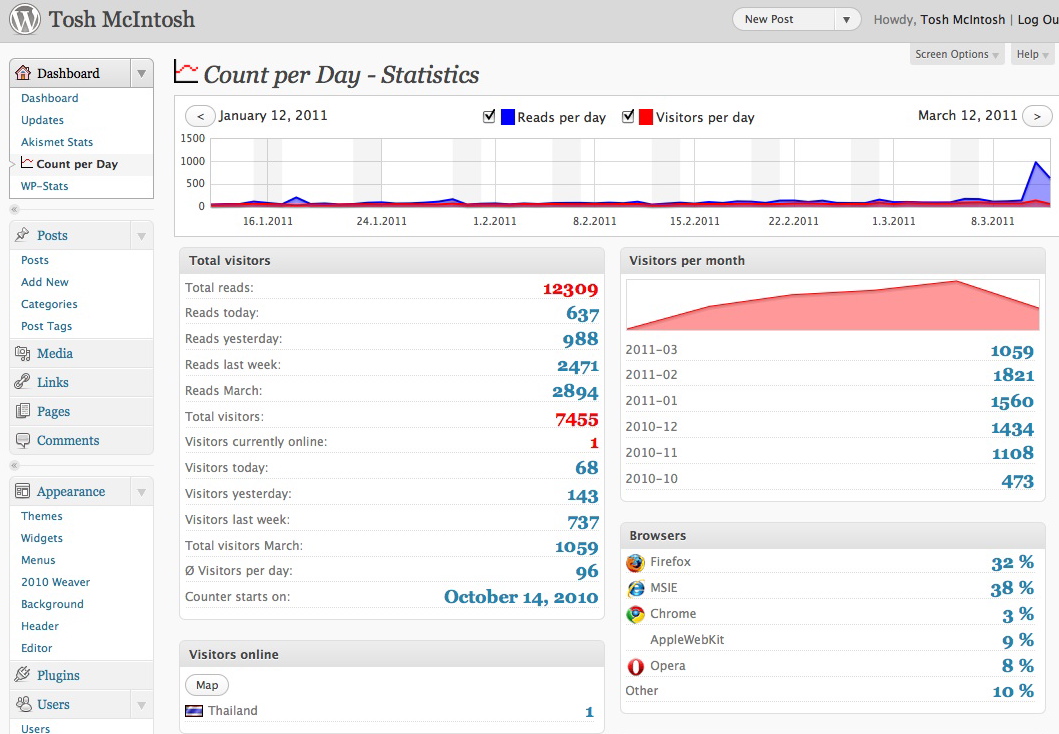 Holy Toledo, Blogman. Where are all these folks coming from?