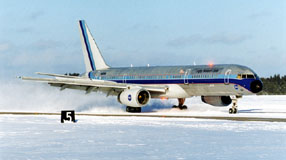 According to National Transportation Safety Board investigators, the American Airlines Boeing 757-200 that ran off Runway 19 while landing at Jackson Hole, Wyoming, on November 19,  2010, was missing a bushing, indicating that “the linear actuator in the automatic speed brake mechanism had been improperly installed.” Without the bushing, a cam and switch could have become misaligned and caused a malfunction. Investigators found no discrepancies in the aircraft’s air/ground, autobrake, and thrust reverser systems.

If you haven’t read my earlier post “Fastest Tricycle in the West,” I recommend you do before continuing here as I take a look at what this finding means, which is that investigative attention is now focused on the speed brake/spoiler system on the 757. First, the terms “speed brakes” and “spoilers” both refer to hydraulically actuated panels on the upper (sometimes lower) wing surface that remain flush (“stowed”) with the surface unless the pilot automatically or manually extends (“deploys”) them. The diagram below shows the location of the 757’s various speed brake/spoiler panels. 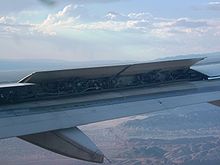 In flight, the “air/ground” switch prevents some of these panels from extending and limits the amount of extension on others. This is an important safety feature. If every one of the panels deployed while airborne, the increase in drag and loss of lift would seriously degrade (or possibly destroy) the ability of the airplane to maintain flight. Many normal flight conditions, however, benefit from selective use of speed brakes to control airspeed and increase rate of descent.

Full extension of all panels is highly desirable in two situations on the ground: during an aborted takeoff, or on either a normal or emergency landing. In all cases, reducing airspeed (inertia) quickly is the objective to prevent overrunning the departure end of the runway.

Cockpit voice recorders (CVRs) and digital flight data recorders (DFDRs) capture information essential to the investigation of any inflight or ground incident or accident. A CVR does exactly what you would expect by recording the voices of the cockpit crew. A DFDR monitors multiple aircraft systems and flight/ground parameters, and this inforamation can be “mined” during the investigation.

This 757’s DFDR showed that the speed brakes were manually extended by the flight crew during the approach. While this is probably not a routine procedural action for the 757 (I’ve never flown one), it is perfectly reasonable for the pilot to use speed brakes to help shed excess speed if necessary when on the approach.

The speed brakes were in the armed position for landing. Again, this is a normal action, especially when considering that although braking action was reported as good, the crew would have assumed that the runway was to some degree contaminated with snow. To manually deploy the speed brakes on a 757, the pilot might pull aft on the control handle. To arm them, the pilot might lift the handle up, where it locks into place. 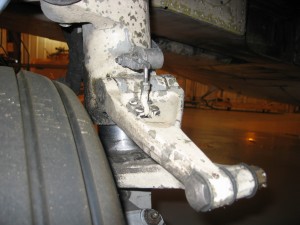 Automatic speed brake deployment occurs when the air/ground switch (typically fastened to the main landing gear, shown at right on a well-worn Cessna Citation) detects compression of the landing gear strut(s). The handle in the cockpit physically moves when this occurs, and normal procedures call for the crew to confirm that the automatic system does in fact deploy the speed brakes and be prepared to deploy them manually should they malfunction.

Although the DFDR does not monitor the position of individual spoiler panels, it provides a time-sequenced record of events. In this case, the air/ground system registered that the aircraft touched down, but then for about one-half second switched back to the air mode before registering ground for the remainder of the rollout. This is not normal (unless the aircraft bounced, but there’s no indication that this was a hard landing). Nor is the fact that during that half second, the speed brake handle momentarily moved toward the down position and then returned to armed.

The thrust reversers, strictly under manual control by the pilot, began to deploy during that half second and remained in the “in-transit” position for about 10 seconds. They then moved to stowed and back again to in-transit, this time for six seconds, before becoming deployed. It took 18 seconds from the time the reversers began moving until they were fully deployed.

This makes no sense. I can’t believe the pilot intentionally did anything with the thrust reverser controls to cause this sequence, and it indicates to me that they malfunctioned. What follows is speculation, but it’s not unfounded.

As noted in my previous post on this incident, the 757 has a reputation for thrust reversers “refusing to engage” and problems with the air/ground logic system. I think these two are not only inter-related, but demonstrate cause and effect.

To say that a thrust reverser deployment inflight is a serious emergency would be an understatement in the extreme. To help prevent that from occurring, when the air/ground logic system “tells” the airplane that it’s airborne, the thrust reverser controls are physically locked in the stowed position. They become unlocked only when the aircraft is on the ground and the air/ground logic system accurately communicates that to all the other related systems.

When I consider the evidence available, I’m dubious about the NTSB’s finding that nothing was wrong with the air/ground logic system.

If the air/ground switch malfunctioned on touchdown and didn’t transfer to ground mode, that could explain why the thrust reversers didn’t operate as designed. And although the passenger video mentioned in my previous post doesn’t provide a view of the 757’s spoilers, they might have malfunctioned for the same reason.

In that event, not all the spoiler panels would have deployed, nor would those that did have extended to their maximum designed angle relative to the upper wing surface. Under this scenario, the inertia-depleting effects of thrust reversers and speed brakes/spoilers would have been severely hampered.

That said, and to reiterate an important point from my previous post on this topic, by regulation the landing data used to determine if the 757 could land safely on the available runway length with the existing aircraft gross weight, weather, and runway surface conditions cannot include the beneficial effects of using those two systems.

I’ll be watching for further information and follow up as necessary to put a period at the end of this story.