What the Heck is Going On?

The Internet has irrevocably changed the way we live in fundamental ways, and as I mentioned in a previous post titled, “RIP – Best Available Version of the Truth,” one of the most significant is the speed with which anyone, anywhere, and at anytime can attract the attention of others. Combined with the fact that we seek our information from sources we believe promote our core beliefs, a new phenomenon has emerged: self-generating news.

What used to be a tendency to accept as true that which makes it into print is now reflected in the contents of the email inbox. You probably know one or more people who immediately forward items to a long list of recipients, including you. The motivating factor usually seems to be that of sensationalism founded in the nature of a scoop, the latest information about something the sender thinks you can’t live without a second longer.

I fell prey to that not too long ago, not as a proponent of what I’d received, but with the question that if the information in the video was based on fact, we should all be very worried. This forwarded item was ignored by everyone who received it except my brother, who took the time to check it out and sent me a link to a rebuttal source. 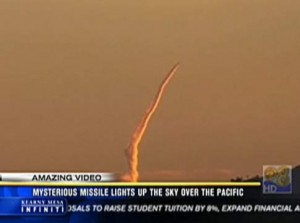 This, of course, then becomes a matter of which source you believe presents “the best available version of the truth.” And in truth, we probably should accept it as fact that anything we read should be viewed with suspicion. Everyone has an agenda today, and the Internet allows instant visibility through distribution at the speed of light.

Enter the latest item to my inbox, involving a news video of a white plume against a western sky, backlit by a lowering sun, accompanied by a report that appears to be well documented with expert opinion. I checked it out because I was curious, and strangely enough, the video was a deja vu moment all over again. 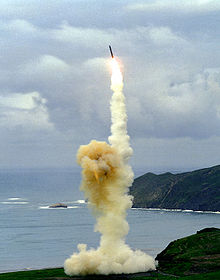 In the early 90s while flying as a DC-9 crew member with Continental Airlines, I departed Houston late one afternoon for a trip westbound. Approaching El Paso, while staring into a clear, darkening sky with the sun just below the horizon, the captain and I both noticed a rising plume of white with a speck of bright light at the top. Backlit by the sun, it was a spectacular sight, and it didn’t go unnoticed by the crews of any airliners on the frequency.

A pilot mentioned it to the air traffic controller and asked if he knew what it might be. Without trying to alarm anyone, there are times when pilots and controllers discuss something other than the business at hand when there isn’t much business going on at the time. The controller said he’d check into it, and shortly thereafter reported that a test ballistic missile had been launched from Vandenberg AFB, California. On an otherwise unremarkable flight, we were provided us with a “front row” seat to view the event. The images from the current news video appear as if they could have been taken from that evening, and there is no doubt in my mind that it shows the exhaust plume from a ballistic missile. So when I read the official government explanation, that it’s a contrail from an airliner, I know I’m being lied to. Contrails do not begin at the horizon, they don’t climb vertically, and no way do they ever display that much movement at the source.

Okay, so why are we being asked to accept a ludicrous explanation? If it was a U.S. missile test, I wouldn’t expect an announcement in advance, but neither would I think it worthy of a smokescreen of untruth. Secrecy is one thing, but you don’t do something so visible if you want to keep it secret. 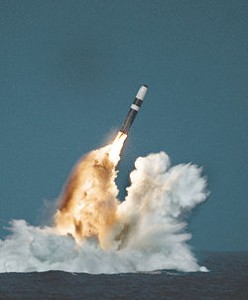 This report presents the opinion of experts that the video documents the firing of a ballistic missile from a Chinese nuclear submarine positioned about 30 miles off the coast of California, and that the event was designed to “fire a warning shot across America’s bow.” Why would they want to do that?

In case you’ve missed it, tensions in Asia involving our relationship with China, Japan, and North and South Korea have recently increased, due in large part to China’s expanding influence on the global stage. Combine this with the fact that the longest war in American history has hijacked our defense budget and deflected attention from other areas of the world in which we are woefully unprepared to act in a leadership role, and a possible reason emerges. Maybe a new bully has come to town.

According to the report, the primary reason the government has hidden behind the “contrail defense” is that this isn’t the first time 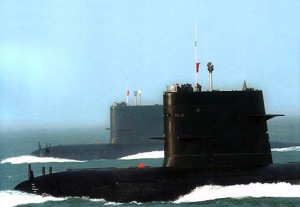 our anti-submarine defense systems have failed to detect underwater penetrations of our security blanket. I don’t know if that’s true or not, but for the life of me I can’t fathom why the official government position is an explanation so ludicrous as to be a joke if it didn’t involve something so serious.

You can check it out for yourself here. Then make up your own mind and see if you might not also wonder, “What the heck is going on?”