Here is a perfect example of why we can’t get any new weapons systems bought for the military in an efficient, timely, and cost-effective manner. From Congressional Quarterly‘s John M. Connelly: 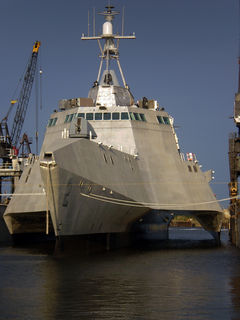 The Littoral Combat Ship, or LCS, is a new vessel designed to fight closer to shore than most U.S. warships. The Navy has worked with two shipyards — Austal USA in Alabama and Marinette Marine in Wisconsin — each of which has delivered one ship and is building another. The Navy is currently authorized to select between the two companies and have the winner build 10 ships, after which another competition would occur.

But in November, service leaders asked Congress to approve within a month a new approach that would keep both companies in business on the program and buy 20 ships in total, after which a new competition might occur. The Navy argued that the prospect of competition has driven down each company’s price and that the proposed new approach will enable the service to buy 20 ships through fiscal 2015 instead of 19 under the current plan.

Last Wednesday, Sen. John McCain, ranking member on the armed services committee, told the Chief of Naval Operations Adm. Gary Roughhead that he could not support the Navy’s revised plan and assailed the Navy’s approach for what he called a pattern of pushing Congress into last-minute decisions on high-priced warships without providing enough information.

McCain: “I would like to comment on how undesirable the process by which the Navy has made this proposal has been — outside of ‘regular order’; during an open competition; in a way that precludes full and open debate by all interested members; and without full information. I respectfully suggest that neither this program nor the Navy’s shipbuilding enterprise have been served well by Congress’ making decisions in this way in the past. I, therefore, respectfully ask that this process not be repeated.” 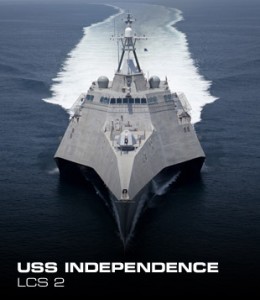 McCain and others are concerned because the Navy’s request on the LCS program represents the third time it has presented Congress with a difficult choice about how to buy the ships relatively late in a session, after budget hearings and often after defense bills have been written. It’s like asking for a decision in the blind. Congress does not know the exact cost of the ships or the contractors’ technical ability to execute the program because the Navy will not provide that information to members, even though it has given them a tight deadline to act.

Leaving the issue of deadlines aside, why do you suppose the Navy hasn’t been forthcoming with the relevant information? Take a look at this priceless (no pun intended) explanation.

The Navy says it has given members as much information as possible, including a range of expected prices, but it cannot share the contractors’ exact prices with members because a competition is still ongoing and the service may still have to select between the contractors if Congress does not approve the two-shipyard plan. The Navy even came up with a catchy alliterative phrase for that information which it cannot share: source-selection sensitive. 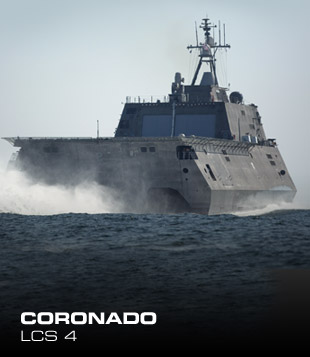 In a report issued the same day, the Government Accountability Office found that the LCS program faces technical risks because designs are not final, and future changes could cause costs to exceed Navy budgets. It should come as no surprise to anyone that the cost per LCS ship already has nearly doubled in value from original projections to about $700 million. The GAO also raised doubts about buying the ships before their capabilities are fully demonstrated. And yet the GAO also joined in the lunacy by pointing out that having two shipyards working the program could provide some insurance if one of the vessels does not work out as planned.

Think about that for a moment. We’ve got two defense contractors building different versions of a warship under a deal that would have provided two each. But now we want to go ahead and increase the order to ten each before either version has proven it can do the job we want it to do, and that’s a good idea in case one of the designs is a bust, and no, we can’t answer all your questions, you know, like how much it’s going to cost, you’ll just have to trust us.

If you think this is a joke and I’m making it up, you’d be wrong.

And, of course, while McCain is questioning the Navy’s approach to requesting a change to the LCS program, Sen. Mary L Landrieu, D-La., has filed an amendment to the defense authorization bill that would provide the Navy the congressional approval it seeks. Maybe that’s because she knows both versions of the warship will be effective in combat and we need them. Or maybe it’s because Louisiana is still reeling from news that Northrop Grumman Corp. plans to close its Avondale shipyard near New Orleans, one LCS model would be built in Alabama, and many of Landrieu’s constituents would work there. Well, duh.

Landrieu: “I am working closely with the Navy to protect and enhance the shipbuilding industry on the Gulf Coast. I will continue to work with my colleagues from the Gulf Coast delegation as well as Navy on a strategy to increase the Navy’s force structure, save tax payer dollars, and bolster this vital Gulf Coast industry.” 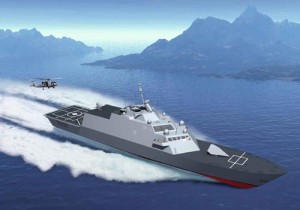 And it just so happens that the Navy could see its authorization become law via several routes. The House-passed continuing resolution, which would fund the entire government through the end of fiscal 2011, contains a provision authorizing the Navy’s new plan. Senate appropriators also have drafted an omnibus spending measure combining fiscal 2011 spending bills. The Senate could still take it up in place of the continuing resolution, which would fund the whole government at fiscal 2010 levels except as otherwise stated. A senior Senate aide confirmed Thursday that the omnibus package also contains an authorization for the Navy’s dual-shipyard strategy.

So it’s business as usual, it seems, even in the face of financial meltdown under the glaring spotlight of a staggering deficit. The only cool spot amid this lunacy is that McCain poses a formidable obstacle to the Navy’s goal. McCain: “Thus, without the basic information needed to make an informed decision on the Navy’s proposal — and without the benefit of thoughtful and transparent oversight — I cannot support the Navy’s proposal at this time.”

I hope Sen. Landrieu will excuse me, but I think Sen. McCain has a much better idea.