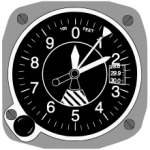 Aviators have sayings that encapsulate some of the lessons it seems each pilot has to learn through personal experience before the wisdom takes hold. One of the classics is, “The three most useless things a pilot can have are the altitude above, the airspeed not on the indicator, and the fuel not loaded before takeoff.”

in poor weather that might give rise to a saying something like: “Always make certain your life insurance is up to date before ‘taking a look’.” A recent article in AVweb by David Kenny describes the events leading up to the tragedy. What follows is based on Kenny’s article and edited for brevity and content where necessary for publication to a wider audience. 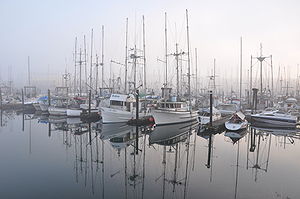 The hazards of winter flying aren’t limited to in-flight icing and slippery runways. In warm, moist regions like the Gulf Coast, fog becomes more likely in the cooler months as overnight temperatures drop toward dew points that stay relatively high. It can come up quickly, spread for miles, be impenetrable at the water’s edge but nonexistent 10 miles inland. Pilots flying into coastal airports at night need to stay sharp and flexible, ready to divert if conditions unexpectedly deteriorate.

At approximately 6:00 p.m. on December 10, 2009, a Piper PA-30 Twin Comanche departed from a private field in the Texas Panhandle en route to the Charles R. Johnson Airport in Port Mansfield, Texas, a non-towered field with no weather reporting facilities and no charted instrument approaches. In other words, the pilot would be on his own in terms of assessing the weather and navigating to the destination airfield at night.

The weather at the time of departure was VMC (visual meteorological conditions), and forecast to be good enough on the coast to permit a visual approach to landing. The pilot did not file a flight plan (often erroneously thought of by non-flyers as tantamount to suicide), but he later obtained an IFR (instrument flight rules) flight plan en route, which allowed him to safely and legally fly in the clouds. He had accumulated an impressive number of flight hours and obtained multiple instructor ratings within the 18 months since his first flight as a student. His logbook indicated he was current and qualified for the flight profile as planned. 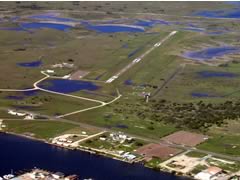 Initial contact with Valley Approach Control was made descending through 6,500 feet for 6,000 feet. After confirming that Port Mansfield had no instrument approaches, the pilot mentioned his four-hour flight and said that “everything I’ve pre-flight planned showed it to have twenty-five hundred foot ceilings when we were getting there.” (To base decisions on a four-hour-old weather report is not prudent.) He asked if he could “proceed down to two thousand and take a look.” The controller cleared him to descend to 2,000 feet at pilot’s discretion and fly directly to the field.

Based on other information available at the time, this wasn’t unreasonable. A commercial flight about 16 miles to the southeast reported the cloud bases at 2,300 feet, and Brownsville, 45 miles to the south, was also reporting a 2,300-foot overcast, not the best of weather conditions but adequate for a visual approach. But at Harlingen, 27 miles from Port Mansfield and further inland, the overcast layer was solid at 1,200 feet, only 200 feet above the legal minimum ceiling for VFR flight and well below a common-sense limit.

The controller cleared the Twin Comanche to descend and maintain 1,600 feet and report the field in sight. As the airplane descended, radio contact became sporadic. The controller advised that the airport was at 12 o’clock and nine miles, then eight, then six. After a broken transmission suggested the pilot had located the field, the controller asked him to “squawk ident if you see the airport.” Thirteen seconds later, the controller confirmed “ident observed” and cleared him for the visual approach. (This exchange used the airplane’s transponder as a substitute for radio communication, a not-uncommon practice under certain circumstances.)

To orient yourself to what’s about to happen, the pilot is planning to land to the northwest (from left to right on the diagram above, which isn’t compass oriented), but he’s approaching the airport from the northwest and will have to fly a “circling” approach as opposed to a “straight-in.” As he arrives at the field, he’s west of the runway, headed southeast, with the runway off his left side *the DOWNWIND airplane), and he will have to make a 180-degree left turn to line up with the runway and land. According to radar-track data the airplane descended to 800 feet as it passed west of the field, then made a left turn and descended through 600 feet before it was lost to radar (this would have been at approximately the position of the BASE airplane).

A commercial fisherman in the channel that night described the weather as “very foggy,” with visibility of 1/2 mile (well below the adequate minimum for visual flight). A witness who lives near the airport said the noise of the engines woke him from a sound sleep. He was unable to see the airplane after he went outside, but could hear it near “the edge of the water” and thought the pilot was “looking for the runway.” He estimated visibility at 350 yards (1/5 mile). 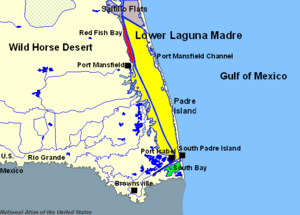 About 10:20 p.m. that evening, the Twin Comanche crashed into the Laguna Madre, the narrow (in yellow) body of water separating the Texas mainland from South Padre Island. The airplane was destroyed and both men on board were killed. Examination of the wreckage suggested the airplane hit the water in a shallow descent with the wings level and both engines at reduced power settings. The gear and flaps were extended. This evidence indicates a normal condition for the airplane at that point in the approach.

Airlines set relatively high weather minimums for circling approaches, and many corporate and charter operators do likewise. Trying to keep the runway in sight in poor visibility at low altitude pulls the pilot’s attention away from the instruments just when the margin for error in attitude and airspeed is dwindling to zero. It isn’t clear whether the pilot ever saw the runway, or mistook other lights in the vicinity for the airport beacon. It does seem likely that keeping the runway in sight while flying a tight traffic pattern in low visibility at night was a lot to ask of even a more experienced pilot, and a decision to divert would have been well-advised. Multiple straight-in approach procedures were available into Harlingen, where the visibility was reported to be 10 miles beneath the overcast.

Aviators love acronyms, and we have one to describe this crash: CFIT (controlled flight into terrain).

Unfortunately, we also have a cause: pilot error.