You gotta love this one. 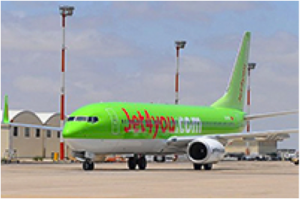 According to AVweb, last Saturday the captain of a Moroccan Jet4You flight lost control of his airliner to 137 passengers who banned together to send him and the airline a message: “Hell no, we won’t go.”

Who would blame them? They’d bought tickets for a 90-minute direct flight from Toulouse to Casablanca. But as they were settling in, the captain announced a couple of detours to pick up some stranded passengers: north to Lyon, then back south to Bordeaux, an impromptu Tour de France that would add about four hours to the flight.

It turns out that in addition to seatbacks and tray tables, seatbelts are one of the few things passengers can control on an airliner. Leave them unbuckled, and the captain by regulation can’t move the jet. But he can retaliate, which he did by turning out the lights, turning off the heat, and departing the airplane. Take that, you rebellious scum! Or, “Prenez que vous écume rebelle!”

Eventually, 57 disgruntled folks gave up the protest and entered the terminal. The rest sat on the cold, dark airliner overnight. At 6 p.m. the following day, they finally got the direct flight they demanded.

It appears that when traveling by air in that part of the world, to fly from Toulouse to Casablanca you have three choices: direct in 90 minutes, with two stops in 5.5 hours, or you can take advantage of the frequent protester program and receive extremely uncomfortable overnight accommodations at no extra charge for a total enroute time of about 36 hours.

The good news is that you can probably avoid a middle seat.