Prior to our first flights in the T-37, we had already spent many hours in the classroom. As described in a previous post titled, “Split Schedules,” academics would continue in conjunction with flight training to cover in detail subjects like aviation physiology (including altitude chamber rides), ejection seat and emergency egress training, parachute landing falls, aircraft systems, basic instruments, mission planning, navigation, and aviation weather.

Following our “Dollar Rides,” the Contact phase of USAF Undergraduate Pilot Training began in earnest. A description of this phase in the current UPT syllabus follows:

“Here you will learn the fundamentals of flight under Visual Flight Rules (VFR). You will practice take offs, landings, and touch-and-goes. You will build your confidence as you perfect these maneuvers.  Landings are done in the military overhead traffic pattern – distinctly different than civilian traffic patterns. Also, you will be practicing simulated emergency procedures including no flap landings, engine-out, and forced landing procedures. You will enter and recover from the (practice) spin maneuver on most of your Contact sorties as well in order to perfect your response in the event that you find yourself actually entering a spin. You will start all your contact work with a G-Awareness Exercise (G-Ex) that tests your G-tolerance that day, and gets you warmed up. In the working areas, you will perform stalls, spins, and recoveries from both.”

With the Dollar Rides out of the way, the time had come for each of us to prove whether we could meet the standards, and we lived under the threat of a dreaded “pink slip” on every flight.

Flying an airplane well requires a unique combination of academic knowledge and motor skills. In-depth understanding of the principles of aerodynamics, effects of controls, aircraft systems, procedures, and techniques is only the starting point from which the pilot’s brain and eye-hand coordination must communicate to put the aircraft at a specific point in three-dimensional space predictably and repeatedly. It probably goes without saying that while being alert is an attribute when learning to fly, nervousness can cause problems. Here is an example of how one of my classmates allowed the jitters to get the best of him.

Lt. B seemed like he’d been born with a healthy dose of confidence, and I think we all figured he would take everything in stride without so much as a hiccup. Overall he did, but early on he provided the rest of the class with a bit of breathing room.

The external preflight inspection is the first test of an airplane’s ability to fly safely. After a preflight demo by the instructor on the Dollar Ride, all preflights were performed by a student and supervised by an instructor until the student had been signed off on preflights. It was sort of like the first acknowledgement that you weren’t a total doofus and could at least do that by yourself.

It seemed that instructors could complete a preflight inspection in the time it took us to open the checklist. We knew how bored and impatient they were, but to rush and miss something might mean a dreaded pink slip. So we endured their “hovering” close by, went step by step, and dreamed of day we would be rid of their nit-picking for at least that short period of time.

Once we had been graded competent in preflights, instructors typically arrived at the airplane a few minutes before start-engine time. They expected us to be strapped in, with the pre-start checklist performed. That’s because they didn’t want to wait for us to strap in, either, which in their eyes took forever.

On this special occasion, Lt. B was sitting in the cockpit with his helmet on, ready and eager. His instructor, Capt. C, walked up and stopped about ten feet from the aircraft. “Lt. B!”

“Is that T-37 aircraft ready for start?”

“You’re sure about that?”

“Absolutely, sir. If you’ll go ahead and strap in, I’ll crank ‘er up.” 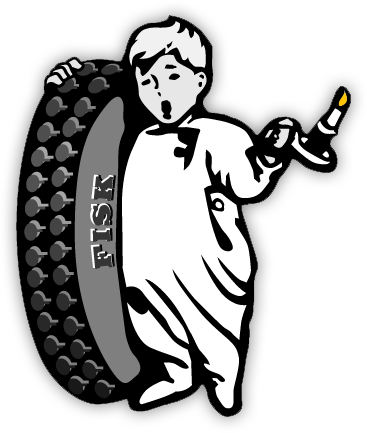 As relayed to us by none other than Lt. B after the fact, Capt. C lowered his head, shook it a few times, then said, “Lt. B, get your skinny butt out of that T-37 and come here.”

“You’re absolutely right for a change. Now climb out of there.”

Lt. B did, reported to Capt. C and stood at attention, his back to the airplane until Capt. C ordered him to do an about-face. Now he was standing in front of the captain, who came up close behind him and said, “Tell me you see that.”

“That flat tire, you dunce.”

In addition to the pink slip, Lt. B was awarded a dubious honor. Everywhere he went on the base for the next two days, he had to wear a dunce hat and carry that flat tire in one hand and a candle-holder with a candle in the other hand. The Fisk Tire Boy had come to Texas.

We smiled a lot and thanked him for providing a diversion.