I just read an article on AVweb about the actions and subsequent words of Sen. James Inhofe (R-Okla.). I don’t know anything about the man, but I am absolutely convinced that as a pilot his most important role is to serve as the quintessential example of how to act like an idiot both in and out of the cockpit.

The Federal Aviation Administration (FAA) through the Federal Aviation Regulations (FARs) holds pilots accountable for any and all actions taken (or not taken, as the case may be) with regard to exercising the privileges of a pilot certificate.

The language is very clear: “The pilot in command of an aircraft is directly responsible for, and is the final authority as to, the operation of that aircraft.” As for flight preparation, the FARs state, “Each pilot in command shall, before beginning a flight, become familiar with all available information regarding that flight.” At a bare minimum, even the most inexperienced student pilot knows to check Notices to Airmen (NOTAMs), which inform pilots of any abnormal or unusual conditions affecting the departure, en route, or arrival portions of the flight. 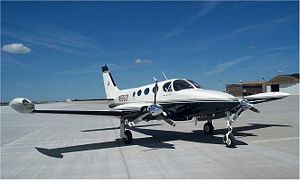 Imagine my reaction, then, to read that on October 21, 2010, Inhofe landed a twin-engine Cessna 340 on an occupied, closed runway at Port Isabel-Cameron County Airport, Texas. The runway had been marked with oversized painted Xs (the standard visual cue to indicate a closed runway), and was occupied by a large red truck, other vehicles, and construction workers. The workers were using loud equipment at the time and were not aware of the approaching plane, so a person had to run out to warn them. A supervisor immediately reported the incident to the FAA and told reporters he was “still shaking” when he reached the hangar to confront the pilot. I don’t doubt it.

Inhofe’s unsafe and irresponsible actions are astonishing enough, but his subsequent behavior is almost beyond belief. He said he didn’t see the Xs until late on final approach and was concerned that he might not be able to reject the landing safely. If he thinks what he did was safer than a go-around, he’s even dumber than he appears. And to deflect criticism with the statement that he landed “well off to the side” is further indication of distorted mental capacity.

And get this: a few days after his unorthodox arrival, Inhofe notified “an airport official” of his intent (as if that makes this okay) and used a taxiway for departure. I guess he slept through the part of pilot training when they tell you that runways are for takeoffs and landings and taxiways are . . . well . . . for taxiing. And as you might have guessed by now, the lunacy doesn’t stop there.

The senator has since spoken with FAA investigators and will “just wait and see what happens.” That, of course, hasn’t stopped him from offering reporters an explanation that would be outrageously funny if it weren’t so ridiculous.

Inhofe said he was unaware of the runway closure because of “a bad relationship” he has with one individual who declined to take his phone calls before the flight and did not tell him about the NOTAM. Inhofe reportedly said an airport official “hates me, I don’t know why.” (Just to set the record straight for non-pilots, the FAA makes NOTAMs easy to get. No person can prevent you from checking them and fulfilling your responsibilities as pilot in command.)

And not only that, but the fool keeps opening his mouth and showcasing his abject failure to grasp the nature and quality of his responsibilities as a pilot. He said he won’t guarantee he’ll be more vigilant about checking NOTAMs in the future. “People who fly a lot just don’t do it,” and, “I won’t make any commitments.” Inhofe added that while “technically” pilots should “probably” check NOTAMs, it would be impractical for him to do so on the many flights he makes to small airports in Oklahoma each year. All of these statements are absurd in the extreme.

As any pilot might have guessed, Inhofe has experienced at least two other publicized incidents: in 1999 he made an emergency landing when his aircraft lost a propeller (most likely the result of mechanical failure and probably not his fault), and in 2006 he ground-looped (lost control of) a Van’s RV-8 (without question his fault).

For pilots and non-pilots alike, this is just another example of how the seductive power of political office can create an unbelievable arrogance and pompous attitude of privilege.

I guess the rules don’t apply to Sen. James Inhofe, and he doesn’t care who knows it.