On September 22, 2010, Paul Bertorelli of AVweb posted a blog about an incident in the traffic pattern at his home field. The basic facts: non-towered airport with a single runway (04/22), inoperative automated weather system, voluntary noise abatement procedure requesting use of runway 22 in calm winds (defined as less than 5 knots), and nearby local weather stations reporting winds at 060 between 7 to 13 knots.

Paul was flying with a student in the traffic pattern for landing practice in a Piper Cub with no radio. His choice of runway 04 was dictated by the winds, and the published noise abatement procedures did not apply. At one point on the downwind leg, a Piper Cherokee flew past them about a quarter mile away. After the flight, as Paul and his student were pushing the Cub into the hangar, the Cherokee taxied up and stopped in front of the hangar.

The pilot remained civil, but “launched into an inquisition” about Paul’s lack of a radio. When Paul explained that he was working out problems with radio capability in the Cub, the other pilot admitted that the real issue for him was the noise abatement policy and lack of a working automated weather broadcast to provide him with the existing wind direction and speed. He had used the policy as the controlling decision factor for using runway 22 and complained that the resulting near head-on collision was the closest call of his life. Paul reports that they didn’t come even remotely close to head-on, and he discusses this situation in detail. 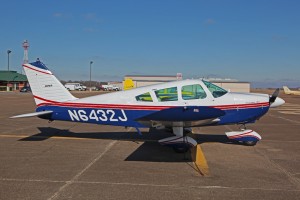 First and foremost, the pilot of the Cherokee could have used his eyeballs to note the most obvious and accurate indication of the wind at the airfield as “reported” by the windsock. To land with a quartering left tailwind of 9-13 knots and sacrifice a safety margin in exchange for a voluntary good neighbor policy that doesn’t even apply under the existing conditions is far from good judgment. The Cherokee pilot had no business in confronting Paul about his choice of runway and did nothing but act the part of the airport idiot in the process.

Paul goes on to cover in further detail how he has to adjust traffic patterns to account for the relatively meager climb performance of the 65-horsepower Cub. He can’t follow the noise abatement procedures as published even when the winds allow him to use runway 22. To reach the minimum altitude requested of 700 feet before making any turns, he would have to fly directly over the sensitive neighborhood at 300 feet and wouldn’t be able to make any turns until 2 miles later. Paul’s solution is to recognize that some of the policies and procedures pilots are asked to follow are not “one size fits all.” He turns early and flies a 200-foot crosswind leg to the downwind.

Flying an airplane without an operating radio, even when he is perfectly legal in doing so under the circumstances, is another issue entirely. Paul admits at the end of the post that his “old school” attitude needs adjustment. Even more interesting than Paul’s blog are the comments from pilots. I didn’t count them, but I’m guessing 40 or more cover every possible aspect of the incident as reported by Paul. Pilots as a group are probably more opinionated than non-pilots, and that’s never more true than when the topic has anything to do with aviation.

The comments included verbatim quotes from the Federal Aviation Regulations and Airman’s Information Manual about traffic patterns, radio use, deviations from standard procedures, and the safety issues inherent in operating in close proximity to other airplanes without being able to communicate.

“See and avoid” always has to be the final safety net, but the combination of flying a vastly different traffic pattern than other airplanes and not being able to advise other pilots of what you are doing probably stretches the basic concept of good judgment. As Jeff Goldblum’s character in Jurassic Park tells the scientist who cloned dinosaur DNA, “Once you discovered you could do it, you never stopped to consider whether you should.”

Another aspect of the comments surprised me. A few pilots allowed their discussion to drift off topic into the question of why airplanes fly: Newton, Bernoulli, or Newton and Bernoulli. Ignoring the fact that this has nothing to do with Paul’s blog, I like the explanation offered by an A-4 pilot years ago as reported in an official  US Navy safety magazine.

The lead ship in a flight of three A-4’s aborted his takeoff with a blown tire. The #2 ship had to abort with an engine fire. When cleared for takeoff, the pilot of the #3 ship declined the offer and requested permission to taxi back to the parking ramp. When the tower asked if he had a problem, the pilot replied, “No, there just don’t appear to be any ‘lifties’ in the air today.”

Aha. Lifties make airplanes fly. In my book, that’s as good an explanation as any.

One Response to Rules To Ignore