Within a few days of  returning to our base in Florida we were abruptly told to pack our things. After just three weeks of practice, we were on our way. This was it. It was time to  go. It was the middle of March 1942, and I was 30 years old. Our orders were to fly to McClelland Air Base in Sacramento, California on our own, at the lowest  possible level. So here we went on our way west, scraping the tree tops at 160 miles per hour, and skimming along just 50 feet above plowed fields.

We crossed North Texas and then the panhandle, scaring the dickens out of livestock, buzzing farm houses and many a barn along the way. Over the Rocky Mountains and across the Mojave Desert dodging thunderstorms, we enjoyed the flight immensely and although tempted, I didn’t do too much dare-devil stuff. We didn’t know it at the time, but it was good practice for what lay ahead. It proved to be our last fling.

Once we arrived in Sacramento, the mechanics went over our plane with a fine-toothed comb. Of the twenty-two planes that made it, only those whose pilots reported no mechanical  problems were allowed to go on. The others were shunted  aside.   After having our plane serviced, we flew on to Alameda Naval Air Station in Oakland. As I came in for final approach, we saw it! I excitedly called the rest of the crew to take a look.

There below us was a huge aircraft carrier. It was the USS Hornet, and it looked so gigantic! Man, I had never even seen a carrier until this moment. There were already two B-25s parked on the flight deck. Now we knew! My heart was racing, and I thought about how puny my plane would look on board this mighty ship.

As soon as we landed and taxied off the runway, a Jeep pulled in front of me with a big “Follow Me” sign on the back. We followed it straight up  to the wharf, alongside the towering Hornet. All five of  us were looking up and just in awe, scarcely believing  the size of this thing.

As  we left the plane, there was already a Navy work crew swarming around attaching cables to the lifting rings on top of the wings and the fuselage. As we walked towards our quarters, I looked back and saw them lifting my plane up into the air and swing it over the ship’s deck. It looked so small and lonely.   Later that afternoon, all crews met with Colonel Doolittle and he gave last-minute assignments. He told me to go to the  Presidio and pick up two hundred extra “C” rations. I saluted, turned, and left, not having any idea where the Presidio was, and not exactly sure what a “C” ration was. I commandeered a Navy staff car and told the driver  to take me to the Presidio, and he did. On the way over, I realized that I had no written signed orders and that this might get a little sticky. So I walked into the Army supply depot and made my request trying to look poised and confident. The supply officer asked, “What is  your authorization for this request, sir?”

I told him that I could not give him one.

“And  what is the destination?” he asked.

I answered, “The aircraft carrier Hornet, docked at Alameda.”

He said, “Can you tell me who ordered the rations, sir?”

The supply officer huddled together with a few other men, talking and glancing back towards me. Then he walked back over and assured me that the rations would be delivered that afternoon. Guess they figured that something big was up. They were right. The next morning we all boarded the ship.   Trying  to remember my naval etiquette, I saluted the Officer of  the Deck and said, “Lt. McElroy requesting permission to  come aboard.”

The officer returned the salute and said, “Permission granted.” 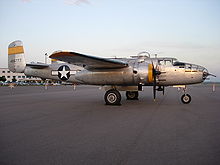 Then I turned aft and saluted the flag. I made it without messing up. It was April 2, and in full sunlight, we left San Francisco Bay. The whole task force of ships, two cruisers, four destroyers, and a fleet oiler, moved slowly with us under the Golden Gate Bridge. Thousands of people looked on. Many stopped  their cars on the bridge and waved to us as we passed underneath. I thought to myself, I hope there  aren’t any spies up there waving.

Once at sea, Doolittle called us together. “Only a few of you know our destination, and you others have guessed about various targets. Gentlemen, your target is Japan!” A  sudden cheer exploded among the men.
“Specifically, Yokohama, Tokyo, Nagoya, Kobe, Nagasaki and Osaka. The Navy task force will get us as close as possible and we’ll launch our planes. We will hit our targets and proceed to airfields in China.” 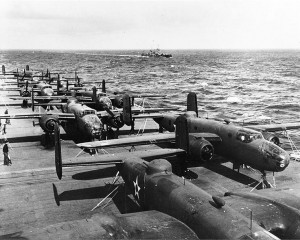 After the cheering  stopped, he asked again if any of us desired to back out, no questions asked. Not one did, not one. Then the ship’s Captain went over the intercom to the whole ship’s company. The loudspeaker blared, “The destination is Tokyo!”

A tremendous cheer broke out from everyone on board. I could hear metal banging together and wild screams from down below decks. It was quite a rush! I felt relieved actually. We finally knew where  we were going.