Posted on September 9, 2010 by Tosh McIntosh

Darrell Bryant, a friend and fellow writer, sent this to me. I cannot read it and shove it in an electronic folder to be forgotten, so I’m going to share it as a Visitor’s Story to honor the aviator who wrote it.

It’s over 7000 words. I’ve separated it into parts for publication in this blog, and I hope that those of you who care to join me in offering a belated “Godspeed” to men like Mac McElroy will check back often to read the entire account of a moment in time when a small group of valiant young men stood up to be counted in the battle against worldwide tyranny and oppression.

My name is Edgar McElroy. My friends call me “Mac.” I was born and raised  in Ennis, Texas, the youngest of five children, son of Harry and Jennie  McElroy. Folks say that I was the quiet one. We lived at 609 North  Dallas Street and attended the Presbyterian Church.

My dad had an auto mechanic’s shop downtown close to the main fire station.  My family was a hard working bunch, and I was expected to work at Dad’s  garage after school and on Saturdays, so I grew up in an atmosphere of  machinery, oil and grease. Occasionally I would hear a lone plane fly over,  and would run out in the street and strain my eyes against the sun to  watch it. Someday, that would be me up there!

I really liked cars, and I was always busy on some project. It wasn’t  long before I decided to build my very own Model-T out of spare parts. I  got an engine from over here, a frame from over there, and wheels from  someplace else, using only the good parts from old cars that were otherwise  shot. It wasn’t very pretty, but it was all mine. I enjoyed driving on the  dirt roads around town and the feeling of freedom and speed. That car of  mine could really go fast: 40 miles per hour!

In high school I played football and tennis, and was good enough at  football to receive an athletic scholarship at Trinity University in  Waxahachie. I have to admit that sometimes I daydreamed in class, and often times I thought about flying my very own airplane and being up there in the  clouds. That is when I decided to take a correspondence course in  aircraft engines.

Whenever I got the chance, I would take my girl on a date up to Love Field  in Dallas. We would watch the airplanes and listen to those mighty piston  engines roar. I just loved it and if she didn’t, well that was just too  bad.

After my  schooling, I operated a filling station with my brother, then  drove a bus, and later had a job as a machinist in Longview. But I never  lost my love of airplanes and my dream of flying. With what was going on in  Europe and in Asia, I figured that our country would be drawn into war  someday, so I decided to join the Army Air Corps in November of 1940. This  way I could finally follow my dream.

I reported for primary training in California. The training was rigorous  and frustrating at times. We trained at airfields all over California. It  was tough going, and many of the guys washed out. When I finally saw that I  was going to make it, I wrote  to my girl back in Longview, Texas. Her  name was Agnes Gill. I asked her to come out to California for my  graduation. And oh, yeah, also to marry me. 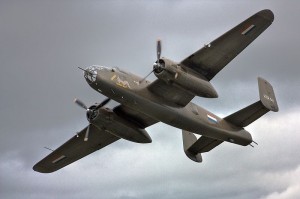 I graduated on July 11, 1941. I was now a real, honest-to-goodness Army  Air Corps pilot. Two days later, I married “Aggie” in Reno, Nevada. We  were starting a new life together and were very happy. I received my  orders to report to Pendleton, Oregon and join the 17th Bomb Group.  Neither of us had traveled much before, and the drive north through the  Cascade Range of the Sierra Nevadas was interesting and beautiful.

It was an exciting time for us. My unit was the first to receive the new  B-25 medium bomber. When I saw it for the first time I was in awe. It  looked so huge. It was so sleek and powerful. The guys started calling it  the “rocket plane,” and I could hardly wait to get my hands on it. I told  Aggie that it was really something! Reminded me of a big old scorpion, just  ready to sting!  Man, I could barely wait!

We were transferred to another airfield in Washington State, where we  spent a lot of time flying practice missions and attacking imaginary  targets. Then, there were other assignments in Mississippi and Georgia,  for more  maneuvers and more practice.

We  were on our way back to California on December 7th when we got word of  a Japanese attack on Pearl Harbor. We  listened with mixed emotions to the  announcements on the radio, and the next day to the declaration of war.

What the President said, it just rang over and over in my  head. “With  confidence in our armed forces, with the un-bounding determination of our  people, we will gain the inevitable triumph. So help us God.” By gosh, I  felt as though he was talking straight to me! I didn’t know what would  happen to us, but we all knew that we would be going somewhere now.

The first weeks of the war, we were back in Oregon flying patrols at sea  looking for possible Japanese submarines. We had to be up at 0330 hours to  warm up the engines of our planes. There was 18 inches of snow on the  ground, and it was so cold that our engine oil congealed overnight. We  placed big tarps over the engines that reached down to the ground. Inside  this tent we used plumber’s blow torches to thaw out the engines. I figured  that my dad would be proud of me if he could see me inside this tent with  all this machinery, oil and grease. After about an hour of this, the engines were warm enough to  start.

We flew patrols over the coasts of Oregon and Washington from dawn until  dusk. Once I thought I spotted a sub and started my bomb run, even had my  bomb doors open, but I pulled out of it when I realized that it was just a  big whale. Lucky for me, I would have never heard the end of that!

Actually, it was lucky for us the Japanese didn’t attack the West  Coast, because we just didn’t have a strong enough force to beat them off.  Our country was in a real fix now, and overall things looked pretty bleak  to most folks. In early February, we were ordered to report  to Columbus,  South Carolina. Man, this Air Corps sure moves a fellow around a lot!  Little did I know what was coming next!