This morning’s Statesman included an article with more details of the search and rescue operation in Alaska reference the crash of a DHC-3T Otter. As is often the case, this  media report includes information that didn’t pass through the filter of knowledgeable review before publication. I’m referring to mention of ADS-B, or Aircraft Dependent Surveillance Broadcast.

Ever since the development of radar technology during WWII, air traffic control systems throughout the world have relied on the ability of radar to “paint” an aircraft, determine its position, and direct it in relation to geographical features, weather, and other aircraft. A corollary system known as IFF, or Identification Friend or Foe, uses a “transponder ” on board the aircraft to enhance the raw radar return on the controller’s scope and “tag” the return as belonging to a specific aircraft. Without addressing all the limitations of radar as the basis for controlling airplanes, suffice it to say that new technology offers significant improvements.

ADS-B is the future.  An ADS-B-equipped aircraft determines its own position using a global navigation satellite system and periodically broadcasts this position and other relevant information to potential ground stations and other aircraft with ADS-B equipment. Australia currently has the only fully operable ADS-B system.

To mention ADS-B in the article and the fact that it’s not yet in operation in the US would seem to indicate that it might have had some bearing on the accident. Again with my standard disclaimer that I am not investigating from my writing desk, I suggest there is no connection between what we know of the accident so far and ADS-B. 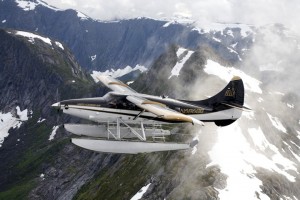 Throughout a large portion of the US, I can legally and safely fly an airplane without talking to anyone. Nor do I always have to have a transponder in my airplane. I’m not aware of the specific requirements in the area of this crash, but information in this morning’s article indicates that the accident aircraft was not in contact with Air Traffic Control (ATC).

They left a lodge at about 3:00 pm for a fishing camp. The lodge called the camp three hours later to inquire when the party would be returning for dinner and were told they had never shown up. That’s a telling detail, because if ATC had been in radio and radar contact with the pilot, the sudden loss of communications and the radar return on the scope would have alerted the controller that something was wrong. Search and rescue would more than likely have been initiated much sooner than three hours after the crash.

What difference would ADS-B have made? The first consideration is how information is passed between the aircraft and ATC. Currently, both radio and radar require line-of-sight. The controller can’t maintain contact with an airplane on the other side of a mountain, deep in a valley, or in most cases, when flying at low altitudes even in relatively flat terrain.

But the position of an aircraft with ADS-B is detected by satellite and reliably passed to ATC and other ADS-B equipped airplanes without regard to terrain. Had that been the case at the time of this accident, but the aircraft hadn’t established radio contact with ATC, the controller wouldn’t have been paying any attention to a single airplane not in radio contact. He’s busy enough dealing with the airplanes on his frequency.

There is another question that hasn’t been addressed in the news reports. An

Emergency Locator Transmitter (ELT) is designed to detect sudden deceleration forces typical of those associated with an airplane crash. If armed, the transmitter begins sending out an emergency signal over a standard frequency dedicated to that purpose. If picked up by ATC or other airplanes, it can be used for homing in on the signal. Older ELT systems required line of sight like any radio signal, but new developments allow satellites to pick it up and pinpoint the exact position of the source. Could instant notification of the crash and rapid response have saved anyone? I’ve read nothing to indicate that the ADS-B system includes ELT capability.

In my opinion, this is a key question in the aftermath of this tragedy. Why didn’t current capability alert anyone of the crash?