We complete the six-part series to showcase some of the finest examples of art depicting events of the WWII air war. I discovered the original images in a gorgeous slide show created by a good friend and fellow fighter pilot, Yago F. de Bobadilla, who rose to the rank of Major General in the Spanish Air Force. 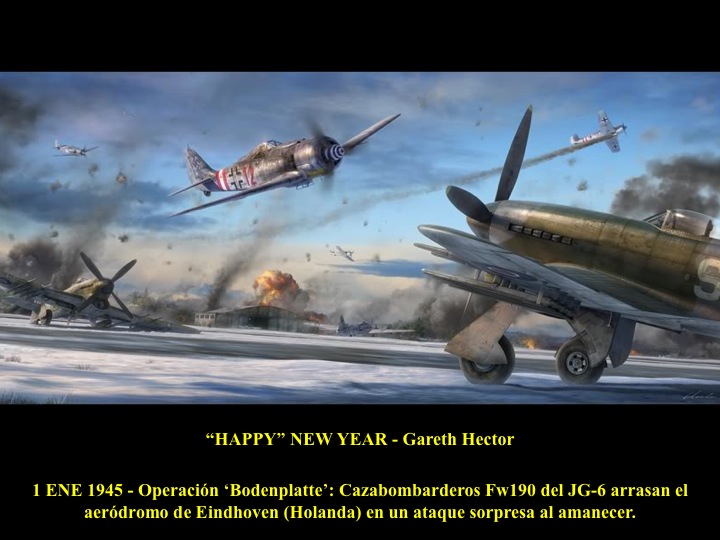 January 1st 1945. All across western Europe airfields are thrown into chaos as the Luftwaffe unleashes a desperate surprise offensive to destroy allied air power on the ground. “Operation Bodenplatte” would instead result in the death knell for the once formidable German Air Force.

There were some successes, however. Eindhoven, the home of the RAF’s 2nd TAF was hit hard, first by Jg-3 and then in a case of mistaken identity by Jg-6. It was the latter strike the artist wanted to show. The airfield is already burning from the first attack when Jg-6’s 1st Gruppe race across the airfield causing even more damage. Red “12” belonged to Ewald Trost, and he was luckier than most as his aircraft was shot down, but he survived and was taken prisoner. Ironically, the 1st Gruppe was to enjoy the most success for Jg-6 that day. The rest of the unit couldn’t find their designated target at Volkel, and as a result found themselves simply trying to stay alive and get home. 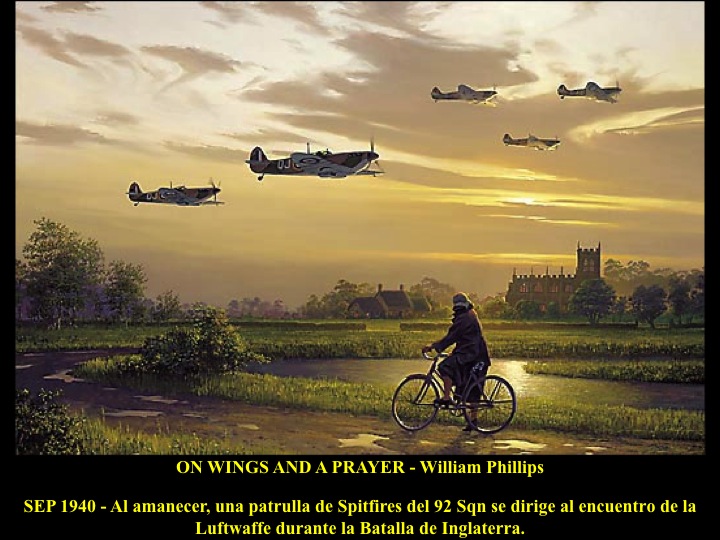 Dawn breaks over the English countryside. This is the summer of 1940, and the island nation is in the grips of war–the Battle of Britain. A woman riding her bicycle, hearing the roar of approaching aircraft, stops to gaze upward. She watches Spitfires from 92 Squadron streak across the sky, determined to search out and destroy the fighters and bombers of Hitler’s Luftwaffe. Silently the woman offers up a prayer.

This painting has no English description, but you don’t have to read Spanish to understand the significance of the date. Above the largest seaborne invasion in the history of warfare, a P-47D holds an escort position on a twin-engine transport stricken by anti-aircraft fire. The Thunderbolt’s mission is to protect the transport from airborne attack, so all the pilot can do is keep German fighters at bay and prevent further damage. The fire is probably fatal, but some or all of the crew might be able to abandon the aircraft successfully.

Within two days of the D-Day Normandy invasion, on 8 June 1944, Commander of US Air Forces in Europe, General Carl Spaatz, ordered a massive new offensive to halt the supply of oil to the enemy forces. As top priority, his bombers would henceforth concentrate their attacks on Germany’s refineries. Those in range of air bases in England would feel the full force of the Eighth Air Force, while the installations further south in Romania, Hungary, and southern Germany would be attacked by bombers of the Fifteenth Air Force based in Italy. To add to the pressure, RAF Bomber Command was coordinated to attack the refineries in the Rühr by night.

As the huge mass of American bombers streamed into the daylight skies, the Luftwaffe quickly changed tactics to counter the potentially devastating threat with a new specialist tactic- the Sturmgruppe. Flying their redesigned and heavily armoured Sturmböcke Focke Wulf Fw190 A-8 heavy fighters, pilots of the newly formed IV Sturm/JG3 Gruppe were urgently assigned the task of attacking the vast bomber streams in an effort to protect the refineries. Escorted into battle by Messerschmitt Me109s to hold off any escorting American fighters, The Focke Wulf Fw190 tactic was to make en-masse lightning attacks on carefully selected targets. With the American bomber formations spread over miles of sky, the Sturmgruppe aimed for the less-well-defended center of the stream, attacking from the rear with concentrated cannon fire. The pilots of IV Sturm /JG3 swore an oath to press home their attacks at the closest possible range, even ramming their targets if necessary to ensure a kill. These desperate tactics were to inflict considerable damage to the allied bomber offensive during the final year of the war.

Richard Taylor’s exciting new limited edition captures the scene: Closing at high speed with all cannons blazing. Unteroffizier Willi Maximowitz is seen flying his distinctive “Black 8” with IV Sturm/JG3 as he dives in to attack a formation of USAAF B-24 Liberators from the 93rd Bomb Group. The American gunners have a frightening task on their hands to fend off the attack until help arrives.

A Luftwaffe Junkers Ju88 bomber on a strike over the Tunisian desert of North Africa. 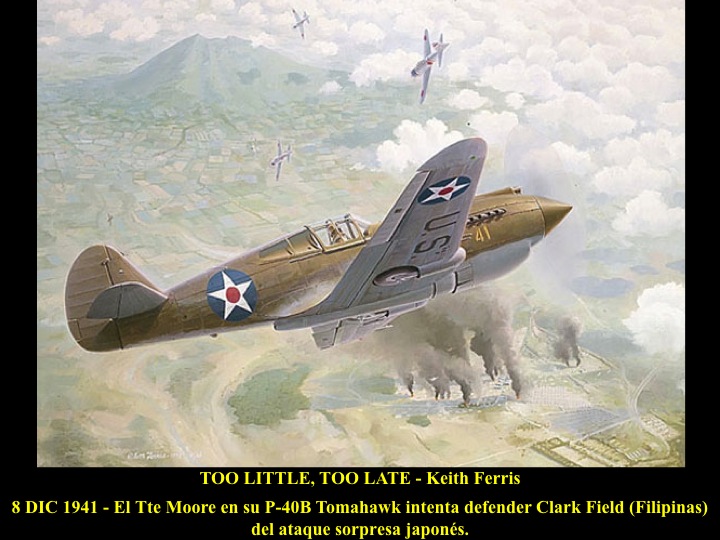 Pearl Harbor wasn’t the only place attacked on December 7th. Across the International Date Line–making it officially December 8th–lay Clark Field, which was pounded by Japanese “Betty” Bombers, then strafed by Zeroes. Some American pilots managed to counterattack. Two such heroes, LT. General USAF (Ret.) Joseph Moore and Colonel USAF (Ret.) Sam Grashio, are pictured in “Too Little Too Late.”

Lt. Joe Moore in his Curtiss P-40B Tomahawk at 22,000 feet over Clark Field is defending against the Japanese attackers as war begins in the Philippines. Over the smoke below is Petty Officer First Class Saburo Sakai’s Zero pursuing Lt. Sam Grashio in his P-40E. 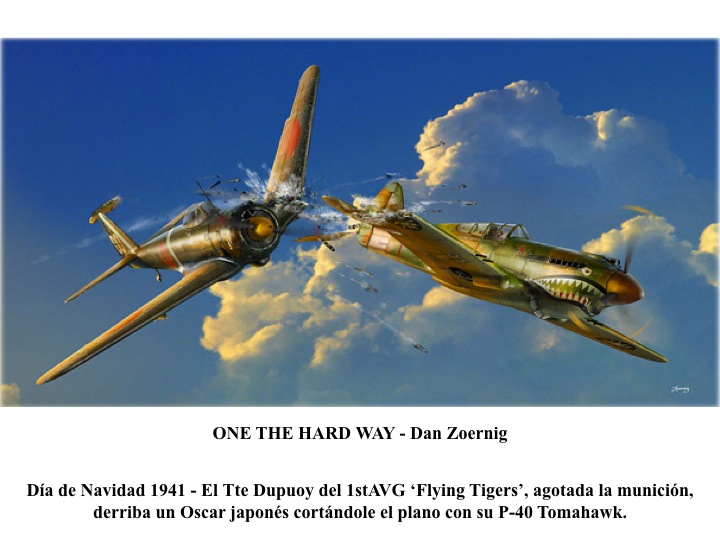 Christmas Day, 1941. American Volunteer Group Flight Leader Parker Dupouy finds his guns jammed during combat high over the Gulf of Martaban. Determined to bring down his adversary, he rams the Hayabusa Oscar of Lt. Hiroshi Okuyama of the JAAF 64th Sentai. Though he lost four feet of his wingtip and his entire aileron, Dupouy made it back to his base to fight another day. Lt. Okuyama’s aircraft, however, broke up in flight and carried him to his death. Dupouy went on to score 6.5 victories in the air before war’s end. 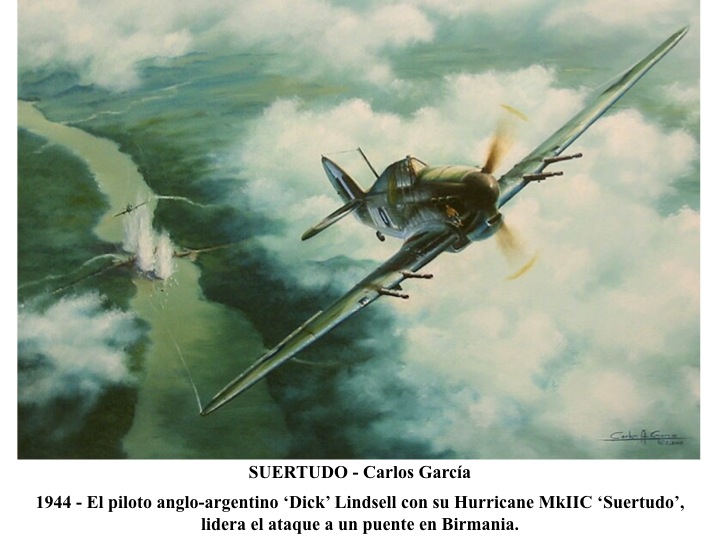 Burma 1944. Two Hurricane Mk IICs attack a bridge used by Japanese over the Ukhrul river. The lead ship is piloted by an Anglian-Argentinean pilot named “Dick” Lindsell DFC, Commander of Swarm 60. The airplane piloted by Lindsell was nicknamed “Suertudo” (Lucky), and was decorated with tapeworm painted on the side in the Patoruzú style. Its matriculation was MU-L.

Note: Patoruzú is a comic character created in 1928 by Dante Quinterno and is considered the most popular hero of Argentine comics. Patoruzú is a wealthy landowner with great state properties in Patagonia, and he is possessed of both superhuman physical strength and a charitable yet naive heart. The character was the first comic superhero in the world. 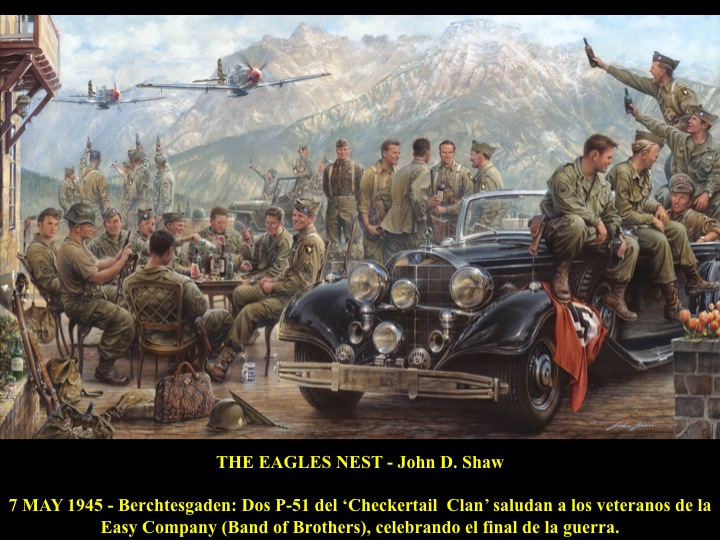 May 7, 1945. With Goring’s champagne and Bavarian beer, the veterans of Easy Company celebrate the end of World War II in Europe. Fate could write no better ending for the paratroopers who jumped into the darkness of Normandy, slugged through the mud of Holland, and froze in the woods of Bastogne. Now, in Berchtesgaden’s storybook Alps, P-51s of the “Checkertail Clan” cap the party as the Band of Brothers enjoy the spoils of war, the beauty of peace, and a toast to the heroes who fell along the way.