A Happening Event in the Discoverability Gamble

In previous Writer’s Desk posts I’ve mentioned the sine qua non (without which there is nothing) of publishing: discoverability.

And yes, that’s a made-up word for visibility, but it’s important for writers to establish and maintain a discipline-specific vocabulary. Like pilots do. It keeps non-pilots guessing and creates an aura of wonderment about aviators, those steely-eyed and adventurous creatures of the skies. But I digress . . .

With the exception of a NYT bestselling author, the challenge is the same whether you are legacy or indie published. If you don’t get out there and publicize your book, no one will. And publicity is like a lunch. It’s never free. Nor is it ever a sure thing, no matter what you believe or what anyone tells you.

I recently read a blog post about an author whose book had made it onto the granddaddy list with lots of buzz and an opportunity to appear on a major morning news program. You know the ones, with immaculately coiffed anchors providing a little bit of news and a whole lot of predigested pabulum.

But millions of viewers tune in, right? Some of them have to become interested in your book once they see you up there with the lights, camera, and action.

And yet the author honestly reported that he could not attribute a single sale to the appearance. He’s lucky he didn’t have to pay for the privilege, which brings me to the subject of doing that.

How do authors get the most return on their publicity dollar? Over the past six months or so, I’ve become convinced that it’s no different than shoving a silver dollar into a one-armed bandit and getting robbed.

Okay, so it’s a gamble. Which means that sometimes you win, and you can bet your life that anyone who finds a way to predict that won’t have to do anything else for a living. The rest of us pay our money and take our chances.

When I made the decision to put Pilot Error on consignment with BookPeople in Austin, Texas, and purchase an additional promotional package, I did so without expectation that I would sell enough copies to recoup my initial investment. If all I had done is purchase a blog tour, or a press release, or a featured banner on a website, I’d probably regret having chosen a publicity ploy that produced very little in return.

But the BookPeople option is different. Not that it has the potential for reaching more potential buyers, because it most certainly doesn’t.

But as I mentioned in a previous post, it’s a real bookstore. And this coming Friday evening at 7 p.m., I along with three other writers will participate in a Local Author’s Night book signing. With real books, the kind you can hold in your hands.

I’m excited about that, even though I fully realize that for all but celebrity authors, book signings are best described as mutual admiration meetings. The audience will consist of relatives, friends, and acquaintances who have already bought my book if they have any intention of doing so. And those in attendance for the other authors in a group event like this one probably won’t be convinced to plop down their hard-earned cash for a book by an author they’ve never heard of before and most likely never will again.

Just today, however, I read about a tactic that sounds really promising. Not for me, but for authors who by circumstance are able to avail themselves of the opportunity.

You’re supposed to schedule an awesome launch party where you live, and one in your hometown or where your mother lives. Moms have secret ways of influencing people to show up at events.

As the clock ticks down to the magic hour of what will undoubtedly be my only book signing for Pilot Error, at least until John Travolta contacts me about purchasing the movie rights, I’ve been working on my remarks. When the first page was blank, I pondered doing a reading, which apparently is the most common author-at-the-podium event.

But something about that didn’t sit well with me, and part of the indigestion derived from my loosely held opinion that fiction isn’t really meant to be read aloud. At least not by me. Not with my current voice anyway. If I were a baritone, maybe.

So for now, at least, I’ve written a first draft of remarks that connect my forty-plus years as a professional pilot and love of aviation with the compulsion to create good stories well told.

And why not? That’s the underlying concept of this blog, my words and my wings joined together in formation.

Speaking of which, I’m taking copies of my first non-fiction book, Wings On My Words, tales from the writer’s desk, to bundle with signed copies of Pilot Error at no extra charge.

How can anyone resist that? 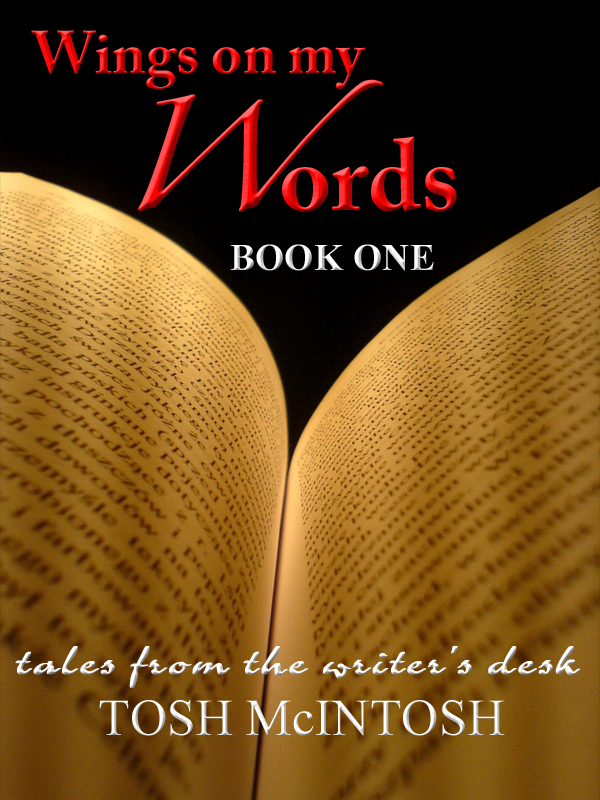