Credit for source photo used in the header: AP Photo/Ward Howes. (If you are looking at the Home Page fighter pilot header, click on the post title.)

The annual air races in Reno, NV, can be thought of as NASCAR on steroids. The typical race plane is a heavily modified WWII-era fighter whose sole purpose is to charge around an oval racetrack about 50 feet above the desert at 450-500 mph, complete the required number of laps, and cross the finish line before any of the other contestants.

In case you didn’t know, on Friday, September 16, 2011, a P-51 Mustang nicknamed “Galloping Ghost” crashed at Reno, creating a scene of horrific carnage. Within all the news reports and eyewitness accounts, the most common speculation is that a mechanical failure caused the pilot to lose control of the airplane. Without sufficient altitude to recover from the unusual attitude and in spite of what some are calling his efforts to avoid the crowd, the airplane slammed into the VIP section of the grandstand.

Previous posts in the Single Ship Logbook have addressed other crashes not to determine cause from the comfort of my writing desk, but simply to offer an opinion based on five decades of aviation experience. My approach here is to provide an explanation as to what might have happened and why. 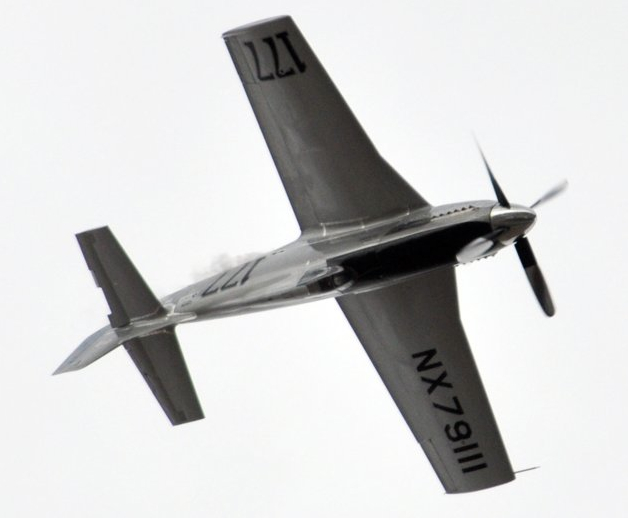 Note the rectangular “cutout” on the trailing edge of the left elevator. That’s not normal, and it provides clear evidence to support informed speculation as to the cause of the crash.

In the three-dimensional realm of flight, an airplane must be controlled along the horizontal, vertical, and lateral axes. If you think of a line drawn from one wingtip through the fuselage to the other wingtip, that is the lateral axis around which the aircraft rotates in pitch. When the pilot pulls aft on the control stick, the elevator moves up into the flow of air (the slipstream) over the elevator. The resulting force moves the tail down, the airplane rotates around the lateral axis and the nose rises.

As the speed of an airplane increases, the slipstream over the elevator creates more dynamic pressure. For any given deflection of the elevator, the resulting nose up or nose down force increases exponentially. To reduce the forces the pilot feels on the stick, a “trim tab” is fastened to one or both elevators. The amount of tab deflection above or below a neutral position in relation to the elevator creates a counter-acting force allowing the pilot to trim the controls to a “hand’s off” condition, generally considered the best technique for most flight regimes.

Trim tabs are usually attached to the “parent” flight control with a piano hinge and controlled from the cockpit by a mechanical or electro-mechanical connection. As with any flight control, “free play” is never a good thing. A standard ground preflight item to check the trim tab would be to move it up and down to determine how far it moves under static conditions. The tighter it feels, the better, because looseness can attract a very nasty aerodynamic event.

High dynamic pressure on an elevator and the attached trim tab combined with free play can create a very high frequency vibration known as “flutter.” Rapid up/down movement in which the tab slams against the stops will inevitably produce metal fatigue. Cracks weaken the piano hinge attachment to the elevator, and if undiscovered will only get worse with time.

I’ve never flown a P-51, much less raced one, so I have no idea if the pilot routinely trimmed the controls at or near a hands-off condition at race speeds. That said, and since this post freely admits the speculative nature of the subject, I submit that it’s very likely he did. With that assumption, let’s look at a possible cause and sequence of events.

High-speed flight at low altitude combined with excessive free play in the trim tab created an environment where flutter lives. The trim tab separated from the elevator, and in a split second removed the force holding the elevator in a trimmed position. It slammed up just as if the pilot had pulled back on the stick. The nose pitched up, subjecting the airplane and pilot to excessive “g” force. He likely blacked out, and from that moment until the crash, the airplane became the victim of inertia and gravity.

In addition to photographic evidence that the trim tab separated from the airplane, we have other supporting facts from that tragic day and a prior event.

In the 1998 unlimited championship race, a P-51 named “Voodoo” suddenly pitched up  from the course. The pilot regained consciousness as the airplane was passing 9000′. After landing, the “g” meter read 10 (that’s lot), and the reason for the event became abundantly clear. Note the missing trim tab on the left elevator. Photo credit http://www.warbird.com/voodoo.html 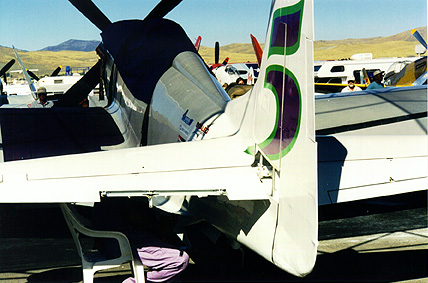 And from Reno we have this photo with two key pieces of evidence: Credit: Tim O’Brien, AP Photo/Grass Valley Union: 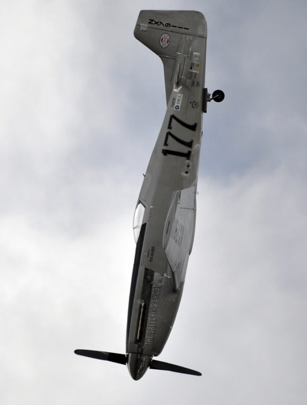 The retractable tailwheel is extended, which it would never be during a race. According to P-51 experts, high “g” forces can break the lock that holds the tailwheel retracted.

The pilot’s helmet is not visible in the cockpit. In addition to the sudden “g” force causing the pilot to lose consciousness and slump down in the seat, the seat supports can break, allowing it to fall to the bottom of the cockpit.

I’ve not seen video capturing the incident from beginning to end, and don’t know if it exists. I do know that a related video was removed from YouTube due to violations of their content guidelines.

But what I have seen indicates a flight path best described as a “barrel roll” in which the airplane pitches up under “g” loading simultaneously with a roll. From a straight-and-level condition, that maneuver would have created a flight path very similar to that documented by the video evidence immediately prior to the crash.

In closing, let me reiterate that this post in no way attempts to determine the cause of this tragedy in advance of expert investigation and analysis by the National Transportation Safety Board. It is nothing more than musings of an experienced aviator.