During my 20-year USAF career, the threat of a “RIF” ebbed and flowed with America’s need to use its military power as an instrument of national policy and influence events within the international arena. It might come as no surprise that the ebbing and flowing seldom occurred in sync with requirements. The pendulum was simply too ponderous to react quickly enough to match supply with demand.

As an aviator, I never felt seriously threatened by talk of a RIF because even though the leading edge of the sword may become dull in peacetime, the ability to sharpen it in a hurry requires a ready supply of forged weapons. Experienced fighter pilots in non-flying positions can be returned to the cockpit much faster than a newbie can be adequately trained. That said, I avoided desk jobs like the plague because I never wanted to do anything but fly fighters. And as I became more senior, I knew that the RIF protection of being an aviator would be far less effective the longer I was out of the cockpit. The answer to that was simple: don’t leave the “fighter pilot’s office.”

And although my ingrained love of being an aviator has had its fair share of undesirable consequences in later life, two things it accomplished were to provide me with two decades of strapping into truly awesome airplanes and qualify me for a modest military pension.

I’ve been retired from active military service for longer than I served, a condition that I consider to be a hard-earned and well-deserved benefit. And for all the years since I retired, I’ve always thought of myself as being just one brother among a fraternity of many. It turns out, however, that there are far fewer of us than I ever imagined.

A fellow retired fighter pilot sent me an article from “Central View,” by William Hamilton, J.D., Ph.D. Dr. Hamilton is a nationally syndicated columnist, educated at the University of Oklahoma, George Washington University, the U.S Naval War College, the University of Nebraska, and Harvard University. The article opened my eyes to another of the many ways that America fails to understand the true nature of military service. My friend introduced the article that follows with: Check this out, and if you think a RIF is not going to happen with our current leaders, think again. Text of the article follows:

This column explains why the current military retirement system is an incredibly good deal for the U.S. taxpayer and why the Obama Administration’s proposal to change it would defeat the currently successful reenlistment and retention rates for our volunteer armed forces. (Fair disclosure: the author served 20 years on active duty and is retired at half pay.)

Shortly after entering active duty, yours truly asked a seasoned personnel officer: “Why is my base pay only $222.22 per month [which is exactly the amount shown on my very first pay stub in the fall of 1964] when so many of my college classmates who went into civilian life are making twice or three times that?” What follows is a reconstruction of that conversation:

“Lieutenant, your low pay is because the military system is ‘deferred compensation,’ meaning you do not have to pay anything upfront toward retirement which will be ‘vested’ if you complete 20 years of active-duty service. So, we are ‘deferring’ your pay for you to draw later as retirement. If you make it through 20 years, you get half-pay for life and almost-free medical care. But if you do not complete 20 years of service, you don’t get any retirement. Nada, zip, zero.”

“Well, what could I expect to happen during the next 20 years?”

“After you reach about 10 years of service and you are at a point when you are most valuable to the military, you can expect the civilian bean-counters in the Pentagon to try to find ways of getting rid of you short of the 20 years you need to draw retirement. Do not give them any reasons to do that. If you get hurt, shake it off. Don’t report it. The bean counters don’t want retirees with medical problems. Also, the military has an “up or out” policy. Go to graduate school at night and on weekends to stay competitive with your peers. Do not give them an excuse to throw you out short of 20 years.”

“Okay, of all the second lieutenants who came on active duty this year, what percent of us will make to 20 years?”

“Out of your year-group, about six-percent of you will make it, meaning the USA will never have to pay a dime in retirement to 94-percent of you. It is a cruel deal for those who don’t make 20 years; however, it is a sweetheart deal for the U.S. taxpayer. For the troops who do make 20 years, they will have played ‘you-bet-the-best-years-of-your-life,’ and won.”

Returning to 2011: Today, due mainly to better battle-field care, 17-percent of the force is making it to the 20-year retirement mark. Even so, 83-percent who have served will never see a dime of their pay that was “deferred” for their retirement.

To make the system more “fair,” the Obama Administration proposes to “vest” a reduced amount of retired pay at 10 years of service. Guess what many of those with ten years of service and facing almost certain assignment or reassignment to Afghanistan or Iraq will do? Answer: Take a reduced retirement and leave military service.

In 1986, Congress reduced military retirement by 20%, undermining retention and readiness so badly that by 1990 Congress had to reverse itself. Predictably, the proposed Obama scheme will devastate retention rates while, at the same time, destroying a system that is more than “fair” to the taxpayers. [End of article]

I received the following image under the title of “Campaign Poster,” along with a quote from Winston Churchill: “Socialism is a philosophy of failure, a creed of ignorance, and the gospel of envy, its inherent virtue is the equal sharing of misery . . .”

I include it below not as a political statement about the next election, but because it just happens to reflect the future of America’s military if we continue to separate ourselves from the brave men and women in uniform by a “Wall of Indifference.” My post with that title can be found here. 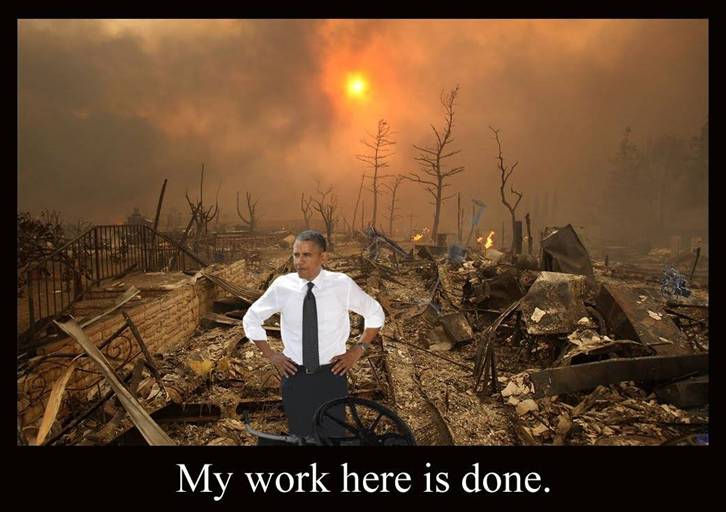 This entry was posted in Rants and Raves and tagged aviator, fighter, obama, pilot, retirement, RIF, USAF. Bookmark the permalink.

2 Responses to Institutionalized Reduction in Force – The Big RIF