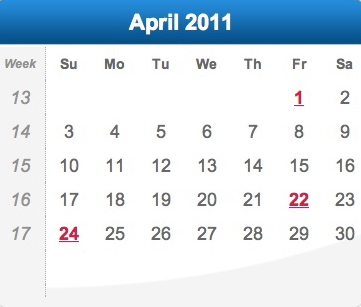 Where did the month of April go? I must have missed it, as evidenced by my query letter record, which indicates that I last submitted to an agent on March 29th. How in the world did that happen when I’d committed to sending out 3-5 queries per week?

The answer is embedded in the insidious allure of fantasy. All it takes is a single thought about having two full manuscripts and a partial out based on earlier queries and it’s so easy to ponder what it would be like to get the phone call and be offered representation.

Note that I didn’t say “get an email or written reply in a self-addressed, stamped envelope” (which always accompanies a submission by snail mail). That’s because the “word on the street” is that good news from an agent usually arrives over the phone. I can’t imagine what that is like, but it would probably be a good idea to have a chair handy when my legs lose their ability to support me.

In retrospect, the query war entered a month-long cease-fire because every time I thought about signing on to the QueryTracker website to pick the next agent privileged enough to receive my query [insert my chuckle here] the fantasy demon diverted me. Procrastination became my ally, and here I am a month later realizing that in reality it’s like a fifth column, sneaking around in the dark robbing me of initiative.

I’m not sure why, but yesterday that changed, and within a few minutes of research on QueryTracker, I read a comment from a writer who had just received a form rejection on a full manuscript that had been with an agent about four months.

This is analogous to being defeated in a battle and losing a huge chunk of territory. Disregarding the emotional reaction and disappointment, a very practical downside is the failure to gain anything useful from putting your complete manuscript in front of an agent.

Writers engaged in the query war have to expect rejection. You either learn to deal with it or surrender. The problem is that as the first shots are fired, rejections to submissions consisting of a query letter and (usually) a small writing sample will always be boilerplate. Agents hit the “auto-reply” button because they have no time to provide personal feedback to the hundreds of queries they receive in a single week. The writer, therefore, learns nothing of value to assist with the next query.

Was it the letter, the writing sample, both, or neither? It might be that the package was really good, but that particular agent simply couldn’t connect with the concept, or it didn’t fit with what she was looking for at that moment, or she had recently sold another novel similar to yours and couldn’t in good faith take on an author whose work would compete with that of one already on her list. Whatever the case, the writer receiving the rejection has to proceed blindly to the next agent, and this flailing in the dark gets very old very fast.

The goal of any writer at this point in the query war is to begin receiving requests for additional material because that validates the effectiveness of your submission package. You at the very least have the opportunity for getting more of your novel where it needs to be. It’s a big step, and one of the reasons it’s so important is the expectation that even if they end up declining to offer representation, agents who have requested additional material will tell you why.

That’s not to imply that personalized rejections to fulls or partials are any easier to accept. For most writers, they are even more disappointing because they represent the collapse of your dream with the knowledge that you took your best shot and failed. On the other hand, they can provide invaluable feedback.

If an agent generally praises your novel, gives you specifics that indicate she actually read it, and then says something to the effect of, “Unfortunately, I couldn’t generate the enthusiasm necessary to market it effectively,” it’s not unreasonable to conclude that she simply isn’t the best agent for you and your story. Your task then is to put that rejection aside and continue searching for the agent who is.

If the agent tells you specifically what she thinks detracts from her ability to sell your novel to a publisher, she may offer to take another look at a revised version, or you can ask if she would be interested. Some writers I know think revising-to-suit an agent’s preferences is a waste of time. I’m not convinced at this point that I’d give up the opportunity to publish my novel based on a relatively low success rate for revised submissions. I would, however, have to agree that the changes definitely improve the story or at least don’t remove the heart of it as envisioned.

Compare that, if you will, with having a full out with an agent for months and then receiving a rejection that is obviously nothing more than a form reply. To say that adds insult to injury is putting it mildly. We have a right to expect courtesy, and to be dismissed with a figurative wave of the agent’s hand like an afterthought is insulting in the extreme.

Though probably rare, it obviously happens, and the experience could be in my immediate or near future. This realization brought me back to earth yesterday, and I renewed the query war with three submissions. Successful writers have confirmed over and over again: without persistence, they would still be in the ranks of the unpublished.

That said, I also began the process of educating myself on self-publishing an ebook by reading about Smashwords, an ebook publishing and distribution platform. Even with less than a day of research, it’s like opening the door to a new world with fascinating possibilities.

I’m going to be posting follow-ups to my Writer’s Desk logbook entries on the query wars and two previous posts on the ebook alternative. Please check back soon for the next installment.