Another Reason I Don’t Play Golf

My aversion to a game in which people traipse around on manicured grass chasing after a little white ball that seldom goes where they want it to all the name of relaxation, and that is even less seldom anything but frustrating in the extreme, goes so far back that I can’t even remember its origins.

The picture at the end of this post isn’t as bad as the ones of the golfer who lost an arm to an alligator while trying to recover a ball in the water, but it reminds me of a lesson learned during one of my tours at Luke AFB, Arizona.

For any four-wheeling, or hiking, or hunting foray into the desert, we carried two of those huge Afro combs just in case we ran afoul of a particularly nasty cactus, the cholla, also known un-affectionately as the “jumping cholla.”

I can attest through personal experience that even given a wide berth, this cactus can instantly appear to spring from its natural position on the plant and bury itself in your person. Each spine has a barb on the end that resists extraction, so if you weren’t smart enough to wear protective (think apparel as hard as steel) clothing, you were in for some pain.

Anything you use  to pull it off instantly becomes the new host. I once saw a fellow fighter pilot lose all common sense and try to kick a piece of cholla (called a fruit or areole) off on one boot with the other. Before he was done, he had cholla spines covering every square inch of both boots. We took to calling him “Porcupine Feet”

The combs, however, if used very carefully, allowed us to pick off the offending hitchhiker with one comb and then use the other to flick it off.

Anyway, here is a golfer who is having an unusually bad day, and his experience validates my aversion to golf. Y’all be careful out there on the links. 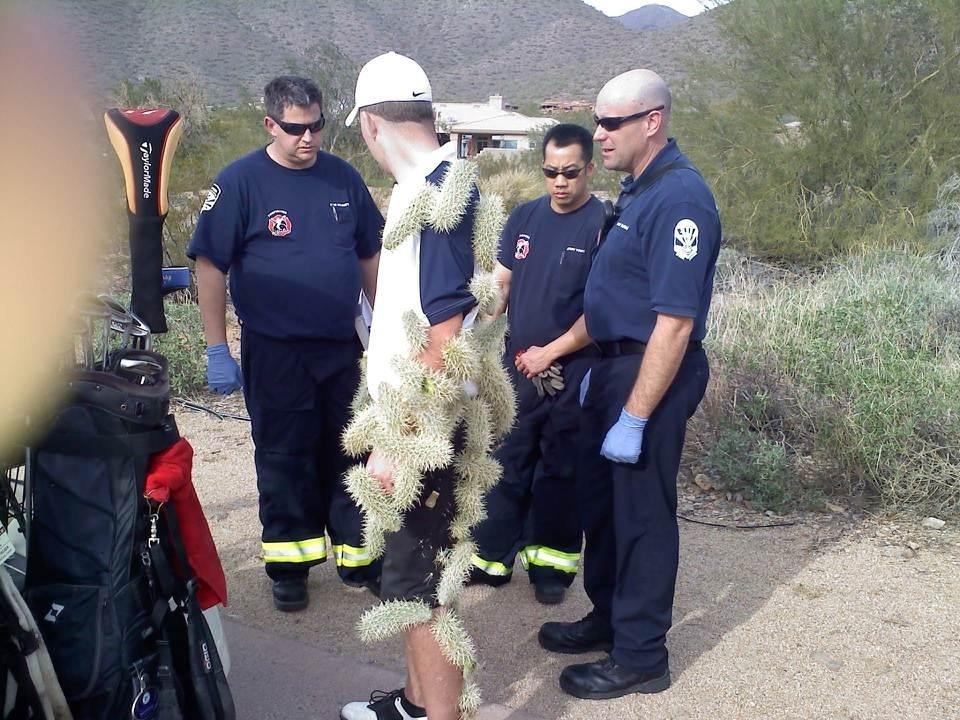 2 Responses to Another Reason I Don’t Play Golf