We continue the six-part series to showcase some of the finest paintings depicting key events in the WWII air war: 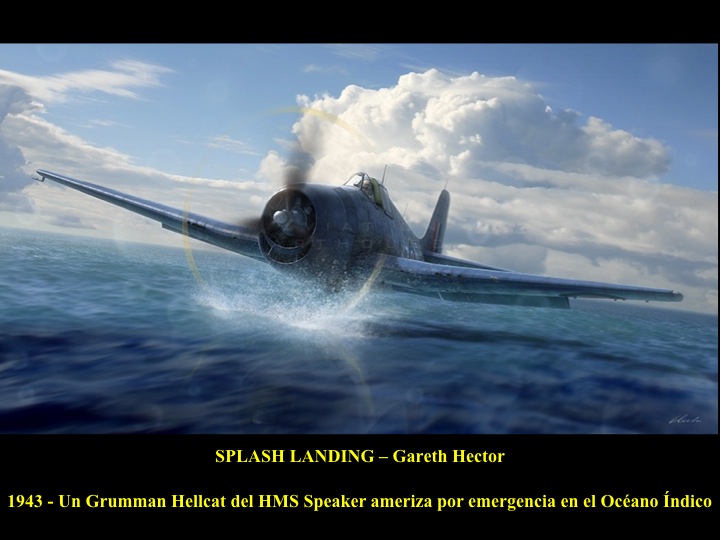 J.G. Boon von Ochssee, a Dutchman serving aboard the HMS Speaker, ditches his Grumman Hellcat JW867 into the Indian Ocean. He was picked up safely by a destroyer escort soon after and would continue flying Hellcats until the end of the war. 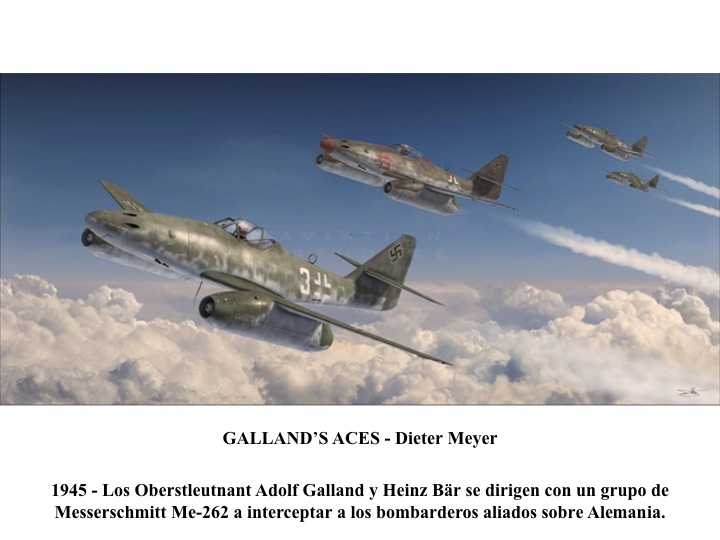 Adolf Galland and Heinz Bär lead a group of Me-262’s towards an encounter with Allied B-24’s high above the clouds. 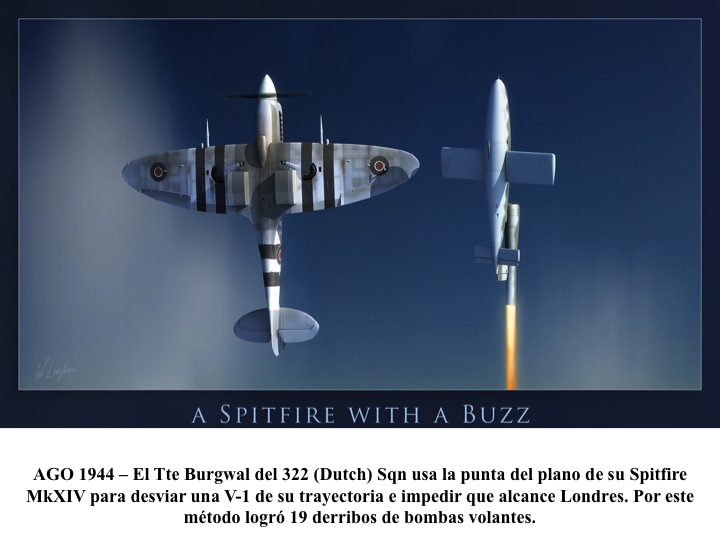 This Spitfire Mk.XIVe is shown as flown by Flying Officer Burgwal of 322 (Dutch) Squadron. Burgwal was a high scoring V-1 flying bomb killer with 19 kills.

The V-1 “Buzz Bomb”was an early pulse-jet-powered example of what would later be called a cruise missile.  Designed for terror bombing of London, V-1s were fired from “ski” launch sites along the French and Dutch coasts. The first V-1 was launched on June 13, 1944, one week after (and prompted by) the successful Allied landing in Europe. At its peak, over a hundred V-1s a day were fired at southeast England, 9,521 in total, resulting in 22,892 casualties, most of which were civilians.

This image depicts Burgwal using the tactic of tipping over a V-1 with his wingtip, which caused the bomb to crash because it had no ailerons or internal systems to compensate for the resulting departure from balanced flight.

In a strange quirk of fate, a Sunderland of 461 Sqn RAAF identification letter U, destroys submarine U-461, a type XIV tanker, one of three German submarines caught on the surface by Allied aircraft in the Bay of Biscay on July 30, 1943.

At extreme low level, Sunderland U braves a barrage of gunfire from all three circling German submarines to deliver a successful depth charge attack, sinking U-461 in a single pass. In an act of grace, the Sunderland pilot returned to the scene to drop a dingy to the U-boat survivors. 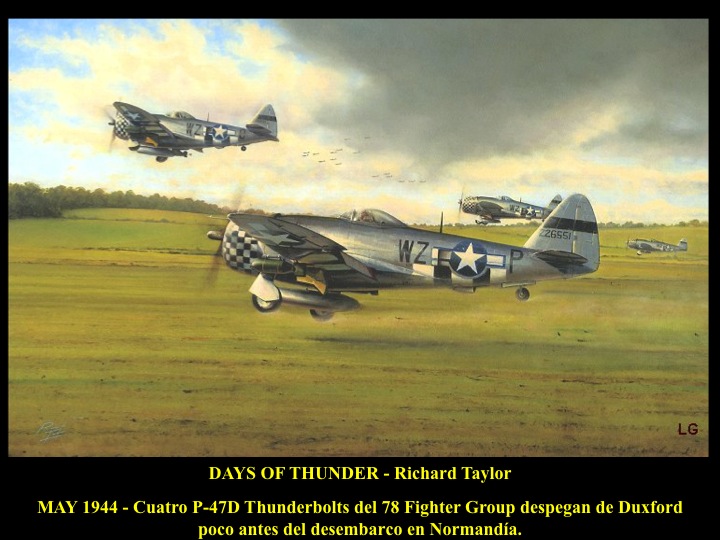 Duxford became home to the 78th Fighter Group when they arrived in England with their P-47B Thunderbolts in 1943. The objective of the American fighter units was to gain air superiority over the Luftwaffe in support of their daylight bombing campaign.

By 1944 they achieved their objective. Richard Taylor commemorates the valiant contribution of the 78th Fighter Group with a fine new rendition showing P-47D Thunderbolts departing Duxford en route to a low-level strafing mission on the coast of France. It is the spring of 1944, and with the Normandy invasion just days away, the Thunderbolts are already painted with invasion markings. 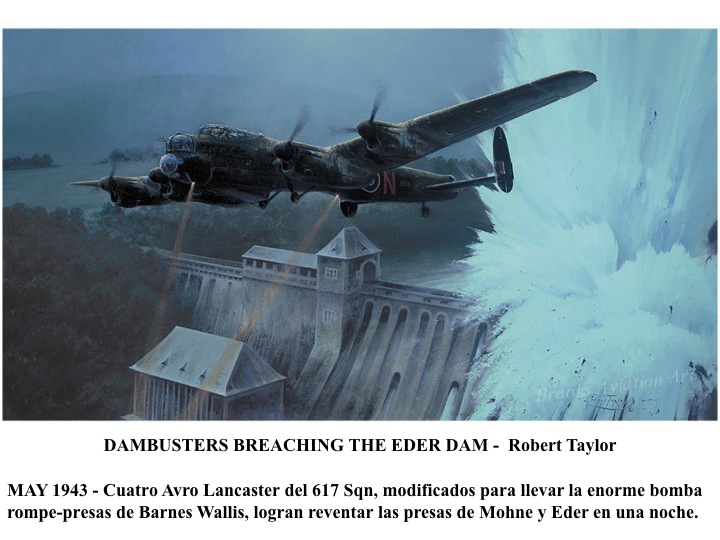 On the night of May 16/17, 1943, four specially modified Lancasters of 617 Squadron, under the leadership of Wing Commander Guy Gibson, successfully breached the Mohne Dam in Germany before proceeding 50 miles to the southeast to attack their second target, the mighty Eder Dam

Mist and fog swirled eerily over Eder Lake as the Lancasters circled overhead, their target barely visible in the valley below. Surrounded by high terrain rising a thousand feet above the lake level, the Eder was altogether a more testing target than the Mohne. The Lancaster pilots would need to dive steeply into the gorge that formed Eder Lake before undertaking a steep turn towards the dam.

As if this were not demanding enough in the dark of night, they then had to fly towards the target at precisely 60 ft above the lake at the exact speed of 230 mph before releasing their Barnes Wallis-designed hydrostatic bouncing bombs.

Pilots Shannon and Maudsley tried time and again to position their heavily laden bombers correctly before managing to release their weapons – but the dam still held. Success depended solely on Knight carrying the last bomb.

With time and fuel now a concern, Knight’s first effort to position, like Shannon and Maudsley before him, failed. But his second run favored the brave as he released his bomb with absolute precision, striking the wall at precisely the crucial point. With a tremendous explosion the Eder Dam collapsed.

Robert Taylor’s sensational new painting vividly shows the dramatic moment of impact. In the cockpit Knight and flight engineer Ray Grayston fight the controls to clear the dam, combining their physical strength to haul the lumbering Lancaster up and over the dam and to clear the high ground that lies ahead. Below and behind them, the second of Germany’s mighty western dams is finally breached.

Significant damage from flooding downstream and the loss of hydro-electric power severely hampered industry in the Ruhr valley until the dams were repaired and back in operation in September of 1943. 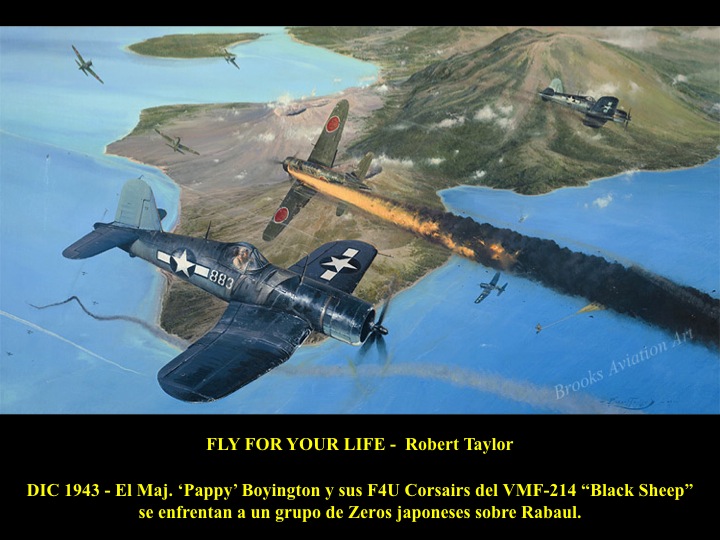 Desperate for new pilots in the South Pacific, in August 1943 the First Marine Wing appointed the unconventional fighter ace Major Greg “Pappy” Boyington to pull together a newly formed squadron from a mix of experienced combat veterans and untested novice pilots. The Marine Corps gave him just four weeks to turn this motley group into a fighting force ready for combat. Boyington succeeded beyond all expectations and the rest is history.

Equipped with the Chance Vought F4U Corsair, they called themselves “The Black Sheep.” Under Boyington’s leadership, they saw action at Guadalcanal, Munda, the northern Solomons, Vella Lavella, Bouganville, and Tokokina Kahili, and they were the first to lead fighter sweeps over the major Japanese base of Rabaul.

With typical mastery, Robert Taylor has brought to life an encounter over Rabaul in late December 1943, paying tribute to one of the US Marine Corps‘ most famous fighter squadrons and its outstanding leader. With the Japanese airbase at Rabaul visible in the distance, “Pappy” Boyington and his fellow pilots of VMF-214 tear into a large formation of Japanese Zekes. A series of deadly dogfights begins and one Zeke has already fallen victim to VMF-214’s guns.

For their outstanding contribution to the war in the South Pacific, the “Black Sheep” were awarded one of only two Presidential Unit Citations accorded to Marine Corps squadrons during the war in the Pacific.

Based out of Norway, Blohm und Voss V-138 Flying Boats were ocean-going reconnaissance planes used for spotting enemy convoys carrying supplies, troops and equipment. The aircraft was known by crews as “Der Fliegende Holzschuh,” or, “The Flying Clog.”

Although armed with a gun turret in front fired remotely by the pilot and a rear turret manned by a gunner, B&V 138s usually did not actively engage Allied surface shipping. Upon spotting targets, the crews notified bases on the coast for JU-88’s to bomb and strafe the ships.

All three engines on the B&V 138 were diesel-powered, and they landed in the North Atlantic for German U-Boats to surface and refuel them. Flight crews ate and slept while the plane was being refueled, often their only breaks from combat duty lasting for weeks on end.

July 7, 1944. Captain Clarence E. “Bud” Anderson slides in behind a trio of ME-109s flying in perfect formation, seemingly oblivious to the huge armada of bombers and fighters in the vicinity. 357th Fighter Group leader Tommy Hayes, spoiling for action, calls out on the radio, “Andy! Where are you?”

Focused on the business at hand, Anderson replies, “Can’t talk now . . . gotta shoot!” He triggers his guns with the mic is still keyed and everyone on frequency hears the rattle of his quad .50s. As depicted here, Anderson’s “Old Crow” gets good strikes all over the target, bringing his total kill to 12 1/4 in the air.

Note the black-and-white-stripe invasion markings on Anderson’s P-51 Mustang. Their purpose was to visually shout “FRIENDLY!” to other Allied fighter pilots, gunners in the bombers, and ground troops as well.

Please be on the lookout for Part Three of “Beautiful Aviation Art.”