We’ve all had experiences in which our world seems to shrink around us. You’re a few thousand miles from home on vacation and suddenly encounter face-to face someone you haven’t seen in thirty years. Pure coincidence, right? Or maybe you believe in the principle of six degrees of separation (also referred to as the “Human Web”), referring to the idea that everyone is on average approximately six steps away from any other person on Earth, so that a chain of, “a friend of a friend” statements can be made, on average, to connect any two people in six steps or fewer.

Whatever the case, I recently may have had the virtual equivalent of such a moment while sitting at my computer. A friend forwarded to me a link to a slide show with over fifty slides of paintings depicting significant aviation events of WWII. I don’t think I’d previously seen more than a few of them, and I viewed the presentation with a fascination that turned to near jaw-dropping shock when I reached the end. There I found the following notice: Autor: Yago F. de Bobadilla.

While that may be a very popular name in Spain, I have a sneaking suspicion (which as of this moment remains unsubstantiated) that I know the fellow.

During my tour as an F-4 Phantom instructor pilot at Luke AFB, Arizona, in the mid-1970s, Captain Yago F. de Bobadilla of the Spanish Air Force showed up for what was called an “exchange tour.” Yago and I became good friends. We shared many good dinners over a period of about three years, and his wife taught me how to make an authentic paella.

Yago’s family in Spain lived in a castle originally constructed in the 15th or 16th century, if I remember correctly, renovated many times over the years to add modern conveniences. He told me stories of playing with real suits of armor in mock battles defending the ramparts from marauding hordes. I had to be content with little plastic cowboys and Indians chasing each other around on the bed. There weren’t, however, any skeletons in our closets, and Yago couldn’t say that.

During one of the major renovations to the castle, the architect noted that the interior space didn’t quite match with what he expected based on the exterior dimensions of the structure. Investigation revealed a plastered-over staircase leading to a small space no one apparently knew existed. Inside they found a skeleton chained to a chair. Apparently, a very special form of revenge in the Middle Ages was to “wall up” an enemy alive within your home. I’ve never bothered to validate any of that, probably because the story seems to be an interesting blend of equal parts legend and fact as related to me.

The Bobadillas owned one of the oldest wineries in Spain, specializing in sherry and brandy, the most famous of which was Bobadilla 103. At one point in more recent history, the family had purchased a winery that had been idle for a number of years. Carved into the side of a hill, they found a cavern with barrels of brandy, each with three “X”s chalked on them. According to custom, each X stood for ten years of aging in the barrel, and no records existed to shed light on when the brandy was made. It was really, really good stuff, and the family decided to market it under the name of El Gran Capitan. I may not have that name quite right, but it’s not far off.

When Yago learned that he would be living in the United States for three years on the exchange tour, he asked his brother, who ran the everyday operation of the winery, if he could take some Capitan with him. I paraphrase, obviously, but, “No way,” replied the brother, “that stuff is far too expensive for you to be hauling off to America.”

Yago would not be deterred, so he snuck into the cavern, filled a quart jar with this marvelous brandy, and somehow brought it to the States without even his wife knowing about it. He kept it hidden in a kitchen cupboard for his personal enjoyment.

I knew nothing of this until one evening at dinner when we were having beef stew at his house. I complimented Yago’s wife on the meal and she replied with something to the effect of, “Well, I’ve made better, but Yago won’t let me use that recipe any more.” This comment led to a story about how, a few months prior, Yago had asked his wife at dinner what she’d done differently with the stew recipe and almost fainted when he learned that she had run out of sherry and just happened to discover the secret stash.

It became a family legend about a cup or two of ancient brandy that created “a stew fit for the King of Spain.”

But back to the art, I’ve been trying to find a way to upload the slide show into the website so you can access it from a post. That has turned out to be far more problematic than my limited knowledge can handle, so I’ve decided to insert the images within a series of posts and share the paintings in batches. This also allows me to insert a caption below each image to explain the significance of the incident depicted.

I hope you enjoy these and the subsequent parts of “Beautiful Aviation Art.”

Flight Lieutenant Donald J. M. Blakeslee of 133 Eagle Squadron exits his Spitfire MkVb at the Lympne airfield after his fourth mission of 19th of August 1942. On this date, during Operation Jubilee – the joint British-Canadian amphibious assault against German forces on the French coast at Dieppe, RAF Fighter Command flew hundreds of sorties in support of the landings.

Among the RAF units active during the day were the three all American volunteer Eagle squadrons, who between them accounted for 10 enemy aircraft destroyed, 5 probable and 12 damaged, Blakeslee himself being credited with two destroyed and two probables.

The following month, the Eagle squadrons were absorbed into the U.S. 8th Air Force as the 4th Fighter Group, under the leadership of Don Blakeslee. Mk I Spitfires of 610 Squadron flying a defensive patrol low over the White Cliffs during the height of the Battle of Britain in August 1940. 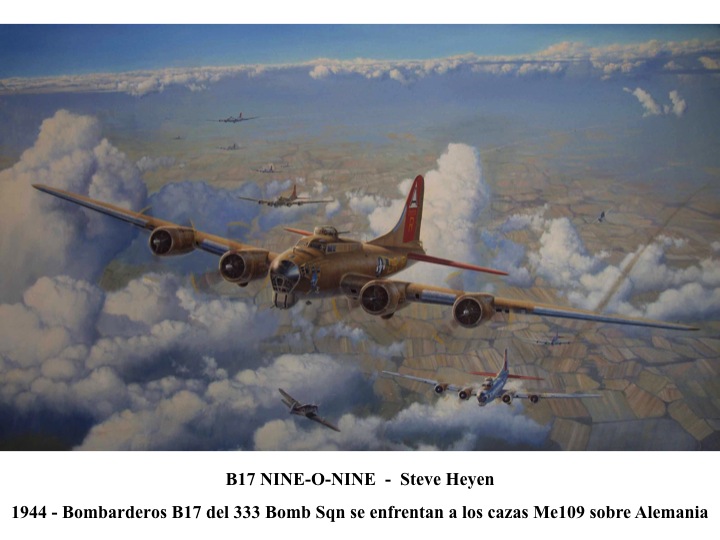 B17G-30-BO of the 323rd Bomb Squadron, 91st Bomb Group encounters home defense Me109s over Germany in 1944. (Note: The caption on the original slide incorrectly assigns this famous B-17 to the 333rd Bomb Squadron. See this post for an explanation and further information. 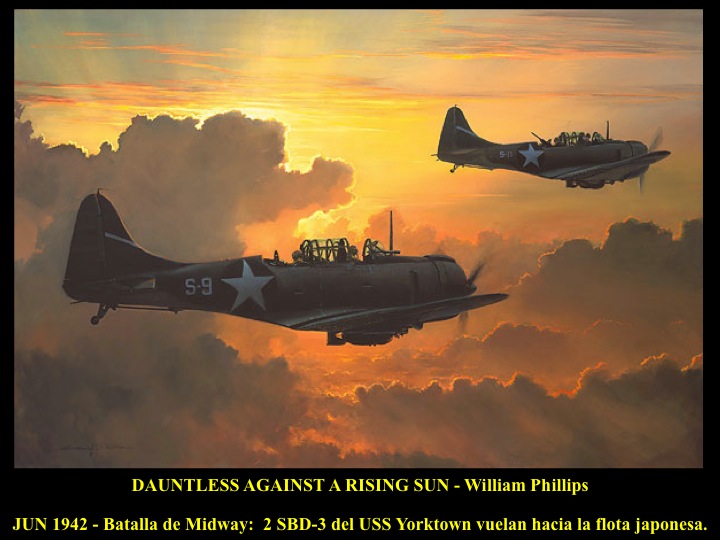 Two SBD-3s, S-9 and S-11 of VS-5, fly from the USS Yorktown aircraft carrier against the dark clouds of war and a rising sun, the symbol of the Japanese empire. In this case, the sun is symbolic of hope and the dawn of a new day as the tide turns in the Pacific at the Battle of Midway in June of 1942. 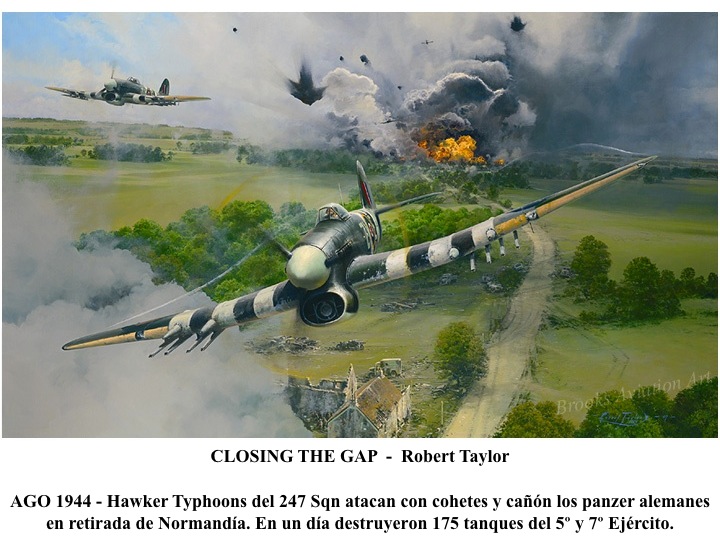 August 1944, RAF Hawker Typhoons of 247 Squadron, armed with rockets and 20mm cannon launch a series of devastating attacks against the German Seventh Army and Fifth Panzer Army in the Falaise Gap.

The German units had been almost completely surrounded by advancing allied ground forces, and contained within an area bounded by the four towns of Trun, Argentan, Vimoutiers and Chambois near Falaise.

The Germans began their retreat by the only remaining route, through the Falaise Gap, whereupon the allies began a sustained air assault in an attempt to prevent their escape, and with deadly results. On a single day the Typhoons would destroy 175 German tanks. 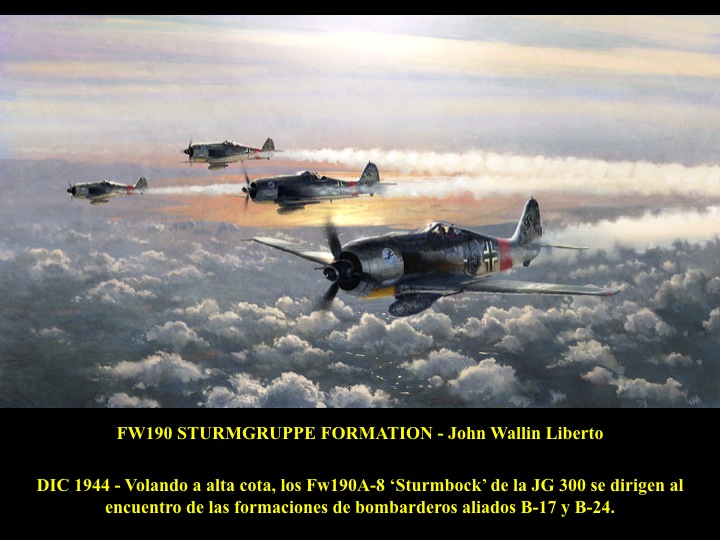 It gives a nice, icy mood, perfect for December 1944, when Dahl flew his “Blaue13” on bomber intercept missions with JG 300.

By the way, the clouds at the top of the image remind me of layers of cirrus, formed by dissipating aircraft contrails. I am not sure if it was intentional, but it’s a nice hint to their creators: the hordes of allied heavy bombers Walter Dahl and his Schwarm are hunting for. 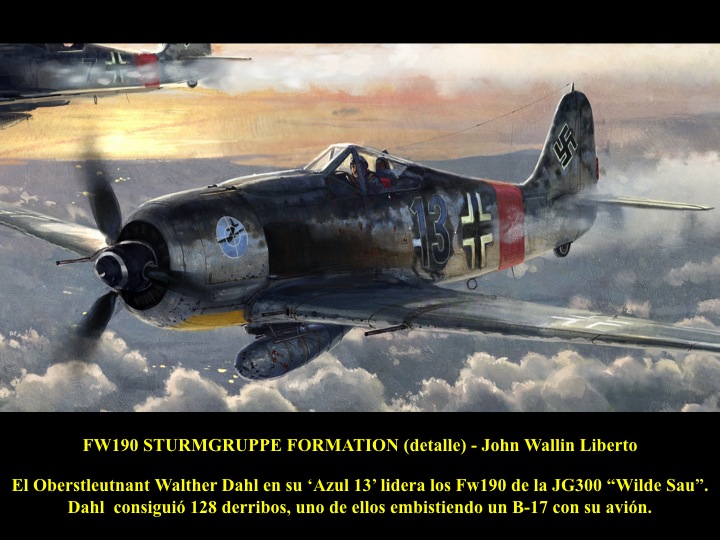 How cool is this? A zoom lens for a painting. 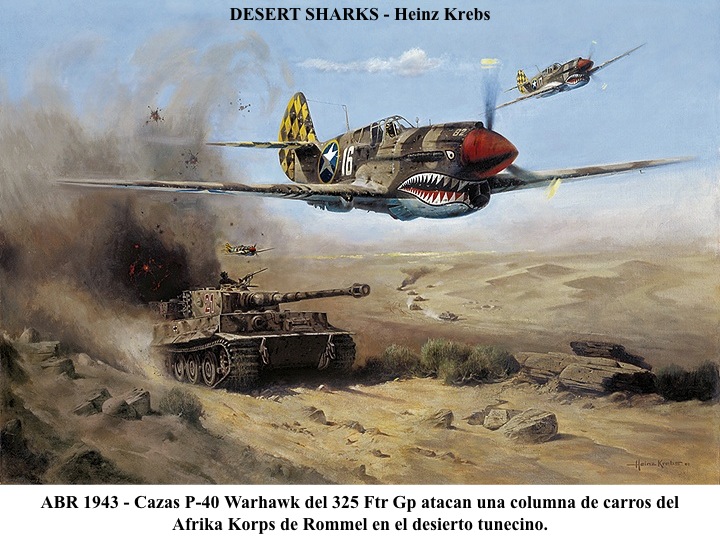 P-40 fighters of the 325th FG, 12th AF, the dreaded Checkertail Clan, as they attack a German tank column in the African desert during the defeat of Field Marshal Erwin Rommel’s Afrika Korps’ in Tunisia in the early spring of 1943.

Please be on the lookout for Part Two of “Beautiful Aviation Art.”