To say that USAF Undergraduate Pilot Training (UPT) shoved me and the other students of Class 66-D headlong into a brand-new world is a gross understatement. One day we were green-bean 2nd Lieutenants on an extended summer vacation. But after signing in to our first duty assignment and entering active duty, the time had come to put aside our civilian ways and learn up close and personal what it meant to be a military officer.

Even more unsettling was the reality of what we’d signed up for by wanting to wear the wings of a USAF pilot. At that time, we incurred a four-year active-duty commitment whether or not we successfully completed training. To avoid “washing out” became the underlying fear and prime motivator to succeed. No one wanted to endure the embarassment and shame of failing to make the grade.

Academic training filled the initial weeks. We knew that our test scores would be a factor in determining our final class standing, but the far more important objective was to learn everything we needed to know about the T-37 “Tweety Bird.” The aircraft and its systems came first in the classroom, followed by preparation for flight instruction.

I can’t remember the first time I heard the term “building-block approach” to training, but I’m pretty sure no one used it at Reese AFB in 1964, at least not within hearing of the students. But that’s what we got, and the T-37 flight training course followed a carefully designed syllabus composed of “phases.” For some reason I’ve long forgotten, the first phase was called “Contact,” and the objective was very straightforward: learn to safely fly the T-37 throughout the range of its capabilities. Formation, instruments (flying on the gauges without a visible horizon), navigation and cross-country, for example, would cone later. Phase briefings presented to all the students and instructors at one time would cover overall phase objectives and the individual sorties to ensure that everyone knew exactly what to expect. This probably bored the instructors to tears. Not so for us. Sitting in the briefing room for the Contact Phase Briefing, we hung on every word and tried to imagine what it would be like to strap on a twin-engine jet.

Anticipating the first flight created some sleepless nights. We’d been issued our flying gear, consisting of flight suits and two jackets, boots, gloves, parachute, helmet, and oxygen mask. I clearly remember playing with this stuff. That sounds crazy, but persistent nervousness will do that to you.

A classmate suggested that we blow off some of this tension by having a bit of fun. I went along with the plan, which was to lower the top on his convertible and drive onto the Texas Tech campus with both of us wearing our helmets, visors down and oxygen masks covering our faces.

He kept one part of the plan private, so I didn’t know about it until he pulled to the curb beside a large group of coeds. They stopped and stared. We stared back, and then he said, his voice distorted by the mask and his own embellishments, “Take us to your leader!” It sounds really stupid now, and in retrospect it was then as well.

Then came the momentous day when the first students saw their names on the squadron scheduling board for “The Dollar Ride.” The name derived from the tradition that the first flight was a freebie, at least in terms of being graded on the student’s performance. In return, we were expected to hand the instructor a dollar bill at the start of the briefing before the flight. I guess that meant not being yelled at was worth a buck. Within a short period of time, it would be worth every penny in my meager bank account.

In the midst of all this anticipation and excitement we discussed something that might seem totally irrelevant, but I guarantee you it was not: how to avoid barfing. The transition from flying a light single-engine trainer to the T-37 would put our equilbriums to the test.

Should I eat something before flying, or will I do better on an empty stomach? I decided to try the empty option, but after the first students completed their dollar rides and reported to the rest of us what it was like, I chose to flip a coin. Empty- and full-stomachers alike had gotten sick, which probably created a self-fulfilling prophecy: to acknowledge the possibility of filling a barf bag effectively guaranteed that we’d get the chance to try. 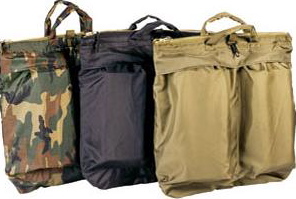 One of my classmates figured that mind-over-stomach was the best tactic. In practical terms, that meant not carrying a barf bag with him. He figured that without one, he’d be forced to control his nausea to avoid an even worse consequence of getting sick: students who soiled an airplane had to clean it up. When we saw him in the squadron after his dollar ride, looking about the same color as his green flight suit, we learned that a helmet bag could serve in an emergency.

When the big day came, with my trusty barf bag in a flight suit pocket, I tried the empty-stomach option. It didn’t work. I didn’t barf, but I’m not sure I’d ever felt worse. One the next flight, called Contact-1 (C-1), I prepared by eating breakfast. That didn’t work either.

By the time I completed C-7, it appeared that my year of flight training might be conducted in a constant state of nausea. Although I still had that original barf bag in my flight suit, trying to concentrate on flying while wishing I was dead didn’t bode well for my performance.

What a difference that made. Suddenly I had the freedom to learn without living in fear of losing my cookies in the cockpit. And that’s a really god thing, because I had a lot to learn.