A personal account by a participant of the raid concludes: 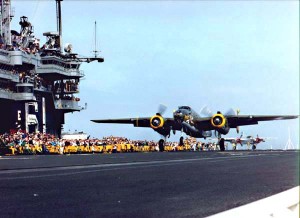 None of us had ever done this before! I said, “Williams first, Bourgeois second, Campbell third, Knobloch fourth, and I’ll follow you guys! Go fast, two seconds apart! Then count three seconds and pull your rip-cord!”

We kicked open the hatch and gathered around the hole looking down into the blackness. It did not look very inviting! Then I looked up at Williams and gave the order, “JUMP!” Within seconds they were all gone. I turned and reached back for the auto-pilot, but could not reach it, so I pulled the throttles back, then turned and jumped. Counting quickly, thousand one, thousand two, thousand three, I pulled my rip-cord and jerked back up with a terrific shock.

At first I thought that I was hung on the plane, but after a few agonizing seconds that seemed like hours, realized that I was free and drifting down. Being in the total dark, I was disoriented at first but figured my feet must be pointed toward the ground. I looked down through the black mist to see what was coming up. I was in a thick mist or fog, and the silence was so eerie after nearly thirteen hours inside that noisy plane. I could only hear the whoosh, whoosh sound  of the wind blowing through my shroud lines, and then I heard a loud crash and explosion. My plane! Looking for my flashlight, I groped  through my bag with my right hand, finally pulled it out and shined it down toward the ground, which I still could not see.

Finally I picked up a glimmer of water and thought I was landing in a lake. We’re too far inland for this to be ocean, I hope! I relaxed my legs a little, thinking I was about to splash into water and would have to swim out, and then bang. I jolted suddenly and crashed over onto my side. Lying there in just a few inches of water, I raised my head and put my hands down into thick mud. It was rice paddy! There was a burning  pain, as if someone had stuck a knife in my stomach. I must have torn a muscle or broke something.

I laid there dazed for a few minutes, and after a while struggled up to my feet. I dug a hole and buried my parachute in the mud. I started trying to walk, holding my stomach, but every direction I moved the water got deeper.

Then, I saw some lights off in the distance. I fished around for my flashlight and signaled one time. Sensing something wrong, I got out my compass and to my horror saw that those lights were off to my west. That must be a Jap patrol! How dumb could I be! Knobby had to be back to my east, so I sat still and quiet and did not  move.

It was a cold dark lonely night. At 0100 hours I saw a single light off to the east. I flashed my light in that direction, one time. It had to  be Knobby! I waited a while, and then called out softly, “Knobby?” And a voice replied “Mac, is that you?” Thank  goodness, what a relief!

Separated by a wide  stream, we sat on opposite banks communicating in low voices. After daybreak Knobby found a small rowboat and came across to get me. We started walking east toward the rest of the crew and away from that Japanese patrol. Knobby had cut his hip when he  went through the hatch, but it wasn’t too awful bad.

We walked together toward a small village and several Chinese came out to meet us, they  seemed friendly enough. I said, “Luchu hoo megwa fugi!  Luchu hoo megwa fugi!” meaning, “I am an American!  I am an American!” Later that morning we found the others. Williams had wrenched his knee when he landed in  a tree, but he was limping along just fine. There were hugs all around. I have never been so happy to see four guys in all my life!

Well, the  five of us eventually made it out of China with the help of the local Chinese people and the Catholic missions along the way. They were all very good to us, and later they were made to pay terribly for it, so we found out afterwards. For a couple of weeks we traveled across country. Strafed a couple of times by enemy planes, we  kept on moving, by foot, by pony, by car, by train, and  by airplane. But we finally made it to India. 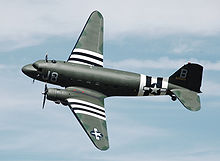 I did not make it home for the baby’s birth. I stayed on there, flying a DC-3 “Gooney Bird” in the China-Burma-India Theatre for the next several months. I flew supplies over the Himalaya Mountains, or as we called it, “The Hump,” into China. When B-25s finally arrived in India, I flew combat missions over Burma, and then later in the war, I flew a B-29 out of the Marianna Islands to bomb Japan again and again.

After the war, I remained in the Air Force until 1962, when I retired as a Lt. Colonel, and then came back to Texas, my beautiful Texas, first moving to Abilene and then settling in Lubbock, where Aggie taught school at MacKenzie Junior High. I worked at the S & R Auto Supply, once again in an atmosphere of machinery, oil  and grease. 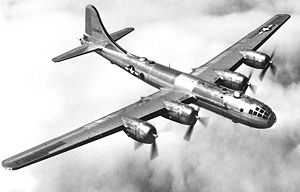 I lived a good life and raised two wonderful sons that I am very proud of. I feel  blessed in many ways. We have a great country, better  than most folks know. It is worth fighting for.

Some people call me a hero, but I have never thought of  myself that way. But I did serve in the company of  heroes. What we did will never leave me. It will always be there in my fondest memories. I will always think of the fine and brave men that I was privileged to serve with. Remember us, for we were soldiers once and young. 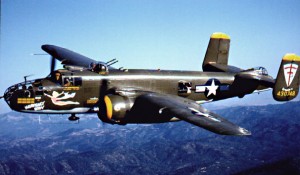 With the loss of all aircraft, Doolittle believed that the raid had been a failure, and that he would be court-martialed upon returning to the states. Quite to  the contrary, the raid proved to be a tremendous boost to American morale, which had plunged following the Pearl Harbor attack. It also caused serious doubts in the minds of Japanese war planners. They in turn recalled many seasoned fighter plane units back to defend the home islands, which resulted in Japan ‘s weakened air capabilities at the upcoming Battle of Midway and other South Pacific campaigns.

Though belated, I bid him farewell and Godspeed.