There was instant reaction from everyone in the room and food trays went crashing to the floor. I ran down to my room, jumping through the hatches along the way, grabbed my bag, and ran as fast as I could go to the flight deck.

I met with my crew at the plane, my heart pounding. Someone said, “What’s going on?” The word was that the Enterprise had spotted an enemy trawler. It had been sunk, but it had transmitted radio messages. We had been found out!

The weather was crummy, the seas running heavy, and the ship was pitching up and down like I had never seen before. Great waves were crashing against the bow and washing over the front of  the deck. This wasn’t going to be easy!

Last minute instructions were given. We were reminded to avoid non-military targets, especially the Emperor’s Palace. Do not fly to Russia, but fly as far west as possible, land on the water and launch your rubber raft. This was going to be a one-way trip! We were still much too far out and we all knew that our chances of making land were somewhere between slim and none.

Then at the last minute, each plane was loaded with  an extra ten 5-gallon gas cans to give us a fighting chance of reaching China.   We all climbed aboard, started our engines and warmed them up, just feet away from the planes in front and behind us. Knobby, Campbell, Bourgeois and me in the front, Williams, the gunner was in the back, separated from us by a big rubber gas tank.

I called back to Williams on the intercom and told him to look sharp and don’t take a nap! He answered dryly, “Don’t worry about me, Lieutenant. If they jump us, I’ll just use my little black broomsticks to keep the Japs off our tail.”

The ship headed into the wind and picked up speed. There was now a near gale force wind and water spray coming straight over the deck. I looked down at my instruments as my engines revved up. My mind was racing. I went over my mental checklist, and said a prayer: God please, help us! 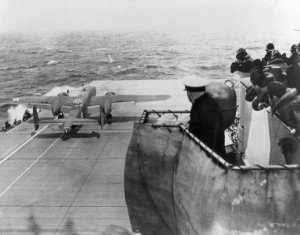 Past the twelve planes in front of us, I strained to see the flight deck officer as he leaned into the wind and signaled with his arms for Colonel Doolittle to come to full power. I looked over at Knobby and we looked each other in the eye. He just nodded to me and we both understood.   With the deck heaving up and down, the deck officer had to time this just right. Then I saw him wave Doolittle to go, and we watched breathlessly to see what happened.

When Doolittle’s plane pulled up above the deck, Knobby just let out with, “Yes! Yes!” The second plane, piloted by Lt. Hoover, appeared to stall with its nose up and began falling toward the waves. We groaned and  called out, “Up! Up! Pull it up!” Finally, he pulled out of it, staggering back up into  the air, much to our relief!

One by one, the  planes in front of us took off. The deck pitched wildly, 60 feet or more, it looked like. One plane seemed to drop down into the drink and disappeared for a moment, then pulled back up into sight. There was sense of relief with each one that made it. We gunned our engines and started to roll forward. Off to the right, I saw the men on deck cheering and waving their covers!

We continued inching forward, careful to keep my left main wheel and my nose wheel on the white guidelines that had been painted on the deck. Get off a little bit too far left and we go off the edge of the deck. A little too far to the right and our wing-tip will smack the island of the ship.

With the best seat on the ship, we watched Lt. Bower take off in plane number 12, and I taxied up to the starting line, put on my the brakes and looked down to my left. My main wheel was right on the line. I applied more  power to the engines and turned my complete attention to the deck officer on my left, who was circling his  paddles. Now my adrenaline was really pumping!

We went  to full power, and the noise and vibration inside the  plane went way up. He circled the paddles furiously while watching forward for the pitch of the deck. Then he dropped them, and I said, “Here we go!”

I released the brakes and we started rolling forward, and as I looked down the flight-deck you could see straight down into the angry churning water. As we slowly gained  speed, the deck gradually began to pitch back up. I pulled up and our plane slowly strained up and away from the ship. There was a big cheer and whoops from the crew, but I just felt relieved and muttered to myself, “Boy, that was short!”

We made a wide circle above our fleet to check our compass headings and get our bearings. I looked down as we passed low over one of our cruisers and could see the men on deck waving to us. I dropped down to low level, so low we could see the whitecap waves breaking. It was just after 0900, there were broken clouds at 5,000 feet and visibility of about thirty miles due to haze or something.

Up ahead and barely in sight, I could see Captain Greening, our flight leader, and Bower on his right wing. Flying at 170 mph, I was able to catch up to them in about 30 minutes. We were to stay in this formation until reaching landfall, and then break on our separate ways. Now we settled in for the five-hour flight. Tokyo, here we come!