I set up quarters with two Navy pilots, putting my cot between their two bunks. They couldn’t get out of bed without stepping on me. It was just fairly cozy in there, yes it was. Those guys were part of the Torpedo Squadron Eight and were just swell fellows. The rest of the guys bedded down in similar fashion. Some had to sleep on bedrolls in the Admiral’s chartroom. As big as this ship was, there wasn’t any extra room anywhere. Every square foot had a purpose. A few days later we discovered where they had an ice cream machine!

There were sixteen B-25s tied down on the flight deck, and I was flying number 13. All the carrier’s fighter planes were stored away helplessly in the hangar deck. They couldn’t move until we were gone. Our Army mechanics were all on board, as well as our munitions loaders and several back-up crews in case any of us got sick or backed out. We settled into a daily routine of checking our planes. The aircraft were grouped so closely together on deck that it wouldn’t take much for them to get damaged. Knowing that my life depended on this plane, I kept a  close eye on her.

Day after day, we met with the intelligence officer and studied our mission plan. Our targets were assigned, and maps and objective folders were furnished for study. We went over approach routes and our escape route towards China. I never studied this hard back at Trinity.

Every day at dawn and at dusk the ship was called to general quarters and we practiced finding the quickest way to our planes. If at any point along the way we were discovered by the enemy fleet, we were to launch our bombers immediately so the Hornet could bring up its fighter planes. We would then be on our own and try to make it to the nearest land, either Hawaii or Midway Island.

Dr. Thomas White, a volunteer member of plane number 15, went over our medical records and gave us inoculations for a whole bunch of diseases that hopefully I wouldn’t catch. He gave us training sessions in emergency first aid, and lectured us at length about water purification and such. Tom had learned how to be a  gunner just so he could go on this mission. We put some new tail guns in place of the ones that had been taken out to save weight. Not exactly functional, they were two broom handles, painted black. The thinking was they might help scare any Jap fighter planes. Maybe, maybe not.

On Sunday, April 14, we met up with Admiral Bull Halsey’s task force just out of Hawaii and joined into one big force. The carrier Enterprise was now with us, another two heavy cruisers, four more destroyers and another oiler. We were designated as Task Force 16. It was quite an impressive sight, and represented the bulk of what was left of the U.S. Navy after the devastation of Pearl Harbor. There were over 10,000 Navy personnel sailing into harm’s way, just to deliver our sixteen Army planes to the Japs, orders of the President.

As we steamed further west, tension was rising as we drew nearer and nearer to Japan. Someone thought of arming us with some old Model 1911 .45-caliber pistols they had on board. They were in such bad condition I went through that box and took several of them apart, using the good parts from several useless pistols until I built a serviceable weapon. Several of the other pilots did the same. Admiring my “new” pistol, I held it up and thought about my old  Model-T. 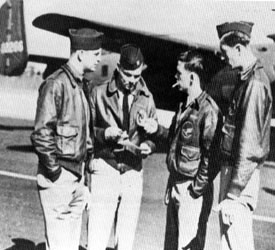 Colonel Doolittle called us together on the flight deck. We all gathered round, as well as many Navy personnel. He pulled out some medals and told us how these friendship medals from the Japanese government had been given to some of our Navy officers several years back. And now the Secretary of the Navy had requested us to return them. Doolittle wired them to a bomb while we all posed for pictures. Something to cheer up the folks back home!

I began to arrange my things for the flight, scheduled for the 19th. I packed some extra clothes and a little brown bag that Aggie had given me with some toilet items and a few candy bars. No letters or identity cards were allowed, only our dog-tags. I went down to the wardroom to have some ice cream and settle up my mess bill. It only amounted to $5 a day and with my per diem of $6 per day, I came out a little ahead. By now, my Navy pilot roommates were about ready to get rid of me, but I enjoyed my time with them. They were alright. Later on, I learned that both of them were killed at the Battle of Midway. They were good men. Yes, very good men.

Colonel Doolittle let each crew pick their own target. We chose the Yokosuka Naval Base about twenty miles from Tokyo. We loaded 1450 rounds of ammo and four 500-pound bombs, a little payback direct from Ellis County, Texas. We checked and re-checked our plane several times. Everything was now ready. I felt relaxed, yet tensed up at the same time. Day after tomorrow, we were going to launch when we were 400 miles out. I lay in my cot that night and rehearsed the mission over and over in my head. It was hard to sleep as I listened to sounds of the ship. 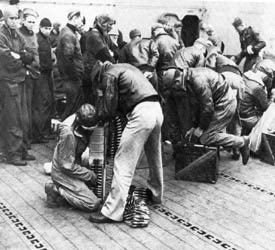 Early the next morning, I was enjoying a leisurely breakfast, expecting another full day on board, and I noticed that the ship was pitching and rolling quite a bit, more than normal. I was reading through the April 18th day-plan of the Hornet, and there was a message in it which said, “From the Hornet to the Army – Good luck, good hunting, and God bless you.”