A Pilot’s Widow Has No Regrets

The title of this post appeared in Ken Herman’s column in this morning’s AAS. Within a few minutes of reading it, I’m sitting at my computer writing this post, and I’m putting it in the Rants and Raves logbook because that’s exactly where it belongs. Need I specify in advance that it’s not going to be a Rave?

First, and especially as a pilot with almost a half century of professional and private aviation experience behind me, I offer my most sincere condolences to Chuck Miller’s wife and family for their loss. And nothing I write here diminishes my understanding and appreciation of the core message as expressed in the article. What would life be without the pursuit of dreams and doing what we love to do? That’s for each of us to decide, but we can probably all agree that regrets often identify lost or missed opportunities.

My beef is with Herman’s totally unsubstantiated and prejudiced implication that the adjectives “home-built,” “kit-built,” or “experimental” when used to modify “airplane” should create more concern for safety than the adjective he didn’t use by way of comparison, “certificated.”

What’s that all about, anyway?

If you want to build airplanes and sell them to the public, you have to comply with all the Federal Aviation Administration regulations governing the process from inception to the end of the assembly line. But if you want to build an airplane for yourself, you can do it beginning with a blank sheet of paper and design it, buy the materials, and do all the construction. FAA regulations govern this process as well, but not to the same degree as for certificated airplanes. At specified points during construction, an FAA inspection must be performed to ensure compliance. You can also buy plans for an airplane someone else has designed, or buy a kit for an airplane they have designed and produced the materials you will need.

The construction of Chuck Miller’s airplane had met all the requirements to be considered airworthy. Does that mean something might not have gone wrong mechanically to cause this tragedy? Of course not. Nor does it mean that because his airplane by regulation had to be clearly identified as EXPERIMENTAL that it was any more likely to experience a mechanical malfunction than if he had taken off that night in a certificated airplane.

And that’s the core argument of this post. Herman is welcome to his opinions and his status as a columnist clearly establishes that he has an audience for them. But he does his readership a disservice in this column because his attitude is based upon ignorance. 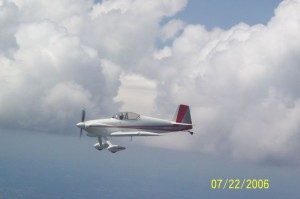 Read my lips, Ken: experimental airplanes do not as a category have a worse safety record than certificated airplanes.  And in this case, unless you have researched the NTSB website for details on their investigation and can point to a cause directly related to mechanical malfunction as a result of poor workmanship or using faulty materials, you have no business implying that Chuck Miller and his wife were taking any greater risk with his RV-7A than he would have in any factory-built airplane.

And here’s an offer to Ken Herman: come fly with me in one of my experimental airplanes and let me educate you. Then write about that. But let me warn you in advance. For many people, the experience opens up a brand-new world because flying can be like an incurable blood disease. And the only treatment is more flying. There may not be an ounce of the aviator in you, but at least we might be able to eliminate the misconceptions at the core of your column.